Surprise! Parades Are Actually Fun, At Least When There Are Cherry Blossoms and Dancing Involved

The concept of a parade does not thrill me…In fact, after a recent trip to Spain where my family and I got trapped by endless streams of parades thanks to a celebration called Semana Santa, I kind of wanted to avoid them for the rest of my life. No such luck.

Due to forces beyond my control, I had to see one more parade. This time it was the Washington, DC Cherry Blossom Festival Parade.

It’s not that I hate parades. They just don’t excite me. On Thanksgiving, my family and I will have the Macy’s Thanksgiving Day Parade in New York on the TV in the background. The ritual stems more from our nostalgia for our old home town than from wanting to watch giant balloons kiss the tops of skyscrapers. We are much more interested in the dog show that comes on right after it. 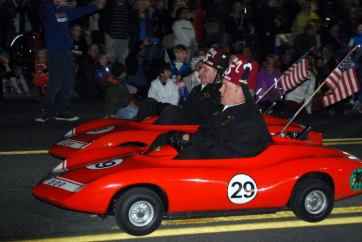 As a child, my family religiously attended our hometown Halloween parade. The parade was a stream of local high school bands, dance troupes, politicians and  businesses. My favorite was a chiropractor who chased after people dressed as vertebra in a spinal cord, trying to “realign” them. The finale always consisted of the same 3 things:  men with tall hats riding around in tiny cars, a giant mob of costumed children and a fire truck.

The parade had enough quirky charm to make it entertaining. It also helped that copious amounts of candy were thrown into the crowd from floats and cars.

But, in general, as an adult, the idea of sitting around and watching 700 marching bands play Sousa doesn’t appeal to me.

Therefore when my daughter told me her dance troupe would participate in the Washington, DC, national Cherry Blossom parade, I was excited for her, but not for me. I imagined sitting there for hours on the side of the road, in the unpredictable DC Spring weather, watching the feet of the people marching past.

The day started out a bit ominously. We crossed the bridge into Washington, DC and immediately hit a literal road block. It wouldn’t be the last. We had to weave and turn through the complicated roads of the city until we reached our pre-paid parking garage location. It’s possible a few unmentionable expletives escaped my mouth every time I saw a police car blocking a road.

Although we’ve been back in the DC area for almost 9 years, we have never even thought of attending the annual Cherry Blossom parade. It’s one of those things you don’t do when you live somewhere, like how in all the time we lived in New York we never once went to the statue of liberty or to the top of the Empire State Building.

But, my daughter had a gig in the show. She was to perform along with her dance troop and 400 other dancers, as part of a giant Cherry Blossom parade dance group. So we rose before the sun, something I’m almost allergic to doing, and went into the city.

We dropped my daughter off in a sea of neon pink and yellow shirts, the required costume for the dance. Since she’s only 12-years-old, and I am normal human mom, I still got that little twinge of worry when she disappeared into a crowd.

After we left her, my husband and I walked along the parade route, littered with blankets and folding chairs. We passed by a field of cherry blossom trees and stopped to admire them in the bright noon sun. Their petals fell like snow around us in the breeze. We both wished we could stay there, in the crisscrossing shadows of their branches, rather than sit for three hours on hard seats waiting for the opportunity to stare at a group of 400 dancers, trying to pick out our daughter. It sounded like a very un-fun version of Where’s Waldo.

Since my daughter was in the parade, we had access to the special riser seats at the end of the parade route. As we shuffled along the narrow curb toward our seats, a voice boomed out behind us from the crackling speakers. We soon discovered we’d be sitting right in front of the announcer booth.

Great, we both thought. Neither one of us looked forward to listening to two DJs from some radio station we don’t know jabbering for three hours.

We settled in for a long, boring time. And for a bit it was. The highlight for the first hour as we waited for the parade to reach us was a firetruck coming to cut a kite string stretching across Constitution Avenue so it wouldn’t clothesline the balloons. Fascinating stuff.

Then, finally, it started.  A police motorcade came booming and popping down the street followed by policemen on horseback. Then came the military brigades, marching in unison. We clapped and listened to the announcers describe the different groups, offering shockingly interesting historical details about each one.

I looked back at the booth warily. They were not as annoying as I anticipated.

A large tree shaded us from the increasingly hot afternoon, as a high school band flowed down the avenue. The came the first entertainment act. The float, covered in pink crepe paper stopped right in front of us, centered over two cherry blossoms painted on the black concrete road.

It was Silentó. If you live on planet earth, you will know him from the Whip/Nae Nae dance fame. He cautiously stepped off the float and took a mic from one of the parade organizers.

He stood right in front of us. I could have jumped over the two rows in front of me and reached him in about 10 seconds. (Not that I would do something like that. I have some self-control.)

He appeared a little timid at first as if he weren’t sure what to do. I imagined it would feel very exposed out there in the middle of the street. There are no fancy lights or a stage. The audience is just feet away from you, close enough to throw tomatoes and make them stick if they don’t like your performance.

His song burst out over the speakers. We were so close I could see the nervous creases on Silentó’s young face. Then he held up the mic and started to “sing.” I put sing in quotes because no one actually sang. The voices coming out of the speakers were clearly pre-recorded. I’ve seen enough of the Thanksgiving Day parade to know this is normal.

Still, it’s a bit surreal to watch someone mouth the lyrics of their own song. Plus, the Japanese ambassadors dressed in suits whipping and nae nea’ing on the float behind him with giant smiles plastered on their faces felt like something out of a strange, absurdist novel, albeit an adorable and very entertaining one.

I liked Silentó because he didn’t even really try to pretend like he was actually singing. After a few seconds, he seemed to get comfortable. He danced and occasionally remembered he had a mic in his hands.

After he finished and his float rolled off down the road, my husband and I turned to each other and exchanged a silent look. Then my husband said, “that was actually fun.” And I replied. “I know. We have the best seats.”

From then on, all of the negative, preconceived notions we had about parades started to fade into the shadows of the cherry blossom trees. We laughed at the odd choice of giant balloons. (Sam of Green Eggs and Ham fame and Smurfette?) We wiggled in our seats as performers sang or played instruments. We tapped our feet for the drummers. We clapped and waved when we saw our friends from Gottaswing, a lindy hop organization where we sometimes take swing lessons. And they waved back because did I mention, we were just feet from them. We could see the sweat on their brows from marching and performing down the parade route in the hot sun.

My husband and I were both a little shocked by it. The parade had the same kind of random quirk I enjoyed from my youth. Unicyclists. Skateboarders. Clowns and pirates dancing down the street together. (I would have thought they would be mortal enemies. Shows you anyone can get along.) They even had the men with tall hats in tiny cars! 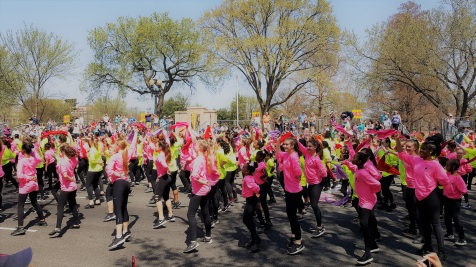 When it came time for our daughter’s dance troop performance, we actually didn’t have to play Where’s Waldo for too long to find her. Our seats were that good.

Afterward, we had to leave to collect her and missed the big finale. But we didn’t mind. The shadows were starting to get long on the ground and we’d soaked in enough of the floats and fun.

We went to our favorite place for lunch, Union Market, ate arepas and kept repeating our mantra, “I can’t believe how much fun that was.” And it was, a truly nice, wonderful day.

Perhaps it was the warm, sun-filled day after a particularly long spell of Spring cold. Perhaps it was the way the cherry blossoms with their dark branches and pale pink leaves contrasted with the bright blue sky. Perhaps it was the sheer joy on the faces of stiff-looking ambassadors performing the Whip/Nae Nae dance while Silentó lip synced in the middle of Constitution Ave in Washington, DC.

I’m not sure. It was likely all of it. A lucky perfect storm of all of these things, bringing fun, happiness and enjoyment to a perfect Spring day. It was a day that made me realize, that if you just sit back and let yourself, life can have truly perfect moments. We should try to capture those more.

3 thoughts on “Surprise! Parades Are Actually Fun, At Least When There Are Cherry Blossoms and Dancing Involved”