Reasons Why ‘Jane the Virgin’ Is the Best Show on TV

I don’t watch a lot of TV, which is why my blog is mostly about books, writing and the randomness of trying to balance all these things in my life.

You might be thinking to yourself, what a perfect way to start a blog about the best show on TV.

No? You’re skeptical about my credentials for judging TV since I admitted (very honestly I might add) I don’t really watch it?

Well, let me reassure you. I’ve been on this earth since we had those remote controls that were less “remote” and more clunky boxes attached to a TV by a long wire. Back then people lamented how TV was rotting their children’s brains. And I rotted my brain into a wormy brown apple on endless hours of Jem and the Holograms, Voltron and General Hospital. (Now we have smartphones to rot our brains. Aren’t we lucky there’s a never-ending supply of advancing technology?)

In addition to my former brain-rotting TV experience, I am also a writer. And, as a writer, I think I am able to recognize a good story, whether it’s on paper or on screen. (Don’t judge me based on Jem and the Holograms. I was young.)

How I find TV shows (or How TV shows find me)

Now that I’m older (and, sadly, Jem has retired) fitting TV into my busy schedule can be difficult. There are basically 3 ways I end up watching a show. Also, this is the first of 3 lists on this blog. I like lists. They’re fun, right?

To explain, this is how TV is watched in my house.

My husband sits down around 7:30 or 8:00 pm, after working, annoying our daughter until she screams at him and cooking dinner (not always in that order). Usually exhausted, he slumps down on the couch plays King of Avalon/Gin rummy/Dune on his phone. When he grows tired of that, he turns on the TV.

Meanwhile…one floor up, I’m tapping away on my computer, furiously writing with furry little puppy snuggled up to my side.

However, there are nights when I need a brain break and I’ll wander downstairs. And sometimes, my husband is watching a non-cooking related show. (I still don’t understand the appeal of watching people cook a bunch of stuff you can’t eat, it’s more like torture than entertainment.) And on a very rare occasion, I catch a glimpse of something that makes me want to sit down and watch too…and I get hooked.

More of my life revolves around airplanes than I might like. I spend a lot of time waiting for them or sitting on them. While I have copious amounts of books to keep me snuggly and happy, there are times when I need a more significant distraction. Like the time when a large man decided to lay his head on my shoulder and drool. No book could help me ignore that. I needed TV.

In cases such as this, I spend an hour trying to figure out how to use the airline entertainment app. This is usually followed by me getting angry when after all that effort the only show I can watch is ‘Crime Scene Investigation of Alien Encounters on the Moon’.  However, sometimes the limited TV options on a plane yield a non-procedural drama I actually enjoy…and I’m hooked.

3. I base it on literature (or previous TV show obsessions)

Not all of my TV choices come from random encounters with my couch or an airplane. Sometimes I seek out TV. For example, if there is a show based on a book I love, I’ll usually watch at least the first few episodes. Or, if I find out the creator of a show I once loved is making a new show, I will stalk the internet for spoilers and watch every second of the new show, even if it’s the worst show on TV…and I get hooked.

All of the current shows I watch fall into one of these categories.

So, my criteria for choosing TV shows is limited and, not surprisingly, so is the amount of TV I currently watch. (But, remember, brain thoroughly rotted, and maybe a little warped, from TV watching back when everything was still connected by wires.)

1. Shadowhunters (because I’m obsessed with the books and anything by extension, no matter how bad the acting.)

2. The Handmaid’s Tale (because I want to see what the future will be like and prepare myself. I also read the book.)

3. This Is Us (because, well, I think most of the world understands why.)

4. iZombie (because, even though I hate zombies, it was created by the person who also created Veronica Mars and one of the main characters, Clive, hates This Is Us. To quote him, “it’s emotionally manipulative.” I think that’s hilarious and a good example of why the show is great.)

5. The Marvelous Mrs. Maisel (because it takes place in retro NYC and is helmed by Gilmore Girls creator Amy Sherman-Palladino. I will watch anything she has ever done.)

7. Rise (because along with the creators of Gilmore Girls and Veronica Mars, I will watch anything from the makers of Friday Night Lights. Although talk about a show that is emotional manipulative!)

8. Jane the Virgin (because…well I’m about to detail that out. Oh, also, I started watching it on a plane.)

And…that’s pretty much it. I do also irregularly watch a few other shows (Supernatural, Blackish, Atlanta, SNL, The 100). But, my viewership is mostly based on wandering downstairs (you see where this is going), plopping down on the couch next to my husband and being too lazy to get back up.

So based on that very flimsy criterion for judging TV shows, I’d like to present my case for why Jane the Virgin is the best show on TV. Here comes list number 3.

List #3: My case for why ‘Jane the Virgin’ is the best show on TV

“I am judgy.” These are Jane’s words in one of the final episodes of season 4. When I heard these words I said, Jane is me. Not just because she’s judgy, which I definitely can be, but because she’s flawed.

Yes the young, virgin birthing Latina and I, the 40-year-old white woman who got pregnant through normal physiological means, are one and the same. OK, not exactly. But Jane is such an accessible character, that anyone could relate to her. She’s the every-woman who makes every woman feel important and special.

2. Jane’s a writer, who struggles (i.e., she deals with real-life issues people can relate to). 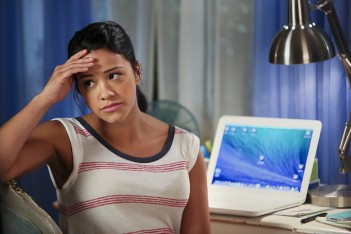 OK. OK. I may be partial to Jane because she’s a writer. But I will be honest. When Jane got her book deal and it looked like she would have insta-success, for a moment I wondered if the show was about to let me down. I detest shows where there’s some instant, easy accomplishment for a character after a long “struggle” that wasn’t actually very long. Oh, I’m a struggling artist/football player/singer/dancer just waiting for someone to discover me. Oh, hey, they did. Wasn’t that easy? Not for Jane.

The show didn’t let me down. Jane’s book doesn’t sell and she becomes fixated on the bad reviews. That scenario is very, very real to many people and not just writers. Very few people, no matter the field, find insta-success. Struggle is (nearly) universal.

You wouldn’t think a show where it’s not unusual for someone to have an evil twin could provide any insight into real life. But it’s just those kinds of juxtapositions that make ‘Jane the Virgin’ all the more real.

3. The show is a perfect example of satire.

For those unfamiliar with the show, it’s essentially a parody of a telenovela (aka, soap opera), but if those crazy things happened to mostly normal people. The show perfectly balances the absurd soap opera storylines with real-life issues.

Sure Jane’s love interest at one point is murdered by a crime lord who can change her appearance like the fake ghosts in Scooby Doo (aka, perfect masks that rip right off). But she also deals with real-life stresses many people face, such as worries over her grandmothers illegal immigration status and potential deportation, having enough money to pay the bills and a child who can be a bit rambunctious.

4. The show has a long game and it’s very clever.

Without giving away too many spoilers, it’s clear the show-runners don’t just, like many soap operas, throw out random ridiculous twists and see essentially what sticks with the audience. They have a vision and a plan that spans seasons, which makes the show feel cohesive and purposeful.

The show carefully chooses telenovela tropes to advance the plot and sometimes uses them as clever foreshadowing. For example, Jane’s father stars in a telenovela in the show. If he says something like, “No the writers can’t cut the part where Santos returns from the dead.” Then you know what might be lurking around the corner for the real characters in the show.

It’s also a show that sets up twists, hiding clues (aka, Easter eggs) for fans to ponder. In some cases, it can take multiple seasons for a twist to come to fruition, leaving everyone wondering if they are reading the clues correctly. That is a long-game if I’ve ever seen one. (If you’re a fan and already watch, I present exhibit A: the giant twist at the end of season 4.)

5. The show knows how to poke fun at itself.

One of my favorite lines in the last season (season 4) is when Jane’s current love interest, Rafael, suddenly becomes distant and pulls away. Jane confronts him and basically says, “What the hell, Rafael, you need to talk to me about this. You didn’t find out you’re my brother or something, did you?” To which I burst out laughing because up until that point I had considered they might go there. Rafael responds with a chuckle and tells her “No.”

It’s this type of exchange, where ‘Jane the Virgin’ acknowledges the absurdity of the show and then turns it around on the viewers by providing an even bigger, crazier twist. (Yes, there can be a crazier twist than finding out you love interest is your brother.)

And so that is my case for why ‘Jane the Virgin’ is the best show on TV. OK, maybe it isn’t the BEST. That’s subjective. But it’s damn good. And easy to binge watch (thanks Netflix!) I have I earned myself a little TV cred with my argument?

Now, those of you who watch TV, what is the one show I should be watching and am not?