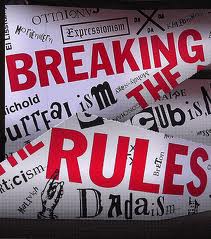 I have never been particularly good at following the rules. There’s a little monster inside me that whips out its angry claws anytime someone tries to set boundaries around what I can do or say, which made for some pretty rebellious teen years. (The clues were there early. I idolized Sarah Jessica Parker in Girls Just Want to Have Fun and thought it was perfectly acceptable to sneak out of your house to enter a dance contest.)

As an adult, I’ve relaxed my rule-breaking ways (and learned I should never, ever enter dance contests), but I have not abandoned my rebelliousness completely. Instead, I’ve turned it inward and started to explore rule breaking via my writing. Creatively, I prefer to explore characters and even writing styles that don’t adhere to the accepted standards. That’s really what makes writing fun.

But are there rules in writing that should always be followed, no matter what? Even the most lackadaisical grammarian would probably say yes. The constant criticism of the misuse of “your” vs “you’re” on social media tells me many people take their grammar very seriously. And, if you’re a writer, editor or reader, you probably have your own particular grammar pet peeves. (Mine are semicolons and run-on sentences.)

But, why do we cling to these rules? I’ve written on this blog before about “grammandos” – people who are a bit militant about grammar. And why maybe we should all relax and be more flexible with language. Writing and language shouldn’t be so stressful. Sometimes breaking the rules is fun! (Remember, if Sarah Jessica says so, it must be true.)

But are there some rules so sacred you should never, ever break them, right? Maybe not…

Let’s take a look at some “sacred” writing rules, relating to both grammar and style, that might be worth breaking.

Grammar Rule #1: When writing, you must use complete sentences.

General rules for complete sentences include:

Sentence fragments are particularly effective when trying to write in a first person to make it sound more like someone thinks or speaks. Sentence fragments can also set a tone or represent a feeling (e.g., excitement, confusion).

Here’s an example of a paragraph full of sentence fragments from the classic children’s book, A Wrinkle in Time by Madeline L’Engle.

“IT was a brain. A disembodied brain. An oversized brain, just enough larger than normal to be completely revolting and terrifying. A living brain. A brain that pulsed and quivered, that seized and commanded. No wonder the brain was called IT.”

If it’s good enough for a classic children’s author, I don’t see the problem. I think it’s perfectly fine to break this rule as much as you want!

Grammar Rule #2: When writing, you must use correct spelling. 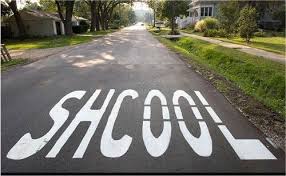 Oh. Spelling. (Like how I did that, NOT complete sentences. It’s fun, right?) This one seems like a no-brainer.

First, let me say that I am the Lois Lane of the spelling world. I suck at it.

As a young child, I spelled the word “wash” like it sounded to me. Back then a few of my words were tinged by a southern accent. Although much of Northern Virginia rebuffs the idea we’re part of the South, being below the Mason-Dixon line means the accent can creep in here and there. And being so close to the US Capitol, we say the word “Washington” a lot.

When I was young, I pronounced it as “Warshington.” Being severely and detrimentally hooked on phonics, I also spelled it the way it sounded with the “r.” At some point, I lost both the accent and figured out the correct spelling, but not before much ridicule for both, thus cementing this memory into my brain forever.

While it would not be good to spell Washington with an r in a newspaper article, in other instances it may not be wrong. For example, misspellings are often useful when trying to convey speech patterns of characters. If I were writing a book from the perspective of a character with a southern accent, you can bet Washington and all its variations (wash, washer, washing machine), would be spelled with an “r.”

In addition, sometimes misspellings can be used for puns or to play on words and ideas. When writing my book, The Travelers, I wrote a line that said something like, “No body would make her feel comfortable.” My editor kept changing it back to “Nobody” (one word.) I’d return it with a comment to keep it as two words and it got a little comical after a while. Finally, I explained that the character literally changes bodies and, therefore, she is not comfortable any physical body. I also wanted the sentence to have the implication that nobody (as in another person) could make her feel comfortable either. So while it had two meanings, the primary meaning was “No” space “body.”

Sometimes it can be fun to play with spelling…it just confounds your poor editors.

A conjunction, for anyone who hasn’t been back to high school English or seen School House Rock lately, is a like a little connector in a sentence: and, because, but, or, so, also. In school, at least where my daughter attends, children are still taught that sentences should never start with conjunctions. However, many people have come to terms with starting a sentence with “so,” “also” or “but.”

BUT, the use of the words “and,” “because” and “or” still tends to be less acceptable. Perhaps it shouldn’t be. It was good enough for the late, great Johnny Cash. “Because you’re mine, I walk the line.” Why not the rest of us?

“Because you’re mine, I walk the line.”

Ending a sentence with a preposition is also what I’d call an “old school” (i.e., archaic) rule. In doing a bit of research, it seems this rule was never really a rule at all. Yet it has persisted to plague the grammar world!

Apparently, English poet, and it seems general snob, John Dryden invented the “rule” (using a specious Latin analogy) in an attempt to try to make another poet (Ben Jonson) appear inferior. Apparently, the “rule” he concocted was so ridiculous that a linguist by the name Mark Liberman once said, “It’s a shame that Jonson had been dead for 35 years at the time, since he would otherwise have challenged Dryden to a duel, and saved subsequent generations a lot of grief.”

Maybe this is one rule we can not just break, but take off the books forever.

Not only are there grammar rules, but there are also generally accepted rules of style that define “good writing.” Here are a few style rules I’ve seen that maybe don’t need to be followed THAT strictly.

This particular piece of advice is most often attributed to Stephen King, who has a famous book on writing, literally called On Writing.  For King, apparently, the road to hell is paved with adverbs, which is a pretty drastic concept. I mean good intentions are really pissed right now because they thought they had that market cornered.

Not to argue with a great novelist like King, but I’m inclined to believe adverbs aren’t all bad. Like most things, when used sparingly and effectively, they can have a great impact. (See what I did there…I used adverbs! And I think it works.)

Adverbs also need to suit the style and voice of the book. I’d like someone to tell J. K. Rowling that adverbs are bad. She uses them quite often and King himself even said of her “Rowling has never met an adverb she didn’t like.” Yet her books are really, really, really popular and considered well-written…So, does that mean the road to hell is actually just paved with bad writing advice?

This can mean lots of things in terms of writing advice. Some take it to mean, literally, kill off your favorite characters. But more often it’s in reference to stepping back and looking at your work objectively and without sentimentality. This can mean reading your work for crutches in your writing, such as phrases you use repeatedly or use of colloquialisms/idioms/clique sayings (eg, “figurative language” such as “time is money”).

But even this rule is made to be broken. Perhaps those repetitive phrases reflect the character or the situation well and provide continuity to a story. In a book that jumps perspectives across several characters, using the same language specific to a character can be helpful for re-orienting a reader back to that character’s mindset.

And although I generally agree colloquialisms and idioms should be avoided, even figurative language can have a place in writing, particularly in dialogue or when used cleverly to make a point about a person or character. Steinbeck, Shakespeare, Fitzgerald all used idioms, again sparingly and appropriately. But they used them.

As they say, rules are meant to be broken…I think this is at least true in writing (and when sneaking out of the house to participate in a dance contest).

For more on the fun of writing rule breaking, check out this great article called “These Famous Authors Made It Okay To Commit Grammar No-No’s.“

18 thoughts on “Let’s be Rebels! Breaking the Rules…of Writing”