Journey into Fall: A Farm Full of Pumpkins, Aliens and Peter Pan

Today I walked outside, a bright sun shone like a spotlight on all the vibrant reds, mellow yellows, and perfect peaches still clustered in the trees. The rest of fall crunched on the ground beneath my feet. 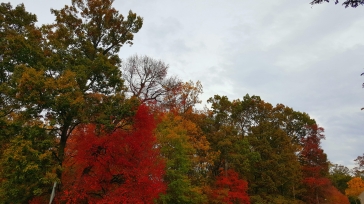 It reminded me of a passage from The Travelers.

“I waited at the edge of a narrow trail that snaked through town. This part dipped into a low field enclosed by a dense patch of trees. Each tree sprouted long fingers from its base. A few summer leaves still clung to the branches. The rest papered the ground and made it slick. A cool wind gusted and scraped at the leaves.”

Today even smelled like a perfect fall day – cool, sweet and crisp – like the bite of a fresh apple. Days like today make me feel sorry for people who don’t get to really experience seasons. Days like today are rare.

So, my family and I decided to embrace fall by going somewhere outdoorsy. We chose a local farm. But, not just any farm. We went to a magical place called Cox Farm in Northern Virginia. Yes, there were pumpkins and apples and cider donuts. We saw cows, piglets and pet goats. We watched our daughter float down plastic blue slides and swing like Tarzan on a rope ladder. It seemed like a lovely little farm celebrating fall. 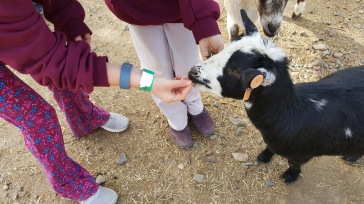 And then things got weird and even a little literary.

It all started with the hayride… We piled into the wagons pulled by an old tractor and a wonderful driver named Pam. Hay stuck to my boots and clothes. My daughter and her friend whined that they couldn’t see well. We all had to shift around so they could sit next to the rails to get a better view. So far, perfectly normal. We thought we’d ride around the farm, maybe see a few more animals, corn stalks, the changing trees of fall. It didn’t quite go that way.

Instead, after a countdown of 10 to 1 on large signs in the corn followed an odd combination of US Presidents, we were greeted by aliens running out of a crashed spaceship. (I can’t believe I just wrote that sentence. It sounds completely insane.)

Then after going through a wooded area filled with cutouts of monkeys hanging in trees, complete with jungle sounds, and some random scenes including Pilgrims, Care Bears and Strawberry Shortcake, we entered a witch’s lair. It even had live actors in costume. 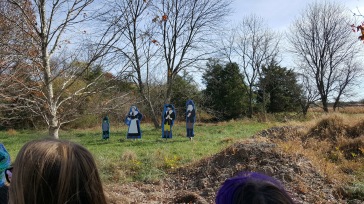 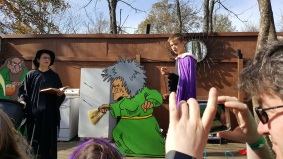 My daughter and her friend screamed out “Do you know Dagny?” (referencing my book) Luckily, the actors weren’t flummoxed by heckling 11-year-olds and stayed in character. (Aren’t the parents supposed to embarrass the kids, not the other way around?)

Next we saw a lovely horse and things seemed to be back on the right track for a hayride. But, the peculiar ride was not over yet. After the horse, we experienced a Wild West reenactment of sorts, had to answer a riddle to go under a troll bridge and had someone dressed as Supergirl pretend to help our tractor out of a mud pit. 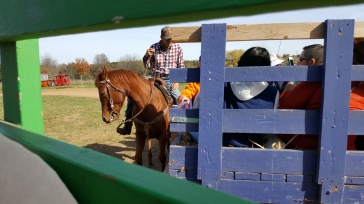 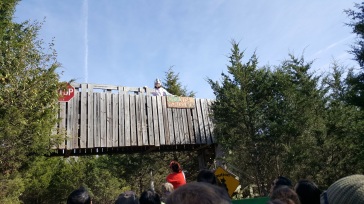 This all culminated in a ride through a barn that seemed like something that might come of Roald Dahl and Tim Burton having a baby (yes, a metaphorical baby, relax). It had unicorns, wizards, string lights and giant candelabras held up by weird silver arms. And at the end the tractor pulled us through the shallow part of a lake where we saw the tail of the Loch Ness Monster. I felt like I’d entered some very strange world where every book, movie or character archetype got dumped into one place, mixed up and spit back out.

The weird did not stop there. Next we went to the corn maze, except it was less maze and more corn. (Or corny I should say, albeit, the kind of corny that is fun not lame.) After walking through a school bus turned into one of those spinny fun house things that makes me dizzy, we groped blindly through a Mayan cave, watched a Greek statue take a shower, waved to some elephants, played with giant Dominoes and found hidden monsters behind doors of a weird structure while ‘Monster Mash’ blared through a speaker.

During our wanderings we also got to take a peek at the yellow brick road from Wizard of Oz while Wendy, John, Michael, Peter Pan and Tinkerbell flew headfirst along a fence and into a snack shack. (This is where the literary comes in. Odd references to books and movies can be found all over this strange “farm.” There is even an invisible man. It was kind of hard to take his picture, though. <wink, wink>)

At the end of our strange trip, a pumpkin man and woman waved us goodbye. To semi-quote the Grateful Dead, what a long strange trip it was, but totally worth the money. I even may want to go again because I’m sure I missed a bunch of book and movie references. Plus, I find those aliens quite intriguing. Best part? There were absolutely no zombies. Yay!

2 thoughts on “Journey into Fall: A Farm Full of Pumpkins, Aliens and Peter Pan”