On the Road Again: Bookish Places to Visit in Chicago

I’m headed to Chicago for work and so excited (mostly because Chicago is not Dallas and I am very sick of going to Dallas. No offense Dallas, you’re a cute town, but I need a change.)

So, as preparation, I’ve researched the best bookish places to visit in Chicago. I’m hoping I can get to some of these even on my <48 hour work timeframe! And I’ll bring The Travelers along for pictures, like I always do in case I get to do anything bookish and fun!

But first which of these writers was born in Chicago – do you know? (answer at the end)

The Literacenter, according to the website, is the “nation’s first shared workspace dedicated to literacy,” run by the Chicago Literacy Alliance. It all started back in 2009 when a small group of literacy nonprofits came together to discuss ways to share resources. Since then, it’s grown, significantly. In 2015, the CLA created the Literacenter, which provides literacy organizations in all stages of development with exciting, creative, and affordable space. It also organizes and provides space for events where members can connect with experts and each other.

Oh the library. How I love thee, let me count the ways. The Newberry Library in Chicago is one of the oldest, it opened in 1887. Not only does it have gorgeous, beautiful books lined along walls and reaching up to the ceiling, apparently it has equally as lovely architecture.

If the pictures I found are to be believed people even get married there, not just take pictures outside of it. Oh – why didn’t I think about getting married in a library. That would have been amazing!

And, fun fact, if you are familiar with Audrey Niffenegger’s The Time Traveler’s Wife, it is  Henry’s place of employment.

If you fell in love with Ernest Hemingway, which I did when I first read For Whom the Bell Tolls, then Chicago is probably one of the best places to learn about the great writer.

In the suburb of Oak Park, you can tour the home where Ernest Hemingway was born. There’s also a museum where you can learn about Papa as a high school football player and young writer.

Haunted by Holmes: The Devil in the White City Ghost Tour

I don’t read a ton of non-fiction. I’m much more of a fiction girl. But that doesn’t mean I don’t find a really good true story intriguing and the book The Devil in the White City, is one of my favorites.

Now I come to find out there is a tour of H.H. Holmes’ hunting grounds. Though only two of the original 200 or so buildings of the original “white city” remain today — the Art Institute of Chicago and the Museum of Science and Industry— from the 1893 World’s Fair. It also takes you through Holmes “murder castle” as well as the Jackson Park Lagoon and the Midway Plaisance (the site of George Ferris’ original Ferris Wheel).

Chicago might be my dream location for independent bookstores. (Be still my bookish heart!) I had no idea there were so many. There are even suggestions online for which routes to take to get to all of them in one day. Unfortunately, that won’t be possible as I’m on a tight 2 day schedule that includes a lot of work. But I may be able to sneak one in (if I can it’s going to be Women and Children First. I love the name and see their slogan. It’s the best!)

I’ll have to save the walking tour for my next visit.

Here are some of the indie bookstores in Chicago. 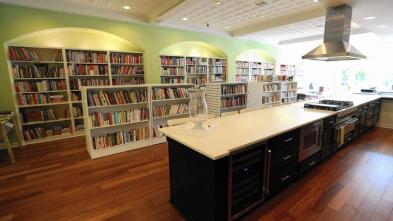 If this place is as wonderful as it sounds I may never leave. Food and books. Throw in some puppies and I’m hooked.

Read It & Eat, a culinary bookstore. (That name is so clever!) The store is half bookstore, half kitchen space. (This needs to become a thing near me, right now.) It’s modeled after Librairie Gourmande in Paris. The bookstore is filled with cookbooks, food history books, and food memoirs. The kitchen side is used for events and demonstrations with local chefs.

Established in 2015, Read It & Eat is dedicated to providing food lovers with exceptional culinary experiences through carefully selected books and events.

The book collection highlights selections on cooking and baking, organized by region, ingredient, technique, or specific diet; memoirs, travel, and food history; and beverages from coffee and tea to beer, wine, and cocktails.

There is also Wilde Bar and Restaurant, named after the famous hedonistic writer, Oscar Wilde. The quote on their website.

“Love and gluttony justify everything.”

So you already know, if you read the blog, one of the writers from Chicago is Hemingway. The other’s are

But, anyone listed had some connection to Chicago! Philip Roth and Kurt Vonnegut weren’t born in Chicago, but they went to it’s University!

2 thoughts on “On the Road Again: Bookish Places to Visit in Chicago”