This weekend in Washington, DC, there will be a march. Shocking I know. Marches have started to feel mundane. They happen constantly now, nearly every week there is a large one. I support marches and peaceful protest, but I can’t always attend them.

Since I likely won’t be able to attend the one this weekend, I thought I’d do my part to raise awareness about the cause. It’s a good one that most people should be able to get behind and it does still surprise me that even this topic can’t be unifying.

On July 22, 2017, people who support public education will rally in DC and walk down its much tread by activists streets in the March for Public Education.

This is the vision of the march.

Public Schools will be safe, inclusive spaces for learning and critical thinking, where all children discover their passion(s) and role(s) as citizens. As members of March for Public Education, we aim to advance policy and recursively address issues of: equity, inclusion, accountability, a well-funded institution and the right to organize.

Sounds pretty nice to me.

In honor of this peaceful march supporting a very important cause, I thought I’d write a Ten for Tuesday blog that celebrates the importance of public education and, specifically, the lifeblood of that institution: teachers.

Therefore, here are 10 books about teachers, both real and fictional, that will remind you how much they impact everyones lives.

Shocked by the teenage violence she witnessed during the Rodney King riots in Los Angeles, Erin Gruwell became a teacher at a high school rampant with hostility and racial intolerance. For many of these students–whose ranks included substance abusers, gang members, the homeless, and victims of abuse–Gruwell was the first person to treat them with dignity, to believe in their potential and help them see it themselves.

Inspired by reading The Diary of Anne Frank and meeting Zlata Filipovic (the eleven-year old girl who wrote of her life in Sarajevo during the civil war), the students began a joint diary of their inner-city upbringings. Told through anonymous entries to protect their identities and allow for complete candor, The Freedom Writers Diary is filled with astounding vignettes from 150 students who, like civil rights activist Rosa Parks and the Freedom Riders, heard society tell them where to go–and refused to listen.

9. Bridge to Terabithia by Katherine Paterson

Jess Aarons has been practicing all summer so he can be the fastest runner in the fifth grade. And he almost is, until the new girl in school, Leslie Burke, outpaces him. The two become fast friends and spend most days in the woods behind Leslie’s house, where they invent an enchanted land called Terabithia. One morning, Leslie goes to Terabithia without Jess and a tragedy occurs. It will take the love of his family and the strength that Leslie has given him for Jess to be able to deal with his grief.

This famous fictional story has not one, but two teachers whose stories show that teachers can teach us about more than math and science, they can also teach us about life.

Educating Esmé is the exuberant diary of Esmé Raji Codell’s first year teaching in a Chicago public school. Fresh-mouthed and free-spirited, the irrepressible Madame Esmé-as she prefers to be called-does the cha-cha during multiplication tables, roller-skates down the hallways, and puts on rousing performances with at-risk students in the library. Her diary opens a window into a real-life classroom from a teacher’s perspective. While battling bureaucrats, gang members, abusive parents, and her own insecurities, this gifted young woman reveals what it takes to be an exceptional teacher. Heroine to thousands of parents and educators, Esmé now shares more of her ingenious and yet down-to-earth approaches to the classroom in a supplementary guide to help new teachers hit the ground running. As relevant and iconoclastic as when it was first published, Educating Esmé is a classic, as is Madame Esmé herself.

Every Thursday morning for two years in the Islamic Republic of Iran, Azar Nafisi, a bold and inspired teacher, secretly gathered seven of her most committed female students to read forbidden Western classics. Some came from conservative and religious families, others were progressive and secular; some had spent time in jail. They were shy and uncomfortable at first, unaccustomed to being asked to speak their minds, but soon they removed their veils and began to speak more freely–their stories intertwining with the novels they were reading by Jane Austen, F. Scott Fitzgerald, Henry James, and Vladimir Nabokov. As Islamic morality squads staged arbitrary raids in Tehran, as fundamentalists seized hold of the universities and a blind censor stifled artistic expression, the women in Nafisi’s living room spoke not only of the books they were reading but also about themselves, their dreams and disappointments. 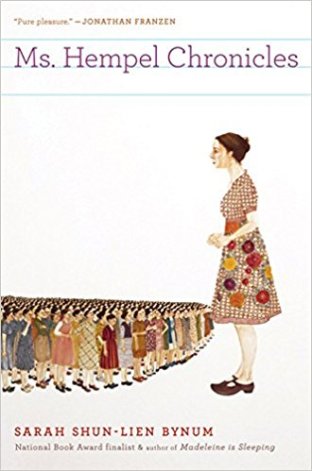 Ms. Beatrice Hempel, teacher of seventh grade, is new—new to teaching, new to the school, newly engaged, and newly bereft of her idiosyncratic father. Grappling awkwardly with her newness, she struggles to figure out what is expected of her in life and at work. Is it acceptable to introduce swear words into the English curriculum, enlist students to write their own report cards, or bring up personal experiences while teaching a sex-education class?  Sarah Shun-lien Bynum finds characters at their most vulnerable, then explores those precarious moments in sharp, graceful prose. From this most innovative of young writers comes another journey down the rabbit hole to the wonderland of middle school, memory, daydreaming, and the extraordinary business of growing up.

Sarah Shun-lien Bynum earned a 2004 National Book Award nomination for her stirring story collection about a much-beloved middle school English teacher. The eponymous educator approaches her newly-established career with a relatable welding of excitement and trepidation. Over eight vignettes, she gains her students’ trust and admiration, but — more importantly — starts building the confidence necessary to become the best teacher she possibly can someday.

Elaine Moore, a veteran teacher in Eagle River, Alaska, is a firm believer that the classroom is, first and foremost, a community—and that learning is best when shared in a circle of peers. When one of her students, ten-year-old Seamus Farrell, is diagnosed with terminal brain cancer, Elaine, her students, and her innovative methods of teaching are put to their most severe test. Elaine’s Circle is the true account of this small-town teacher who led her fourth-grade students through the biggest challenge of their young lives. This book provides a heart-wrenching, intimate look at the utterly remarkable achievements of this dedicated teacher, a supportive community, and a group of children who rallied to make Seamus Farrell’s impending death an unforgettable lesson about life.

4. A Lesson Before Dying by Ernest J. Gaines

Set in the fictional community of Bayonne, Louisiana, in the late 1940s, A Lesson Before Dying tells the story of Jefferson, a twenty-one-year-old uneducated black field worker wrongfully accused and convicted of the robbery and murder of a white man, and sentenced to death by electrocution. At his trial, Jefferson’s court-appointed defense attorney argues that Jefferson lacks the intelligence to plan a robbery, and that, even if he had been involved in the killing, sentencing him to death would be like putting a hog in the electric chair. In spite of this so-called defense, the all-white jury finds Jefferson guilty. To compound the horror of his situation, Jefferson internalizes the attorney’s racist depiction of him as a dumb animal.

Determined that Jefferson will die with dignity, his godmother (“nannan”), Miss Emma, turns to Grant Wiggins, a black teacher at the local plantation school, and asks him to teach Jefferson to be a man. Although convinced that there is nothing he can do, Grant reluctantly agrees to visit Jefferson in jail. Over the next several months, while Jefferson awaits execution, he and Grant forge a bond that enables both men to regain their dignity, reconnect with their community, and learn “the importance of standing.”

3.  Today I Made a Difference: A Collection of Inspirational Stories from America’s Top Educators by Joseph W. Underwood

Everyone remembers that teacher who made a difference. The one who went the extra mile to truly affect lives, whose lessons carried as much importance outside the classroom as inside. This book is a celebration of those teachers who continue to make an impact. A collection of stories from some of the country’s top educators, this book is a celebration of teachers’ work, and motivation for them to continue. Joseph Underwood has collected stories from each of the twenty-eight 2004 Disney Teacher™ of the Year honorees. And every story celebrates a different obstacle they overcame, the power and know-how needed to triumph, and the reward granted upon beating the odds. It’s the perfect gift for anyone in or considering the profession. This collection is sure to inspire, celebrate, and motivate those people who make the biggest difference in everyone’s life.

2. What Teachers Make, by Taylor Mali

Teacher turned teacher’s advocate Taylor Mali inspired millions with his original poem “What Teachers Make,” a passionate and unforgettable response to a rich man at a dinner party who sneeringly asked him what teachers make.

Mali’s sharp, funny, perceptive look at life in the classroom pays tribute to the joys of teaching…and explains why teachers are so vital to our society.

What Teachers Make is a book that will be treasured and shared by every teacher in America—and everybody who’s ever loved or learned from one.

1. Up the Down Staircase, by Bel Kaufman

When Sylvia Barrett arrives at New York City’s Calvin Coolidge High, she’s fresh from earning literature degrees at Hunter College and eager to shape young minds. Instead, she encounters broken windows, a lack of supplies, a stifling bureaucracy, and students with no interest in Chaucer. Narrated in “an almost presciently postmodern style” through interoffice memos, notes and doodles, lesson plans, suggestion-box insults, letters, and other dispatches from the front lines, Up the Down Staircase stands as the seminal novel of a beleaguered American public school system perpetually redeemed by teachers who love to teach and students who long to be recognized.

Thanks to all the great teachers out there in the public school system who work so hard every day. You all deserve books that celebrate your dedication and hard work!