What Makes a Book “Classic” and Five I Want to Read

Thanks to a relatively decent school system (and minoring in English lit in college), the classics line my bookshelves.

Although I think forcing the classics on kids can put many off reading, I always enjoyed classic literature. (Secretly, of course. To admit that in high school would have been social suicide.)

But how do you define “classic literature”? How old does a book need to be to be considered “classic”? I have the same problem with classic rock. The older I get the more music gets bucketed in there! Who decides what is “classic” anyway and why? Like when did R.E.M. become classic rock? No one told me! (And I object to that label. The music czars should take my opinion seriously.)

Simply typing “definition of classic literature” into a google search will return an endless array of opinions and parameters.

Wikipedia says “A classic is a book accepted as being exemplary or noteworthy, for example through an imprimatur such as being listed in a list of great books, or through a reader’s personal opinion.” (If it makes you feel better, I had to look up what “imprimatur” means. A declaration authorizing publication of a book or loosely to any mark of approval or endorsement.)

And journalist and writer Italo Calvino proposed 14 requirements for a book to be considered a classic. He looks so arrogant I don’t want to take his definition seriously. But unlike other nebulous definitions, his proposal has tangible (and intelligent) parameters. (OK, maybe he earned that arrogant expression…)

Based on these (and other) definitions and one could argue many books in or out of the “classic” moniker. Helpful. However, all of the definitions, no matter how specific or broad, have one theme in common: persistence. If people keep reading them, they become classic. 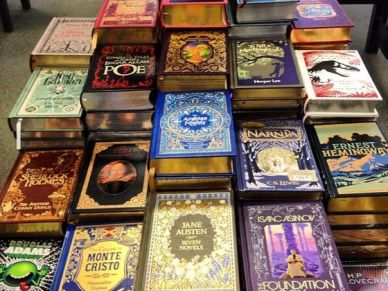 Some people may label the classics, and discussion of them by extension, dry. But the topic can be very, very hot, or at least hotly debated. In fact, one of the biggest debates often references antiquated ideas of racism and bigotry in classic literature.

Most recently the Laura Ingalls Wilder Award was renamed the Children’s Literature Legacy Award, citing the negative depictions of Native Americans and African-Americans in Wilder’s Little House on the Prairie books.

There’s another side to this hot debate, however. Some classics are banned or removed from classic teachings not because of offensive portrayals and stereotypes, but because it just makes people feel uncomfortable (and it usually relates to sex).

Anne Frank’s The Diary of a Young Girl has been pulled from libraries and school reading lists numerous times, not because it deals with Nazis and the Holocaust, but because she had the audacity to describe female body parts.

Even Alice in Wonderland was once banned for sexual content back in the 1900s. (We’re smarter now, right? 😉 ).

And you’ll love the reason The Wonderful Wizard of Oz was banned by public libraries in 1928. It’s because it depicted “women in strong leadership roles.”

I can tell you nothing gets me more riled up than sexism. Who says the classic are dry?

In 2007, Eastern High School in Louisville, KY pulled Beloved by Toni Morrison from the senior Advanced Placement (AP) English class at because two parents complained that the Pulitzer Prize-winning novel depicted the inappropriate topics of bestiality, racism, and sex.  The principal ordered teachers to start over with The Scarlet Letter by Nathaniel Hawthorne in preparation for upcoming AP exams. (So adultery with a Reverend is OK, depicting the realities of antebellum slavery, is not OK? I don’t need rules to understand the classics. I need rules to understand the world’s hypocrisy.)

In 1987, the Anchorage School Board banned the American Heritage Dictionary for its “objectionable” entries — particularly slang words, including “bed,” “knocker,” and “balls.”

In 1989, a school district in California banned Dr. Seuss’ The Lorax because the logging industry was insulted by the anti-deforesting plotline.

Best example of not letting grandmas have fun!

In 1990, a school district, again in California (seriously California what gives?) banned Little Red Riding Hood because granny drank some wine. “Showing the grandmother who has consumed half a bottle of wine with a red nose is not a lesson we want to teach,” said an official.

There are so many, I could go on and on…who knew book banning was so hilarious!

Throwing around the word “classic”

There may be no single definition of classic and there is no law preventing people from calling something a classic. (But really there should be. No, I’m just kidding, that would be wrong. Or would it?)

Far too many people (marketers?) toss the word “classic” into a description of modern novels. And if persistence is the only consistent theme to the definition, I’d have to say perhaps more time is needed before handing out such labels.

Examples (note, even if I liked these books, not sure they’re ready for the “classic” label, even with a qualification like “modern” or “contemporary”.)

“The Kite Runner has become a beloved, one-of-a-kind classic of contemporary literature.” (Really? I mean people have strong feelings about this book, good and bad, but classic? It’s earned that?)

This haunting novel about the dilemma of passivity vs. passion has become a modern classic. (in reference to The Perks of Being a Wallflower.)

Perhaps these will be classics some day. But I’d guess they don’t meet Calvino’s 14 requirements just yet.

The most popular “classics” I still want to read

Taking a look at all the lists of classic books online, I’m actually surprised how many I’ve read. That said, I definitely have not read them all. Here are five I think it’s about time I get around to reading.

Anyone else enjoy the classics? What are your favorites? Or which ones do you think are sorely overrated?