Journey in Sports: Pigskins and Paperbacks

I’m headed to a local high school football game tonight, the second one I will attend in a two week period. I went to my high school reunion in mid-October and channeled some Friday Night Lights action during the event. Although, for me, the highlight was the tour of the school, especially the library. You can tell because I took more pictures of it than anything else. Yes, my love of books manifests itself in strange ways.

But tonight’s excursion to watch people chase a person carrying a ball down a field (sounds kind of dumb when you say it like that, right?) marks the only second football game I’ve been to in the last 10 years. 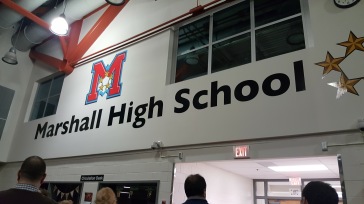 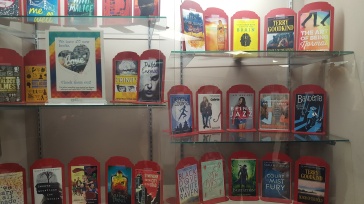 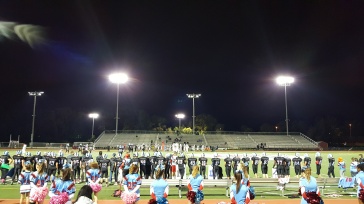 Now, to be upfront, I was a high school cheerleader (although no one believes me when I tell them that) and I attended Virginia Tech. In case you don’t know VT people like football, a lot. I should be a football expert, right? Wrong. That is not the case. I couldn’t even tell you what a 1st down means. Still football itself, even as only part of the background of my life, left enough of an impact for it to make its way into my debut novel, The Travelers. So there must be something to this rather barbaric pastime, I suppose.

Therefore, today, I’m going to embrace football and “tackle” creating a list of recommended YA reads featuring, you guessed it, football and things associated with it. (Full disclosure, I have not read all of these, but I trust the internet, B&N, Amazon, and Goodreads contributors who say they are amazing. And I have now added many to my “to read” list!) I also tried to find a little something for everyone.

Fun side note, do you know why a football is called a pigskin? Footballs were once inflated with the bladders of animals, including pigs. In later years, these animal bladders were placed inside a leather cover, giving rise to the term “pigskin.” GROSS!

Friday Night Lights: A Town, A Team, And A Dream by H.G. Bissinger

Return once again to the timeless account of the Permian Panthers of Odessa–the winningest high-school football team in Texas history. Odessa is not known to be a town big on dreams, but the Panthers help keep the hopes and dreams of this small, dusty town going. Socially and racially divided, its fragile economy follows the treacherous boom-bust path of the oil business. In bad times, the unemployment rate barrels out of control; in good times, its murder rate skyrockets. But every Friday night from September to December, when the Permian High School Panthers play football, this West Texas town becomes a place where dreams can come true. With frankness and compassion, H. G. Bissinger chronicles a season in the life of Odessa and shows how single-minded devotion to the team shapes the community and inspires–and sometimes shatters–the teenagers who wear the Panthers’ uniforms.

My assessment: Any book that spawned the amazing TV show of the same name (if you haven’t watched it watch it now) needs to be on this list. I miss you Coach and Tami Taylor!

I Was a Non-Blonde Cheerleader by Kieren Scott

Annisa Gobrowski has a problem – everyone at her new Florida high school is blonde. If Annisa’s New Jersey attitude didn’t make her stand out enough, her dark pixie cut sure does. Yet no lack of golden highlights is going to stop Annisa from making the best of Sand Dune High, especially once she checks out their competition-level cheerleading squad, and her uberhot, guitar-playing new neighbor Daniel.

I, Felton Reinstein, am Stupid Fast. Seriously. The upper classmen used to call me Squirrel

Nut, because I was little and jumpy. Then, during sophomore year, I got tall and huge and so fast the gym teachers in their tight shorts fell all over themselves. During summer, three things happened all at once. First, the pee-smelling jocks in my grade got me to work out for football, even though I had no intention of playing. Second, on my paper route the most beautiful girl I have ever seen moved in and played piano at 6 a.m. Third, my mom, who never drinks, had some wine, slept in her car, stopped weeding the garden, then took my TV and put it in her room and decided she wouldn’t get out of bed.

My assessment: I know I’m going to love a book that has a sequel called I’m With Stupid.

Until Friday Night (A Field Party Book 1) by Abbi Glines

To everyone who knows him, West Ashby has always been that guy: the cocky, popular,
way-too-handsome-for-his-own-good football god who led Lawton High to the state championships. But while West may be Big Man on Campus on the outside, on the inside he’s battling the grief that comes with watching his father slowly die of cancer.

My assessment: Alert – avoid if you don’t like a story about an adorable, “tough guy” brooding. If you like that sort of thing, this book might be for you.

Knights of the Hill Country, by Tim Tharp

A book for jocks or boys who feel uncomfortable expressing themselves any way but physically, Tharp’s novel focuses on Hampton, who displays a talent and control on the football field that helps compensate for his difficult home life. Meanwhile, he’s drawn to a girl who just isn’t acceptable for football stars like him, and is unsure how to handle his relationship with his best friend, Blaine, whose competitiveness and demands of loyalty are forcing Hampton to make some difficult choices.

Cheerleader Isobel Lanley is horrified when she is paired with Varen Nethers for an English project, which is due—so unfair—on the day of the rival game. Cold and aloof, sardonic and sharp-tongued, Varen makes it clear he’d rather not have anything to do with her either. But when Isobel discovers strange writing in his journal, she can’t help but give this enigmatic boy with the piercing eyes another look.

My assessment: Had to get one paranormal cheerleaders on this list! Come on!

One thought on “Journey in Sports: Pigskins and Paperbacks”