On Lincoln’s Birthday: The Eloquence of A Great Leader

Today, February 12, is Abraham Lincoln’s birthday. He’s the 16th President of the United States, creator of the Emancipation Proclamation, leader of people and all-around historical hero. He is viewed by many as one of the greatest, or maybe the greatest, President in US history. (He and George Washington tend to vie for that title depending on the list.)

Abraham Lincoln continues to inspire and capture imaginations even 150 years later. Just in a literary sense, there have been over 15,000 books written about him. He’s even been thrown into novels. My favorite is a re-imagining of him as a vampire hunter.

Many of us know his accomplishments. (Just to be clear, those accomplishments do not actually include killing blood suckers.) But, I’ve always been interested in Lincoln as a person. Maybe it’s the writer in me.

What made him such a great leader?

So, why, a century and a half later, do we still look to Lincoln as the paragon of Presidential virtue? I read up on this a bit. Not surprisingly, there’s no shortage of opinions on Lincoln’s character. The following traits were cited the most often: compassion, honesty, patience, dignity, intelligence, introspection, and eloquence. The last one – eloquence – this one burrows down deep inside me and creates that warm feeling in my soul because, it’s really about writing. Part of Lincoln’s greatness was his ability to verbalize thoughts, emotions and ideas in a way that spurred people to think.

The words of Lincoln

Many people probably think of eloquence and think of flowery language (Shakespeare, etc). But, the definition of eloquence is to be fluent or persuasive in speaking or writing or to clearly express or indicate an idea or concept. Especially for the time, Lincoln was very plain spoken, yet still eloquent. His ideas are clear. Concepts don’t necessarily need embellishment to be insightful. They just need insight.

So what are Lincoln’s most eloquent quotes? I’m sure that’s up for debate. Although it was very hard to choose, here are my 10 favorite. And, because I can’t help myself, I’ve added a twitter hashtag that might be included if President Lincoln lived today and was on Twitter. (If someone can imagine him as a vampire hunter, I can imagine him on Twitter.)

1. Nearly all men can stand adversity, but if you want to test a man’s character, give him power. (#truth)

2. And in the end, it’s not the years in your life that count. It’s the life in your years. (#nowthatsaproverb)

3.  A house divided against itself cannot stand. (#doweeverlearn)
4. Better to remain silent and be thought a fool than to speak out and remove all doubt. (#whytwitterisbad #irony)
5. When I do good, I feel good. When I do bad, I feel bad. That’s my religion. (#takenotesAmerica)

6. Character is like a tree and reputation like a shadow. The shadow is what we think of it; the tree is the real thing. (#savethetrees)
7. Those who deny freedom to others deserve it not for themselves. (#nomuslimban)

8. It is the eternal struggle between these two principles — right and wrong — throughout the world. They are the two principles that have stood face to face from the beginning of time; and will ever continue to struggle. (#alreadyonrightsideofhistory)

9. America will never be destroyed from the outside. If we falter and lose our freedoms, it will be because we destroyed ourselves. (#vampirehunterandprophet)

President Lincoln was a president who really did have the best words. Of course, when one has character, one doesn’t need to say that. Lincoln, a man of eloquence, at his core then, seems to be a writer, which makes me like him all the more. (Not that I needed another reason). 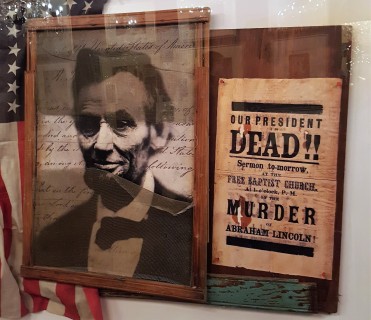 Sadly, like many great men, Lincoln paid a price for his greatness. He ushered a country through war, only to be murdered. No eloquent speech could save him from that fate.

Therefore, I’ll leave you with this poem that eloquently immortalized the sorrow of losing a man who embodies the true meaning of greatness.

O Captain! My Captain!
by Walt Whitman
O Captain! my Captain! our fearful trip is done,
The ship has weather’d every rack, the prize we sought is won,
The port is near, the bells I hear, the people all exulting,
While follow eyes the steady keel, the vessel grim and daring;
But O heart! heart! heart!
O the bleeding drops of red,
Where on the deck my Captain lies,
Fallen cold and dead.
O Captain! my Captain! rise up and hear the bells;
Rise up—for you the flag is flung—for you the bugle trills,
For you bouquets and ribbon’d wreaths—for you the shores a-crowding,
For you they call, the swaying mass, their eager faces turning;
Here Captain! dear father!
This arm beneath your head!
It is some dream that on the deck,
You’ve fallen cold and dead.
My Captain does not answer, his lips are pale and still,
My father does not feel my arm, he has no pulse nor will,
The ship is anchor’d safe and sound, its voyage closed and done,
From fearful trip the victor ship comes in with object won;
Exult O shores, and ring O bells!
But I with mournful tread,
Walk the deck my Captain lies,
Fallen cold and dead.