It’s the season of the carnival. And this weekend I had one goal and one goal only: brave creaky carnival rides and eat food out of paper bowls.

Considering the adorable little town where I grew up is a mere 9 miles from my current home and hosts a large carnival called Viva Vienna! every year over the 3-day Memorial Day Weekend, I didn’t view this as a particularly lofty ambition.

Life, so it seems, is not so simple.

There’s Something About Vienna

First, let’s talk about Viva Vienna! because it’s not like other Carnivals. It’s different, which is obvious just by it’s name. It’s not just called The Vienna Carnival or The Vienna Festival. Vienna couldn’t possibly be so mundane. No, it’s called Viva Vienna! (exclamation point part of official name)

Vienna is the Stars Hollow of Northern Virginia. It has that small town feel with independently owned businesses, antique shops and local grocers selling locally grown food. Most importantly, of course, it has a cute little library with giant book sculpture right in front. 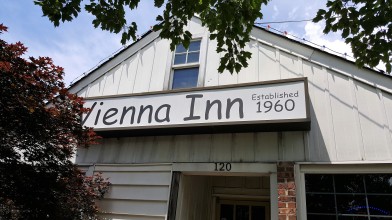 Sentiments used to describe Vienna – charming, quaint, quirky. It’s also is not yet inundated with man buns and microbreweries. In fact, the most beloved restaurant is the Vienna Inn, which is known for its chili dogs. (It’s probably the equivalent of Luke’s.)

Like Stars Hollow, Vienna loves it’s town events. It hosts a 4th of July Celebration, Oktoberfest,  holiday strolls and a highly entertaining Halloween parade that has people marking their spots along the route with chairs and tarps as early as 5 am the day of the parade.

But the biggest, loudest, most action-packed event is Viva Vienna! It’s more than just a Carnival. The twirling, whirling, music-pumping carnival rides and fried Oreo selling food vendors are set in the middle of a historic area, where people can climb onto a red caboose and drop into the world of a train conductor or take a break and tuck inside the Freeman store, which was built in the 1800s. It’s now part old-timey candy store, part Vienna-centric tchotchke store and part bookstores (that’s my favorite part).

Live music plays behind the building that was once Vienna’s original library on a small stage in front of a verdant field. The very large church with its very large church bell that rings at random times not coinciding with anything obvious sits right at the carnival’s edge. On Memorial Day Weekend in Northern Virginia, Viva Vienna! is the place to be and I was determined to get there, as I’ve done nearly every year I lived in Virginia.

We had a plan. I’m good at plans. I like plans. I don’t like it when plans don’t go my way.

I’d checked the weather. It said overcast with intermittent rain in the morning. Therefore, I planned that in the morning we’d finally buy a new car. Then, we’d pick up our daughter, Ella, up from dance class and head over to Viva Vienna! Saturday is the best day to go to Viva Vienna! in my opinion. And by later in the afternoon the crowd thins out.

After we purchased our new, fully electric, plug-in, no gas car, we felt not just eco-friendly but like the eco’s best darn friend ever. Smiles stretched across our faces as we purred down the road, ready to take our car on its first outing – to a carnival!

Then a few drops hit the windshield. Then a few more. My husband and I looked at each other. The weather forecast had said intermittent showers. The clouds above said near-permanent rain for the foreseeable future. We decided to reassess my plan. We didn’t go to Viva Vienna!

Sunday lived up to it’s word, at first. Then, it turned on us like a jilted best friend. 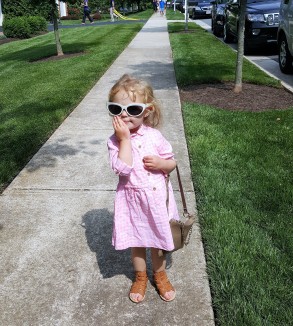 We woke up that day to bright sun streaming through the windows. I didn’t want to miss the “golden” opportunity so I rushed everyone out the door. We piled into the car, me, Ella, our friend Karin and her 2-year-old daughter, Maisy, and off we went.

Only a few clouds hovered along the edge of the horizon. The weather forecast said chance of showers after 2 pm. We had hours before then. We ambled along the sidewalk toward the carnival. A hill dropped down in front of us revealing tented booths lined along the sloping street. The church bell rang loudly and so many times we lost count. We’d made it. We were at Viva Vienna!

We bought tickets and rushed over to our first ride – the teacups. To say I’m not a fan of the teacup ride is perhaps an understatement. For some reason, at some point in my life, I became two things: 1) Terrified of heights and 2) unable to handle rides that spin. I’d come to realize this a few years ago. However, I’d failed to realize that there are two kinds of rides at carnivals: rides that go high and rides that spin. Some do both.

It didn’t matter. It was Viva Vienna! The carnival of my childhood where I’d nearly cracked a tooth on a candy apple and ridden on the Ferris wheel with my first boyfriend. This was a place to make memories and I was determined to make them, nausea or no nausea. I gritted my teeth, closed my eyes and spun.

For our second ride, we chose something that didn’t spin per se, it just rolled along in a wide circle that waved up and down, a super shrunken roller coaster. Apparently, we weren’t the only ones looking for a reprieve from the spin, because the line for the Dragon Wagon stretched long and moved slower than a sloth waiting in line at the DMV.

Ella and I stared at the facade of the Dragon Wagon and mused that the dragon was much less terrifying than the eerie jesters or strange gnome-like King head. I decided the creators of this ride had seen The Dark Crystal one too many times.

When we got into the seats that lined the dragon’s spine, I realized the gnome-like King might was obviously appropriate because only gnomes could fit in this ride. I’m a pretty small person. There are kids in Ella’s 6th grade class who are taller than me. Several of them were taller than me well before 6th grade. Still, I had to contort my body into an unnatural and uncomfortable position to fit into the gnome contraption.

The operator seemed disinterested in safety or comfort. As soon as everyone sat down, he threw the lever and our heads jerked back as we swung around the track. Maisy loved it. She smiled with glee at every bump and turn.

Ella smiled with whatever kind of smile pre-teens have, which is to say a smile that says “I may be having fun but I’m not going to admit it” or “this is awful and I’m just trying to placate you all.”

The ride went on for what felt like an eternity, especially crunched into a tiny gnome-made seat. Still, I preferred the dragon to the teacups and eventually I felt a smile burst through the discomfort.

Raindrops Keep Falling on My Head

After just two rides x 4 people, our tickets had already dwindled. So we got more tickets and some lunch. My husband arrived as we wiped the crumbs from our mouths and tossed our paper plates in the recycling. He arrived just in time to tell me he felt a raindrop. Ella informed me she felt one too. The weather forecast said no rain until 2 pm. Therefore, I convinced myself it was just a few drops. It wasn’t time for a real rain.

Drops trickled down onto my head and my face, not enough to prevent using all those tickets we just bought. Determined to wait it out, we huddled under a line of trees. Here’s the thing though, trees are not great cover in the rain. A sprinkle, a light mist that lasts a few minutes, maybe. But leaves cannot keep out a torrential downpour. And down it poured.

As rain matted our hair and dripped down our faces, we ran for cover in a mattress tent and poured over our weather apps to try to determine when the rain might end. We waited and waited and waited. During a beak in the rain we decided it was time to sprint for the car. We made it halfway when the rain came down again harder and faster. We ducked into another tent and other people squashed in with us.

After only two rides, drenched, cold and pockets full of soggy tickets, we made it back to the car.

Again, we woke to sun and a forecast that assured us overcast clouds but no rain. I was skeptical. So far, my faith in weather forecasting was at an all-time low. Still, the tickets had dried from the day before.

Ticket to Not Ride

Although it didn’t rain, it wasn’t overcast either. It was sunny and it was hot. In fact, on the black asphalt and crunched between a mass of people, sweltering might be the best word to explain it.

The day before, Ella never got to go on any of what I’ll call “big girl” rides, only gnome-sized rides. So that was first on the agenda. We trekked down, through the thick crowd to one of the rides that spins and goes high in the sky.

We looked for the end of the line and looked and looked and looked. We found it about a hundred people later. It took about five seconds to decide that none of us would stand in that line. So, we went to another ride. It’s line stretched down and around rides and hot dog stands like a never-ending dragon tail also.

Red-faced from heat, hair curling from humidity, throats dry and shoulders burning in the sun, we trudged back across the center of the carnival.

My husband returned to that same area under the trees where just a day before we’d tried to seek shelter from the rain, this time hoping the the trees would shade him from the giant ball of fire in the sky. My mother, who’d also joined us, fanned herself in the shade by the funnel cakes truck.

Ella and I went to inform Karin we were done. It wasn’t meant to be this year. However, we decided to get on one more ride – the Dizzy Dragon. For some reason it seemed a fitting ride for our final carnival failure.

After waiting, again, in a line that would make Disney World proud, we hopped up inside the dragon. It’s body shaded us from the sun, which was a relief. As it tilted and whirled a small breeze blew in. Together, we turned the giant wheel in the middle and we swung back and forth. This ride was more of a gentle rocking than the nauseating spin of the teacups. We all smiled and giggled. Maisy leaned back, swaying with the movement, looking content. Karin wrapped her arm around her and hugged her close. Ella smiled what looked like a genuine, “I’m enjoying this” smile full of teeth.

This was what it was about, this moment inside the belly of a dragon, even if it was just one moment. This was the one I’d add to my memories of candy apples and first boyfriends. This quiet, lovely moment with my daughter and my friends.

Until next year Viva Vienna!