Independence Day Parade Brings Out My Competitive Side 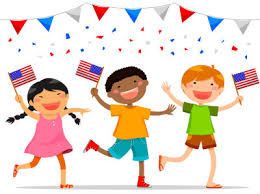 When you’re a writer, many times you have to open yourself up and lay it all out on a page for what you write to mean anything. Tapping into your characters can mean tapping into your own emotions, motivations and flaws. Essentially, you have to face some hard facts about yourself.

For me, one of those facts I’ve had to face is my need to win. If you ask a person who doesn’t know me very well, they might be surprised to learn this. By sheer will, I’m not a particularly competitive person anymore. But once upon a time, I liked to win. No, I had to win. I had to be the best. I had to have things my way. If I that didn’t happen, it made me angry and I didn’t want to do it anymore.

Luckily, after many years and life lessons, I learned needing to win all the time is a pretty big character flaw steeped in insecurities. And it’s also hard to win all the time when you’re not always the smartest person in the room and definitely not the most athletic.

So, I chose to change.

I am now fine losing an argument or a card game or my pride when I throw a toy for the dog and it hits the ceiling and whole family laughs at me. I’ve learned to take humor in these experiences and laugh at myself, most of the time. I can’t always win or be great at everything nor should I. Compromise, being wrong, losing, these are good things. You learn and grow from these things.

And yet, I haven’t completely tamped down that part of me. It still wriggles out now and then, like when I was preparing for 4th of July.

Preparing for 4th of July brings it all back. 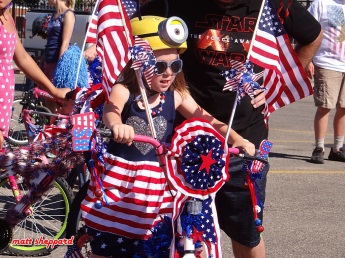 To understand the situation, you need to understand my neighborhood. It’s like Stars Hollow without the town part. But it has the quirky characters, close knit community and the events. We love our events.

Halloween, for example, can reach epic heights of scare, including moving creatures and creepy projections. During the holiday season our neighborhood hosts carriage rides with hot chocolate. In the summer, the pool is the town square. People gather and there are activities and parties, none bigger in the summer than 4th of July, which starts with a parade. Yes, my neighborhood has its own parade, complete with fire trucks.

Kids get dressed up in the their most outrageous patriotic outfits. They trick out bikes and scooters. Then march down the equivalent of our Main Street, while people from the neighborhood come out of their houses and wave from the sidewalk. It ends at the pool where donuts and other desserts re-named as breakfast items are served. And, there’s a contest, a costume contest.

This is where my flawed personality bubbles to the surface.

My daughter has never wanted to participate in the parade. We’ve watched and waved, but never walked. She never wanted to dress up. I’ve never forced her, even though I love crazy kid costumes and getting creative. And, there’s also that little part of me that still wants to win things like – costume contests! (I mean wants my daughter to win costume contents.) Since my daughter was never interested, that overly competitive side of me remained tightly bound up.

But this year we have a 2-year-old staying with us. A two year old named Maisy with adorable curls and big blues eyes who has no problem with dress up. Then my daughter suddenly decided this year she wants to dress up and march with Maisy in the parade. The little competitive ball inside me unraveled faster than you can say 4th of July and I started concocting crazy costumes in my head.

I had lofty ambitions! Maybe lofty is the wrong word. I had completely, unrealistic, logic-bereft ambitions… 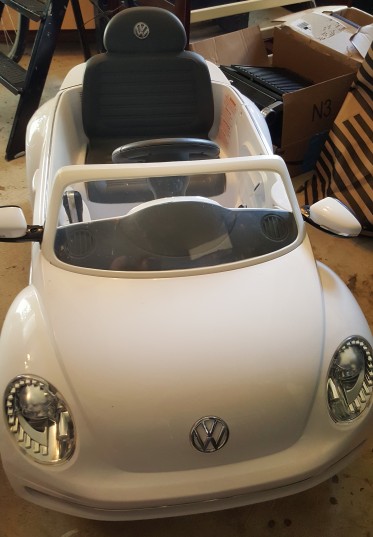 Maisy has this great white, VW convertible toy car. It’s adorable and the perfect canvas for blue and white stripes, American flags and a cute little girl sitting inside waving to a crowd of onlookers.

The only problem, Maisy doesn’t quite have the height or coordination to drive it yet. So, after conferring with my daughter, Ella, we came up with a great plan. We’d just attach it with a rope to Ella’s bike and Ella could pull Maisy through the parade.

Turns out, like most things in life, it wasn’t so simple.

The car has to have the pedal pressed down to run. (Seriously, what kind of toy is this? Since when are things so safe.) So it can’t just be pulled, at least not easily, which meant Ella would probably spin her tires out trying to pull it and/or fall over after only getting a few feet.

Ella suggested we just put a brick down on the gas pedal. And, since I had already decorated the VW in my mind and imagined Maisy waving like a princess from the seat, I actually considered this idea. I knew where to get a brick.

As I got out the car and the bike out of the garage while my husband stood there, shaking his head, repeating the words, “This is a really bad idea,” I soon realized this too would not work, at least not if I wanted both Ella and Maisy to come out of the parade unscathed.

With the VW convertible idea a bust, I had to come up with something else. A wagon seemed like the next logical choice. Unfortunately, we don’t have a wagon. I know, what self-respecting suburban family with a kid doesn’t have a wagon? Well, we don’t.

So I dragged Ella with me to Target with the goal of getting a wagon that Ella could pull Maisy in through the parade. Sure, it’s not as princess-like as a VW convertible. But we could still trick it out and make it awesome.

The only problem here? Ella didn’t particularly want to spend a very hot summer morning pulling Maisy in a wagon through a parade. I figured forced child labor probably wasn’t a good way to spend 4th of July either. 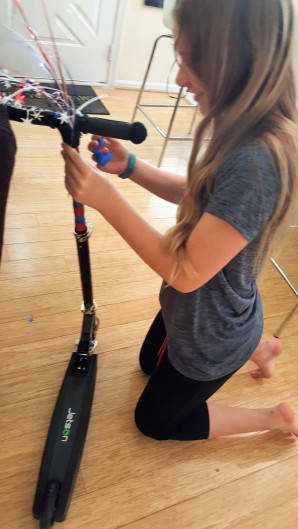 Ella and I wandered around Target, thinking up new ideas for vehicles because we couldn’t be so pedestrian as to walk in a parade. (Pun intended). We’d never win any contests doing that and we had to win this contents. I wanted that ribbon or piece of paper. Honestly, I don’t know what the kids who win actually get, but I wanted it.

Then we saw it. The Jetson scooter. It was sleek and metal with red and blue lights trimming the side and wheels that light up when you ride it. A scooter, it would be perfect. We decided to buy one for Ella and a smaller one for Maisy.

The scooter idea sticks, but it’s not without it’s problems.

When we got home, Ella and I couldn’t figure out how to get the scooter unlocked, so I sort of broke it. Apparently things that seem pretty permanent, like bolts that attached to very large screws, should not be removed from scooters.

But I would not be deterred. This scooter idea would work. I wasn’t giving up. 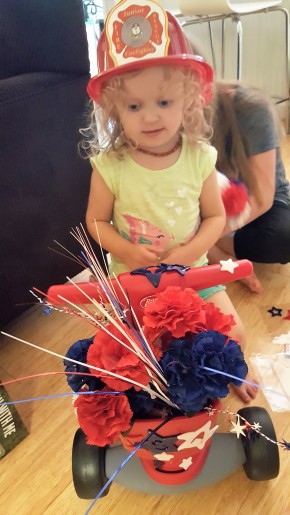 I enlisted the help of my husband, who managed to fix what I’d broken and he put together Maisy’s scooter with only a few huffs of annoyance at the poor directions.

We were finally ready to ride!

One small problem, Maisy doesn’t scoot. She’s never had a scooter. How could we have the two girls scoot through the parade together if one of them didn’t know how? We’d just have to teach her, right? Well, have you ever tried to teach a 2-year-old to do anything new that’s even slightly complicated? Guess what, they don’t learn in 5 minutes. Luckily I’d thought to buy a modifiable scooter. It could be converted to have a seat! That Maisy had no problem riding.

Massive amounts of red, white and blue flowers, stickers and garland later, we had our parade vehicles tricked out. I think they are completely costume-competition-winning worthy, especially once paired with the red, white and blue outfits we have picked out. Add a few American flags and we are perfect.

“They see me rollin'”

As the tune of Ridin’ spilled out of the speakers of my phone, Ella and Maisy rode down the hill outside our house, practicing their waves and getting used to their scooters. It’s about more than just the costumes and the vehicles. They have to have style.

They rolled along, waving, turning. We still have to work on the simultaneous blowing kisses and steering for Maisy. But we have two days to get there. It will happen.

As I watched circle the cul-de-sac, I decided we have this in the bag. I swear if they don’t win someone is going to be in trouble. No, no, that’s the old me talking. If they don’t win, I’ll accept it with grace and aplomb. Hopefully.

One thought on “Independence Day Parade Brings Out My Competitive Side”