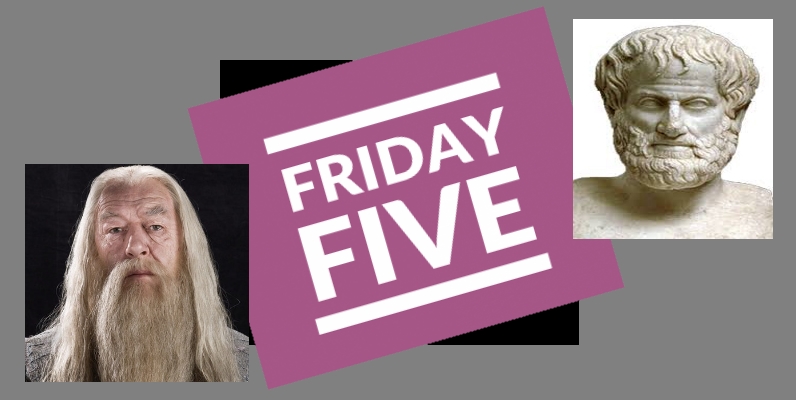 After hours of scouring the interwebs this week, I’ve finally done it. I’ve found my 5 favorite bookish stories, including a real Agatha Christie mystery, a comparison of Plato and Dumbledore and Up lit. Not sure what that last one is? Read on…

Friday 5 for the Week of July 29th

This is my favorite recurring blog where I look for the great book stories of the week and summarize my 5 favorite on my blog. I know, it’s such a chore reading through all these articles about books and writing and reading just for this blog. But I persevere in the hopes of saving other dear readers some time. (Sarcasm implied. I do this anyway. Deciding on five and summarizing them is just bonus fun!)

So, here you are, Friday 5 – My five favorite bookish stories from this week!

5. Was Agatha Christie’s Mysterious Amnesia Real or Revenge on Her Cheating Spouse?

Agatha Christie once disappeared for 11 days. After a fight with her husband who’d fallen in love with another woman, Christie drove off and her car was later found abandoned. A search for her commenced, even famous writers Sir Arthur Conan Doyle and Dorothy Sayers pitched in looking for her. So what happened to Christie? She was found 11 days later at a spa, registered under the name of her husband’s lover with a case of amnesia or so it seemed.

“She has suffered from the most complete loss of memory, and I do not think she knows who she is.”

However, the question still remains, was it a mental break with reality leading to amnesia or a case of crafty revenge? Read the article and you decide….

4. Quiz: Who said it, Plato or Dumbledore?

So this is less article and more quiz, but maybe you’ll allow me a little leeway here because this is awesome. It essentially compares Plato to Dumbledore, which is very high praise and I’d argue a very interesting comparison. Can you differentiate them? I got 12 out of 15 right. I’m sure someone who is very familiar with the Harry Potter books will probably ace this. But I’m guessing that’s not the point. If you read the quotes, they are quite similar in nature, Dumbledore or Plato could easily have said any of them.

3. Children’s Books Missed These Immigrant Stories. So Students Wrote Them.

This is a touching article about a community college literature class filled with students of immigrant families. The professor encouraged each student to write their own children’s story. The results are inventive, clever and poignant. One student broke down stereotypes with a tale about a Pakistani child who wanted to win a race. Another story is about two Ghanaian boys — one rich, the other a servant — whose friendship is shattered when the rich boy betrays his friend. In another story, a parrot, who lives on a Dominican beach, flies north when a drought hits the island. He lands in New York, where, he finds himself in the cold, competing against pigeons for scraps of garbage.

These sound like wonderful stories! I hope they make it into print! #weneeddiversebooks

“…a children’s literature class she took at night, when her fellow students came straight from work, still dressed in the uniforms of nurses, fast-food workers or security guards.”

2. Women of Color Who Should Be Added to the Literary Canon

First, if you don’t understand the concept of “canon,” don’t fret. I studied communications and English in college and still really don’t get it unless it’s applied to Star Trek or Game of Thrones. The idea of general literary canon confuses me. This articles helps it explain it.

“Usually known as the Western Canon—although this designation is proving more and more limiting—it’s a collection of books, plays, poems, and other literary works that scholars generally agree are all worthy of study, appreciation, and preservation.”

The article also makes an excellent point, the vast majority of the literary canon consists of men, specifically white men (think Shakespeare, Hemingway, etc). Ah, it’s just like our government, the one that’s supposed to, you know, represent the people. How times (don’t) change…

I wholeheartedly agree that our literary canon should reflect the entire literary world and not just the white men. Therefore, like our government, it is in dire need of some serious infusion of women and minorities. This articles makes a case for some great books to help rectify that situation. Hopefully we all take heed.

1. Up lit: the new book trend with kindness at its core

It’s well known that when economic times are tough, people flock to the movies. People want an escape. Well, when social and economic times are rough, it’s good to know that people don’t just fall into a hole of negativity or mindlessly sit in theaters. Instead, apparently we go in the opposite direction, which reflects the new book trend of up lit. What’s up lit?

“…more and more bookbuyers are seeking out novels and nonfiction that is optimistic rather than feelgood. And an appetite for everyday heroism, human connection and love – rather than romance – is expected to be keeping booksellers and publishers uplifted, too.”

Up lit also tends to have a focus on empathy and good-natured stories. An example is one of the recent Man Booker prize frontrunners George Saunders, novel Lincoln in the Bardo. The book is described as, “formally daring, generous in spirit, deeply concerned with matters of the heart, it is a testament to fiction’s ability to speak honestly and powerfully to the things that really matter to us.”

Sounds “up” to me. I think I need to read more up lit.

And with that, happy reading and happy Friday!