Traveling with the Travelers: Judging a New England Town by Its Bookstore

I have two philosophies when it comes to travel. One: Choose one location and delve into all the nuances and quirks of that one place. Two: Visit as many different places in a general location that will reasonably fit into the length of the vacation. Since I recently visited coastal towns of Maine, I’ll put it in fishing terms. It’s a deep dive vs. casting a wide net.

Although not always, our family tends to prefer the wide net approach, especially on a first visit. Therefore, when it came to our trip to New England, we decided to take the “sampler” approach.

My main yardstick for coastal towns is the mid-Atlantic/southern coast of the US, where there is no shortage of long, sandy beaches lined with mini golf, fried fish restaurants, beach apparel stores, piers and the occasional boardwalk. Most of the beach towns, big or small, along that coast also seem stuck in another decade, usually the late 70s and early 80s.

When I returned to Rehoboth Beach, DE for the first time in over 20 years, I was shocked to see the same hotels and restaurants. Not even the cackling ghosts on the haunted house ride at the boardwalk amusement park had changed.

This might be why I expected the same type of consistency when visiting New England. I pictured rocky shores lined with lobster restaurants and tourist shops in gabled buildings. While I wasn’t completely wrong, I was surprised by how different each town felt. Not only that, unlike many of the small beach towns I know, every New England coastal town we visited had at least one bookshop, sometimes up to four. (You rock Camden.) Each town, despite their similarities, was more different than the same, expressing a personality unique to the inlet area.

Therefore, in part 3 of the summer edition of Traveling with the Travelers (named for my debut novel The Travelers), let’s talk about how a town can be judged by its bookstore. 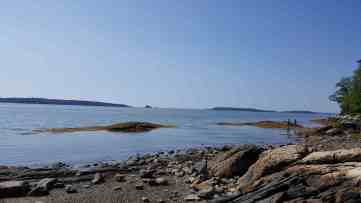 Although I’ve already written about Freeport in a previous post, it’s worth revisiting. To sum it up, this was a coastal town of high-end retail stores, where LL Bean’s flagship store cast a shadow over the aptly named Main Street, basically the only street. The town also wasn’t at the port, but rather inland. However, a short drive to the water or “port” portion brought us to retail-free nature trails through pine and birch forests. Small beaches and rocky cliffs wove along the coast. Standing on their edges, the ocean spread out on a long, blue horizon that bubbled with islands.

In Freeport, there were very few lobster restaurants save for an adorable shack on the tip of a peninsula. We also couldn’t throw a rock without hitting a B&B. It definitely didn’t fit into my stereotype. 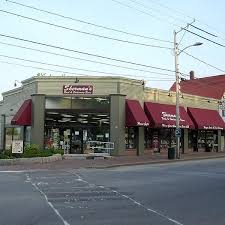 The town’s main bookshop (there were a few other used bookstores) was Sherman’s Maine Coast Book Shop Freeport. And if you want to understand Freeport’s dichotomy of retail and nature, its bookstore was a perfect microcosm. Firstly, Sherman’s was no Barnes and Noble, but it’s a chain bookstore. However, inside there was more than just books. In the large, square space with high ceilings, bookshelves with tomes about Maine and nature buttressed up against coastal merchandise. If a lobster could be printed, stamped, molded or pressed onto something, it was sold in this bookstore. In a way, similar to the town, the heart of the store, books, felt overshadowed by the plethora of other retail options.

In Bar Harbor, we hauled our suitcases into a Holiday Inn “Resort.” Feel free to guess why resort is in quotes. Coming from a beautiful historic hotel in Salem, Massachusetts followed by a perfect little B&B in Freeport, this felt like staying at Walmart, generic and un-special.

After driving up the coast where flower box decorated inns popped up on all sides, I realized I’d chosen poorly. On the positive side, because I always look on the positive side, our hotel was very centrally located to Acadia National Park and Bar Harbor proper. In one day we went from a clear blue shore of Jordan Pond to the top of Cadillac Mountain, then down to a pine encircled sandy beach and ended on the creaky dock planks of Bar Harbor. 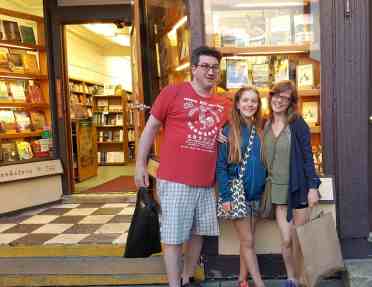 While Acadia National Park added a stunning back drop, Bar Harbor felt like a beach town complete with tchotchkes, beach apparel and ice cream purveyors in quadruplicate. Add in lobster restaurants every few steps and whale watching tours, this was the town I expected to see at every stop in Maine.

The town’s main bookstore, like Freeport, was Sherman’s. However, with its sepia lighting, cluttered shelves and narrow aisles, this Sherman’s felt more like an independent, local bookstore than its sister store in Freeport. Unlike Barnes and Noble, the Sherman’s bookstore chain appears to absorb the essence of the town. In this case, foggy, beachy, local charm bottled inside book-lined hazy windows. 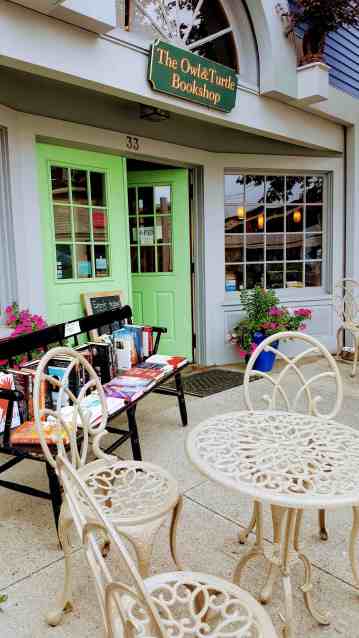 Known as the Jewel of the Coast, our first glimpse of Camden started with the large Victorian mansions, enshrouded in verdant plants and colorful flowers running up walkways and along front porches.

Like Bar Harbor, Camden tilted into the water. People walked along the streets, dripping down to calm, bay waters where boat masts stuck up in the air, like toothpicks on the water. Custom signs hung above each store. Antique stores didn’t sell antiques, they sold vintage, rejuvenated furniture with price tags that made me afraid to touch anything. Yachts drifted next to sailboats and American and Maine flags flapped in the wind above an Opera House.

Although the town had four bookstores, the Owl and Turtle best reflected the upscale, Hamptons-esque atmosphere. Outside a bench served as a bookshelf and French cafe style seating awaited customers. Inside, the smell of new books mixed with the scent of fresh coffee. A young barista brewed lattes and cappuccinos while customers flipped through the books. In the spacious store, books were decor, displayed like fine crystal to celebrate beauty as much as function, similar to the town itself. 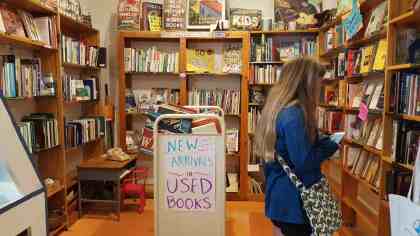 Although Rockland was only two towns down from Camden, I expected it to just be an extension of Camden. And, like Camden, we found a port full of sailboats with a town running along the water. However, where Camden had an Opera House, Rockland had The Strand, a small movie theater with a giant art deco sign.

In Rockland, old buildings with peeling paint gave the town a lived-in character. If Camden was like walking into a meticulously maintained mansion, Rockland was like walking into an eclectic, comfy home. An art museum took over four or five old buildings. And it had a small bookstore called Hello Hello Books, hidden behind a trendy cafe. With handwritten signs and second-hand furniture, the bookstore buzzed with the hippy, artsy vibe of the town. The store used an old library cart as a bookshelf and it featured books I’ve never heard of before, which made me love this store even more. It was quirky and weird, two of my favorite characteristics in people, towns and bookstores.

It’s nice to know that if you really want to understand the essence of a town, just visit its bookstore. And if a town doesn’t have a bookstore? Run, fast, in the other direction and find a town that does.