Best Way for a Book Nerd to Say Goodbye to Summer? A Day at the National Book Festival

It started in early fall 2001, on September 8, just before the numbers 9-11 would become burned into US history. But on that sunny Saturday, tragedy had not yet struck and the bookish excitement of the very first National Book Festival swallowed up the Library of Congress and stretched out onto the National Mall.

“We must all try, in every way we can, to send the message that reading is critical to our lives and to the life of our nation.” – James H. Billington, former head of the Library of Congress

Organized and championed by then First Lady, Laura Bush, this first festival attracted 60 famous authors, 25,000 to 30,000 attendees and even some NBA players. Since then, it has only grown. Now nestled in the expansive and sometimes overwhelming Washington Convention Center, the festival boasts attendance upwards of 200,000 book lovers, writers and readers. 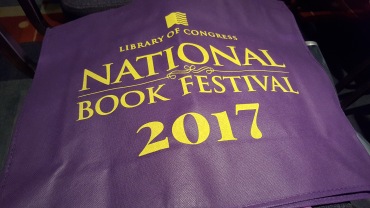 Since I didn’t live in DC at the time of the festivals inception, but instead in Manhattan, the festival wasn’t on my book radar. I’d also recently graduated from college and worried about my career and exploring the new city where I’d just moved.

Still, I returned to the DC area about 8 years ago but never went to the festival. My pathetic excuse was that it’s always held on Labor day, for me, typically a weekend consumed by getting my daughter ready for school. But this year, my daughter’s school started a week earlier in August. That meant, for the first time in a long time, we had a Labor Day weekend that we could fill with something other than staplers and notebooks.

And so off we trekked to the festival!

As we snaked through the crowds, up and down stairwells, teaming with eager readers, all I could think was that the National Convention Center could house a tiny city. With 4 enormous levels, it practically felt empty even though hundreds of thousands of people swarmed through its corridors. The one time I really felt the enormity of the crowd was when we decided to stand in line for an author signing. One look at a line that would rival Disney World and we turned around.

Even without standing in line for hours to have someone scribble in a book and embarrass yourself by gushing, there was plenty to do.

For our first event, we went to the children’s stage where my daughter and I sunk into bean bag chairs and the rest of our party gathered on a set of couches and chairs. It felt like a living room. Kids jumped and played enjoying the casual atmosphere.

Then we watched an awkward author and illustrator duo attempt to engage children. They had a slide show and some attempts at witty banter that fell flat. It felt a little like a skit put on by middle schoolers who were only amusing to themselves. But, the audience of mostly children and their parents didn’t care. In fact, it made it a bit more endearing.

That’s the thing about most authors, they aren’t polished. Many have no desire to be up on stage talking about themselves or their books. They’d rather be at home writing or drawing.

The writing, illustrating duo read their book, accompanied by slides. It was a little young for my 12-year-old, but the 2-year-old with us loved it. The best part, the presenters asked “Who’s read our book?” knowing full well no one had as it’s not even out yet in stores. But the little 2-year-old with us, Maisy, shouted out “I have!” just to be supportive, drawing her lots of giggles. (She may not even be in pre-school yet, but Maisy steals the show at a 9th grade level.) 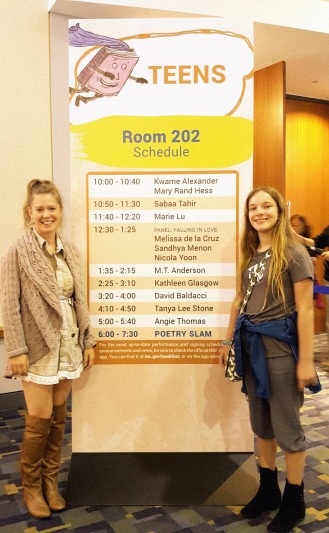 After children’s literature, we moved up a genre to young adult and went to see Sabaa Tahir, who wrote the An Ember of Ashes series. I have not read the books, but I have definitely heard of them and her. To be honest, we went because it seemed like the best fit in our schedule for that day and I wanted to give my daughter something a little more stimulating since she’s been a young adult since birth.

Sabaa Tahir’s presentation, also complete with slides, left us laughing and contemplating life. She talked about her failures, starting with haircuts and continuing through newspaper internships and even her current writing process. Accented by clips from comic strips and equally funny tales of accidentally hanging up on reporters calling on satellite phones from the Middle East, Sabaa Tahir told of how failure shaped her and made her a success.

As a writer, her descriptions of how she doubted herself, her struggles with her first drafts and how she fell into a “dark night of the creative soul” after receiving some pretty harsh feedback on her book, felt like my own. I’ve been there. All writers have, I think, at least most of us. 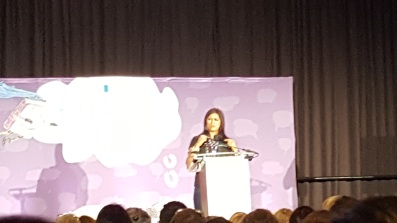 “A dark night of the creative soul.”

But even for people who don’t write and just like to read, the stories of her life and writing failures and how she used them to better herself are an important lesson. If you ever have a chance to hear Sabaa Tahir speak, do it. We also immediately went out and bought her book. There’s no possible way someone who can convey that degree of charm, wit and intelligence in one half hour talk didn’t write a fantastic novel.

Adults in the Room

For our final talk of the day we went to hear Diana Gabaldon, the writer of the very popular Outlander book series and now also very popular TV show. I’ve read the first Outlander book, and I loved it. And I watch the TV show, as does my husband, as much as he hates to admit it.

Given the popularity of her books, I expected a large crowd. Large was not the right adjective. Entering the enormous ballroom nearly 10 minutes before the talk, we still ended up in the very back, rows and rows of rounded heads between us and the stage. Luckily the National Book Festival knows how to use a jumbo screen and Diana Gabaldon is not one for slides, therefore, her smiling face projected out to us like a moon in a dark sky as she talked to the audience as if we’re all sitting in a living room with her.

After just a few minutes into her presentation, I realized Diana Gabaldon is not your average writer. For most of her life she was a scientist, evident not just by her telling us so but by the ease with which she can talk about cracking open a bird skull. She’s clearly extremely intelligent and has led a very interesting life. However, while her literary success didn’t happen overnight, her story didn’t have the same “struggling artist” pain that I think most writers experience. Perhaps this is because Diana Gabaldon seems like someone who would see an obstacle and trample right over it, never even considering that she couldn’t best it. 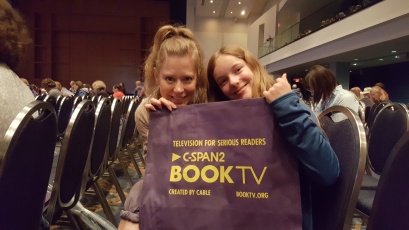 She’s really one of the lucky ones. She hadn’t even written a full first draft and got a book deal just based on excerpts. That’s a testament to her talent as a writer and storyteller. But, if I’m honest, her publishing story also felt like a knife chipping away at my soul. I’m a published author, but I’m human too and not immune to jealousy. I work every day to promote my book. It took many letters and rejection after rejection before I got a publisher to take notice of my first novel. And I support all authors and want everyone to find success. But, hearing her story was sort of like when you spend hours working on a puzzle and finally get it and then someone else comes in and solves the same puzzle in two seconds. It can feel a little deflating.

Still, always a bright side kind of person, I do think that Diana Gabaldon’s story has one very special, inspiring point to it. She didn’t even start writing fiction until the age of 35. So, for anyone out there who feels like it’s too late to try, she’s a shining example of how it’s never to late to go after your dream. 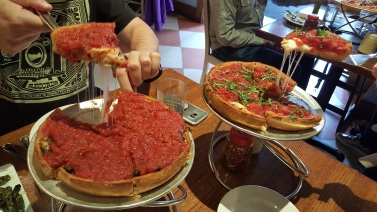 While I wanted to spend the rest of the day at the festival, books are not enough sustenance for my family. They wanted real food. And since we’re not fast food people, we wandered out into the rainy day to District of Pi, where we consumed what my New Yorker husband says with full air quotes “pizza” (aka, Chicago-style pizza, which to him is a pie filled with cheese and tomatoes and not a real pizza.) Don’t get me wrong, he’ll still eat it. He just refuses to call it a real pizza.

Thanks to a non-pizza eating coma, and afternoon scooting up against evening, I couldn’t drag my family back to the festival. I had a dog at home who needed tending to and a family that looked wet and weary. Still, I couldn’t complain, a day filled with books, family, friends and “pizza,” that’s kind of a great day.

So, I waved goodbye to the festival from across the street, promising to come back next year with a picnic basket and a dog sitter at home.

2 thoughts on “Best Way for a Book Nerd to Say Goodbye to Summer? A Day at the National Book Festival”