If someone called me a “feminist” or a “bleeding heart liberal” or even a “libtard” my first response would be, “Why, thank you!” I might even curtsy. And then I’d add, “And nice to see you matured past the name-calling of 7th grade.” (I wouldn’t be able to help myself. I mean really, “libtard,” come on.)

The point of my theoretical conversation is that even if words like “feminist” are spoken by venomous tongues, we don’t have to let someone else’s definition influence our own. To me, these words are compliments and slinging “feminist” like a curse word says more about that person’s issues than mine. (Read: They clearly have issues, I’m just doing my thing.)

Let’s do a little exercise. Think of someone saying the words, “Ugh, you’re a ‘feminist.'” And imagine the last word said in a long drawn-out groan, or accompanied by a scrunched nose of disgust, or spit out through a scowl. Now replace that word with its real meaning. “Ugh, you’re a ‘person who believes in the equality between the sexes.'” (Not my definition, thanks Merriam-Webster.) Now, imagine that new sentence said with the same angry tones and faces of the first. In your head it seems pretty terrible, right? (If it doesn’t, seek counseling.)

Re-Writing the Book on Feminists

Despite the fact that I always view the word “feminist” as something positive, not everyone else feels that way. There are still many people (OK, more than many) who feel at minimum it has a negative connotation and at maximum it means some crazed she-beast who wants to chop the heads or other things off men, metaphorically of course. (Dear people who think this, I am a feminist and assure you I can barely chop an onion. You’re all safe.)

When I picked up Chimamanda Ngozi Adichie’s We Should All Be Feminists, I knew I would like it. I’m the target audience. I’ve got my pink pussy cat hat proudly propped up on the piano in our living room.  I went to the Women’s March. (See blog on that here.)  I also fell in love with Adichie’s novel Americanah, a book that I can say truly changed how I view life. (I know it sounds cliché, but it’s true.) However, I didn’t expect her small drink coaster-sized book of only 64 pages, We Should All Be Feminists, to pack such a substantial punch.

Based on a TED talk given by Adichie, the book strikes hard at the dark cloud hovering over the concept of feminism. It’s also a reminder of how far we’ve come and how far there still is to go.

In one part, Adichie tells a story of how a car parking “attendant” (you’ll need to read the book to find out why that’s in quotes) in Nigeria thanked the man Adichie was with for the tip she gave him. Even though she took the money out of her purse. The attendant applied certain assumptions about her relationship with the man, one being the money ultimately came from him, which it didn’t.

Seems too extreme by US standards? Consider this. That situation isn’t all that different from a woman going to a car dealership with her husband or dad or just a male friend and having the salesman speak directly to and only to the man, even if the woman is the one buying the car. It happens, trust me.

What I also found compelling about this tiny tome, was that it said so much more than it actually said. When looking at the issues raised from a broader view, the female struggles for equality share similarities to other oppressed minorities. And while women can’t claim minority status, since we actually make up the majority of the world’s population with 52%, we certainly don’t hold 52% of the positions of power. In addition, we’re subject to double standards and have to fight our way up to positions of power that are easily turned over to men.

Think about it, really think about it. There has never been a female president of the United States. Isn’t the US supposed to be the paragon of freedom of thought and speech and progress? Plenty of other nations have had female leaders. (Looking at you Germany.)

“Culture does not make people. People make culture. If it is true that the full humanity of women is not our culture, then we can and must make it our culture.”

Women are not a minority, we’re a majority, but we still don’t hold the power. This is the key point that resonated with me in We Should All Be Feminists, the concept of who holds the power. I think for people to progress and understand society and each other, this is a concept that needs to be explored and discussed more. 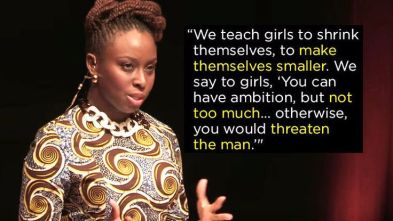 Misunderstanding the importance of “who holds the power” is one of the many reasons people don’t understand feminism or other movements, such as Black Lives Matter. People who counter with “All Lives Matter” do little more than demonstrate their ignorance of racial injustices and the imbalance of power.

“About 52% of the world’s population is female. But most of the positions of power and prestige are occupied by men. The late Kenyan Nobel Peace Laureate Wangari Maathai put it simply and well when she said ‘The higher you go, the fewer women there are.'”

The Bravery of Feminism and Speaking Out

As I said earlier, I’m a fan of Adichie’s literature. It’s some of the best I’ve ever read. She breaks open the messy issues of sex/gender and race via complex and strong female characters. Reading We Should All Be Feminists gave me a different perspective of the person and not just the writer.

It’s one thing to expose the truth and dig at established hierarchy and mores through fiction. It’s another to flatly state it to an entire TED talk audience and then put that talk in a book. Adichie is unapologetic for how she feels and how she thinks the world needs to change. The veracity of her words is rooted in confidence in herself and her ideas. You can sense, she doesn’t fear the ideas of those who might disagree with her, she doesn’t need to. (The word hero comes to mind as I write this.)

“I have chosen to no longer be apologetic for my femaleness and my femininity. And I want to be respected in all of my femaleness because I deserve to be.”

Opening Up the Dialogue

While I found the words and concepts in this book compelling, it’s definitely “preaching to the choir” when I read it. I’m bought in. I agree. Still, it didn’t just reinforce my beliefs, it also opened my eyes a little more, made me think a little differently. Imagine what it could do in the hands of someone not yet “bought in” but open to growth and change.

We Should All Be Feminists should be mandatory reading in schools. As Adichie states in her book, if we want change, we have to start earlier, teach our kids a better way. It’s books like these that will actually help forge the sort of dialogue needed to do that. So that one day feminism won’t be a curse word and instead, we will all really be feminists.

“My own definition is a feminist is a man or a woman who says, yes, there’s a problem with gender as it is today and we must fix it, we must do better. All of us, women and men, must do better.”

One thought on “Feminist: A Curse Word”