The first time someone said the word “Nanowrimo” to me was in a Starbucks. An established author, who kindly met me for a jolt of caffeine and advice, wiggled in her seat and with a huge smile said, “I won Nanowrimo this year.” I was glad she gave me some context in her sentence, otherwise, I would have thought Nanowrimo was some sort of science experiment aimed at making a miniature rhinoceros.  (When she said it, it sounded like Nanorhino to me.)

From her expression, I knew I should be impressed. And, winning any sort of writing contest always sounds impressive to a fledgling writer like me. But at the time I didn’t quite grasp what it meant. In fact, I didn’t really grasp what it meant until last Wednesday night, my first attempt at Nanowrimo.

But first, do you not know what Nanowrimo is?

If you’re not a writer (or apparently even if you are) you may not be aware of this thing that is not a small animal, but actually a writing contest, of sorts. My debut novel (The Travelers, Saguaro Books) is still a baby, just a year into publishing, which means I’m just a year into the greater world of authorship. I’ve cast away my notebooks and put myself out there. And “there” can be a very scary place. But it’s also filled with wonder. I’ve discovered social media can actually be fun and there are tons of writing conferences and programs to flex my writing muscles I didn’t know about before, like Nanowrimo.

If you’re not a writer (or apparently even if you are) you may not be aware of this thing that is not a small animal, but actually a writing contest, of sorts.

In short, to explain Nanowrimo, I’ll steal from its website:
National Novel Writing Month (NaNoWriMo) is a fun, seat-of-your-pants approach to creative writing. On November 1, participants begin working towards the goal of writing a 50,000-word novel by 11:59 PM on November 30. Valuing enthusiasm, determination, and a deadline, NaNoWriMo is for anyone who has ever thought about writing a novel.

OK, that really doesn’t explain it well, except to tell you what the acronym stands for. They need some better writers for their website. (Irony) 🙂

I like to explain Nanowrimo as Fitbit for writers. You log on to the website, create a profile, add buddies and then track your progress. The goal is to write a 50,000-word novel in one month. It has graphs and charts that help you track your progress. Little badges pop up in your dashboard when you’ve reached certain goals. It’s like virtual writing Girl Scouts. And winning it means accomplishing your 50,000-word goal. So there are many winners.

I like to explain Nanowrimo as Fitbit for writers.

At first, I thought, what would make someone really stick to this?

If winning Nanowrimo doesn’t mean anything more than bragging rights, why is it so popular? (And it is really, really popular among writers.)

Well, I found out the answer soon enough.

On Wednesday, the first night of Nanowrimo, I finished my day job work at 10:00 pm and opened up a blank page in Word. It was already late and after I tucked my daughter into bed, I decided I’d just write a little bit. I didn’t really have any idea what to write. I only knew I had to write a new novel. I am at the end of writing a novel already, but I really wanted to commit to doing Nanowrimo the right way – write a novel, from scratch in one month.

The keyboard hummed beneath my fingers. I itched to write. Instead, I stared at the blank page. I had the outline of an idea, a very brief outline. But I didn’t know where to start. So I just typed. It took several fits and starts. Research pulled me away down a rabbit hole again and again. And I rewrote the first paragraph five times.

At this point it was after 11:00 and I had 500 words. I told myself I could make up the words tomorrow. (To make things harder for myself, because I like to do that, I also have a revised goal of working on my Nanowrimo project during the week and working on finishing my already started novel on the weekends. This means I need to write more than the average 1,667 words daily. Five hundred words aren’t even close.)

I debated stopping, but I couldn’t put down the computer. I pushed forward. Five hundred words turned into 700, then 1000. It was getting close to midnight. I knew I needed to stop and go to sleep. I’ve read all these studies about how lack of sleep is linked to increased risk of cancer and heart disease and with my sleep habits I don’t know how I don’t have both yet. Even with that morbid knowledge percolating in the back of my mind, I still couldn’t stop.

As the clock drifted to midnight, the number crept up to 1200 and 1300. I was so close. I kept writing. The night grew darker and darker. I reached the end of the second chapter and started the third. Paragraphs spilled out on the page. They weren’t the best paragraphs ever written, but they were flowing out of me.

Then I glanced at the bottom corner of my screen. In tiny little black letters it read 1747. I’d done it. I’ve reached the daily goal and I’ve surpassed it. Even still, I wanted to keep going. But I knew I shouldn’t. I needed to go to bed. It takes me anywhere from 1-3 hours to turn off my brain and fall asleep. I had a long night ahead of thinking about my book to do. 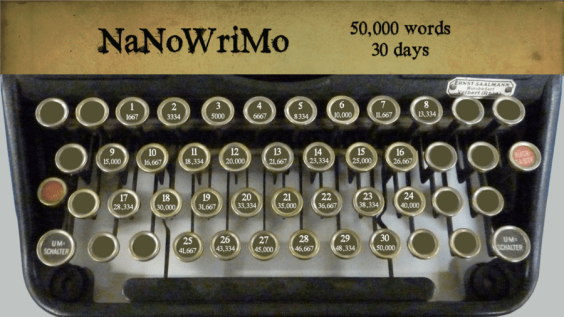 As I shut the computer, I felt I now better understood the allure of Nanowrimo. It’s a contest with yourself. It pushes you to your limits and maybe even over them. I thought back to the fellow writer in the coffee shop and her proud smile. I get it now. She deserved to be proud. It’s not easy to write a minimum of 1600 words every day. I thought I was a prolific writer before Nanowrimo. I thought this would be easy. It’s not. Nanowrimo is more than just a month of writing a novel, it’s when you discover if you can cut it as a writer.