If you asked me a year ago I’d say I probably knew more than the average person about black history. I like to read. I like to learn. I seek out information. However, if I do it is only because the average might be very low. In school, I learned about prominent African American icons, particularly during the Civil Rights movement, like Dr. Martin Luther King, Malcolm X, Rosa Parks. But to say learning about these three people and a handful of other limited facts is akin to knowing black history is like saying I’ve read the book jacket of A Brief History of Time and I know theoretical physics.

Like many things in life, I had no idea how ignorant I was on the topic. Essentially, I didn’t know what I didn’t know. It took a 3-book graphic novel series called March to show me my folly.

March is a black and white graphic novel trilogy about the Civil Rights Movement, told through the perspective of civil rights leader and U.S. Congressman John Lewis, according to Wikipedia.

So, I ask again, what is March?

Like most things, that answer is very subjective. For me, March is a time machine. It catapulted me back to the Civil Rights Movement era and into the body of peaceful activist John Lewis. It’s a way to experience history through his kind, strong, resilient eyes. It’s a heartbreaking reminder of America’s very ugly past and, even worse, a reminder that as much as things change, some things continue to remain the same.

It also doesn’t look back at history through a lens of nostalgia or sanitize history in a way many other books will do. Coupled with stark black and white images that twist your insides, each book builds tension and lays bare brutal truths. These truths were not taught in the textbooks of my youth, which glazed over the movement with a sugary coating sweeter than the sticky toppings on a donut.

These truths were not taught in the textbooks of my youth, which glazed over the movement with a sugary coating sweeter than the sticky toppings on a donut.

To find these truths, we must seek knowledge elsewhere and, luckily we can often find it in books.

Sobbing on a Plane

Completing the March graphic novel series has taken me nearly a year. Each time I finished one book, I’d need to shore up my emotional reservoirs before delving into the next. I remember reading the very first book on an airplane to Atlanta, which happens to be where John Lewis is a Congressman. It was a coincidence. I’d just been looking for decent airplane reading material and grabbed the tome off my shelf on the way to the airport.

During the flight, I ordered a glass of wine. When the flight attendant came to get my payment, I was sobbing like a child while turning the last pages. She looked at me and down at the pages and told me the drink was on the house. Of course, I looked like an idiot crying on the plane over a graphic novel. I didn’t care. My tears were tiny raindrops compared to the storm of hardship and brutality captured in March.

I started to think of the books like children, siblings even. Book 1 is the youngest sibling. It encapsulates the hopeful exuberance of youth, the beginning of a movement when people are filled with the possibility of action and change. They resist and struggle, but don’t yet feel the fatigue of the fight. It’s too new.

Book 2, however, is the quintessential middle child which described how the movement struggled to find it’s footing and gain attention. Filled with righteousness, it grew louder and more confident, bumping up against its siblings. It also leaves the reader feeling a bit unfinished and yearning for more.

With its somber and reflective qualities, Book 3 is the wiser, mature older sibling. It is also thicker and denser, more developed even than its two previous counterparts. In a way, it felt like it had to get everything out onto the page for fear that at any moment the book might explode and the story might be lost forever.

About halfway through the wise words of book 3, a realization hit me. They don’t teach anything like this in schools. In school, we learn the “good” stuff. We learn about firebrands or figureheads of black history. They’re generally summed up in tiny paragraphs recounting their actions and deeds. We don’t really learn anything of substance about these historical figures or the many other African Americans who don’t get paragraphs in history books but undoubtedly reshaped American history.

It’s like Paul Revere. Very few people realize he wasn’t the only rider that night. Unless you’re a real history buff, even if you knew that you can’t name the other riders. Thanks to a poem, Paul Revere is the only one we remember. When it comes to black history though, there’s no poem to blame for the lack of recognition in our historical collective. It seems much more like an ironic product of the very thing the men and women of the Civil Rights era tried to change.

I can tell you I don’t remember learning about John Lewis in the official portion of my high school history class. I was lucky though. I had a history teacher who went beyond the curriculum. For extra credit, you could come watch movies like Malcolm X and then stick around to talk about him and his impact on history. My guess is this is a rare type of teacher who does this.

Why Everyone Should Read March 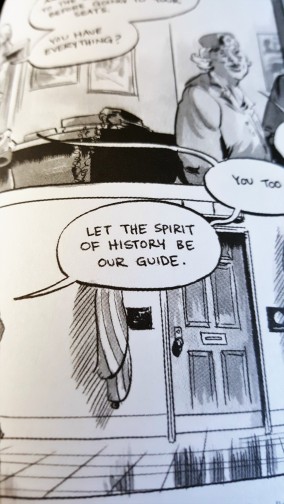 Even with my moderately augmented historical education, as I read the names of the men and women in March, those who protested peacefully as their noses were broken, their heads were concussed, as the anger built inside me, I wondered how it was I’d never heard of them before. And I kept thinking I could never be as brave or strong as these people. They were true heroes.

Many people have heard of Emmett Till and his story should be known. But what about Johnny Robinson and Jimmie Lee Jackson. These men, really boys, were only a few of the victims of the evil racism ensconced in US history and the degree of which not fully appreciated by someone like me who before reading March didn’t know their stories or names. It’s learning those stories that teach us the real history.

Before reading the March series, I didn’t know the deeds of the Fannie Lou Hamer, C.T. Vivian, Amelia Boynton and Margarete Moores of the world. But now I do. Now I don’t just know this history like I know needless facts such as in 1492 Columbus sailed the ocean blue. I know it in the way all people should know history, not just by dates and events, but through people and what they experienced.

When history is reduced down to numbers and days, when the personal element is removed, it’s easy for people to put up barriers between themselves and hard historical truths. When history is just a number, how can we possibly understand we shouldn’t repeat it? Our books have made it easy to look at history as one would look at science, detached and cold. This isn’t the way to know history.

If you read March and aren’t moved in your soul to better know not just black history but all history, then I’d argue you might not have one.

Everyone should read March. Everyone.