Thursday Thoughts: March: Book One – Learning From the Original Resistors 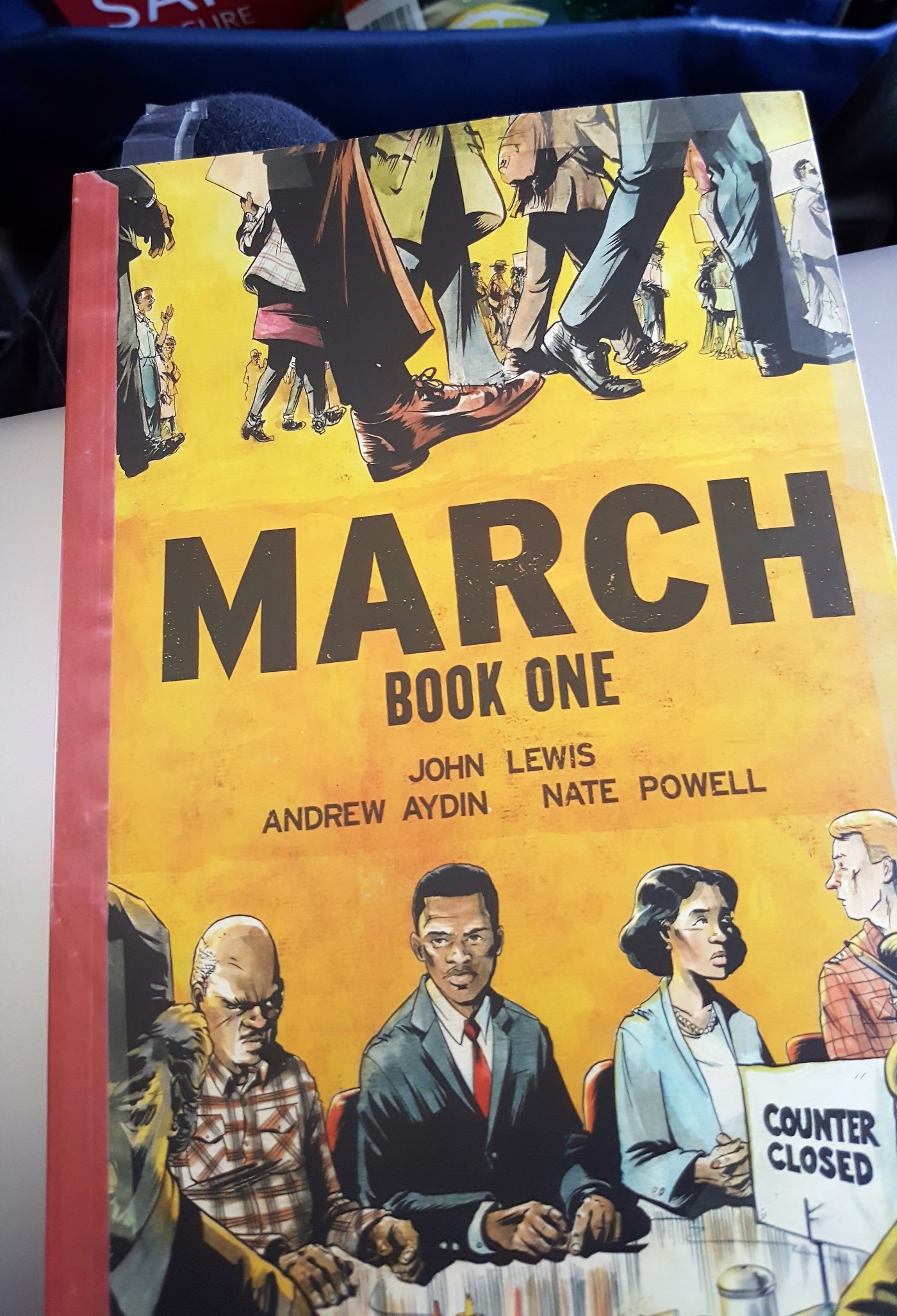 I’ve been wanting to read March: Book One for quite a while now. I first discovered this book when I was researching books for a blog on the power of protest. The concept intrigued me, a graphic novel series chronicling the life of John Lewis. I’d heard of Lewis, of course, and his name has certainly been in the news lately. But I knew of him really only as a Civil Rights icon. I’d never learned much about him in school. He was a chapter in a history book I had in high school and probably not even that.

Dear Educational System, If you want to really teach history and have kids connect to it and understand, maybe you should start using books like this one. In an effort to help you out – here is a lesson plan for March.

Lesson 1: Don’t be a chicken

The graphic novel opens on the inauguration day of President Barack Obama when a woman brings two young boys to the office of Congressman Lewis, hoping to get a glimpse of his life and he happens to be there. Congressman Lewis proceeds to tell them the story of his life. The graphic novel flips back and forth between inauguration day and different points in Lewis’ life.

The flashbacks start out when Lewis is young boy, living on a farm in Alabama and preaching to his chickens. This seemingly insignificant relationship with the chickens I found to be one of the most compelling and metaphorical aspects of the story. Lewis loves his chickens. He knows each one, can see that they’re each unique. He even names them and he gets very upset when they have to kill them for food or give them away. It shows the depth of his kind and loving soul.

Then one day he goes to Buffalo, New York to visit family and they buy a chicken at the local butcher. Lewis doesn’t have a problem regarding the fate of this chicken. He doesn’t know it. What makes this detail so interesting is it’s conscious acknowledgement of our human ability to separate from the unfamiliar. It’s a small part of the book, but I found that it expressed something important about how we compartmentalize.

As a person just now joining the protest movement for the first time in many decades (I was much more “protesty” as a teenager and young adult), it’s easy to forget what drives people to protest and that’s usually injustice. And injustice hurts. It makes people angry. I know I’m angry, even at people I care about, because they aren’t fighting back against injustice and some are even agreeing with what is happening in the U.S. I’m angry at people I don’t even know. Do I hate these people? Some of them, yes, I think I do. And, trust me, it’s hard for me to hate. I’m just not built that way. Unfortunately, hate begets hate.

That’s why when I got to the following page, I honestly thought it was crazy and impossible.

Find love for your attacker? I can barely find love for the people who voted for the current U.S. President and Lewis and his fellow peaceful resistors taught and lived this idea of loving people who are not just mentally hurting you but physically hurting you. If they can do that, I should be able to at least not hate right?

March: Book One spends a lot of time on how Lewis learned and then taught not just the tactics but the mentality of peaceful resistance. And you had to be very strong to do it. It wasn’t easy. At times it’s even just hard to read how in the face of such anger and hate, a group of people could stay calm and not fight back.

This is the type of strength I wish more of us had (including myself). Even if you’re not someone who wants to protest or resist, you can learn from this story. It’s essentially a playbook for how to stand up to a bully and we all know bullies. But it also shows you how to keep your own soul and humanity in the face of terribly depravity.

Lesson 3: History is much more interesting with visuals

Why a graphic novel? I found myself wondering that as I was reading this book. Lewis’s life is fascinating. There are other books about him. Why did they make this story into a graphic novel? I can’t speak to their motivations. But, I can say that the images have a classic comic book sense about them. There’s no color. It’s black and white. (Intentional metaphor, probably. Trying to invoke a sense of being in the past. Probably. I’m sure the choice was made for many reasons.)

But, it’s also more than that, these drawings feel like sketches. They aren’t the colorful fully formed pictures you see in other graphic novels. And I think that’s perfect. The sketches breath life into the story without providing too much detail that it takes away from your imagination because to truly understand you have to imagine also. The drawings give an outline and let your emotions fill it in.

The story itself unfolds in a similar fashion. Each seemingly brief bubble is packed with poignant and chilling scenes that often feel all too relevant in a country that should have left this past behind long ago and has instead, in a manner of months, managed to resurrect it.

Lesson 4: There is more to history than just events

I do not know what it is like to be black. But I do know what it is like to be a woman and to have people treat you as lesser or talk down to you or harass you just because of your sex. Still that is not the same as what Lewis and countless others like him experienced. And so this graphic novel makes me grateful because while I will not know the extent of this struggle, not everyone can, that doesn’t mean we can’t be aware. We need to experience the plight of others, get close to them, understand them and try to feel what they feel. We need to see people as individuals with different ideas and hardships. Or else we will be indifferent like we are to the chickens at the meat counter.

It’s action that makes change. Before I read March, events in history, like the bus boycotts or Rosa Parks, were part of my historical vernacular, but knowing something happened and reading about how it happened are two very different things.

March shows what it really means to take action. Not to talk and complain or ignore, but to come together and act, peacefully. In the scenes where Lewis and his group simply walk into restaurant, sit at the counter and ask to be served, they say about 3 or 4 sentences total. There’s no need for talk, the actions speak for themselves, peacefully, at least for the protesters.

Action is also enduring. One of my favorite panels in the book is when Lewis is recounting the bus boycotts, which lasted over a year. It shows a picture of an empty bus behind a horse and buggy.  That one panel shows how enduring action and sacrifice can lead to change. It’s not easy, it’s not fast. But it can happen. It shocked me how one little graphic novel could say so much.

They say if you don’t learn history, you’re doomed to repeat it. I argue history repeats itself even if you do learn it. We’re living proof right now. What kind of people put a demagogue in power when they saw what happened to Germany in WWII? Apparently, the people who pay lip service to learning from history but actually learn nothing. Reading this book I didn’t just see echoes of what is currently happening in the U.S. There were direct parallels, like this one. Sounds like something we’re hearing now, no? 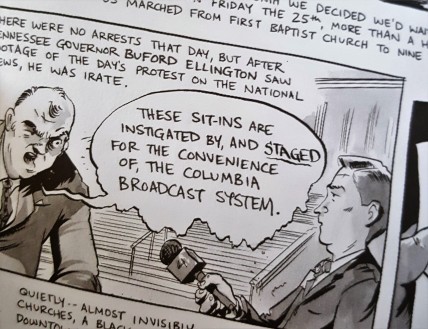 Still, there is solace to be taken and I found this part of the book very helpful. Perhaps instead of looking at history’s mistakes we need to look at history’s triumphs and that is what this book does.

This book shows how people can rise up and make change. We need to take what is in this book and learn from  it. Learn from what they did right. We should “let the spirit of history be our guide,” as the book says.

The core of this book is the concept that individuals can come together for a common purpose of justice and change. It’s something I know I needed to read right now. In fact, I read this on a plane and had tears coming out of my eyes because I was saddened and moved and inspired all at the same time. I’m sure the woman next to me (a lovely executive from Chick-fil-a) thought I was crazy. But then I got off the plane and saw this. (I just happened to be on a plane to Atlanta.)

It just seemed so coincidental that this was what I saw right after reading the book. At that moment, I thought of this line.

And I took it as a reminder that we all need to keep marching. And I will.

3 thoughts on “Thursday Thoughts: March: Book One – Learning From the Original Resistors”