Longest Travel Day Ever, But I Made It! 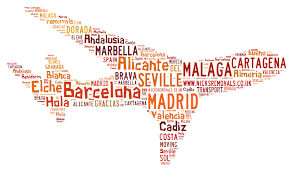 It’s been 20 hours since I dragged my overstuffed carry-on suitcase through the doorway of my house. After three taxis, a three-hour train ride, countless hours at the airport, a six-hour flight and one narrowly averted snowstorm, I’m finally here, at my hotel in Spain. Exhausted and excited.

When I left my house in the wee hours of the morning yesterday, thick clouds grayed out the sun and the rain pattered down on my head. It would soon turn to snow. I hoped I would escape in time.

My suitcase, small enough to fit in an overhead bin but probably heavier than me, pulled me down the gradual slope of the driveway toward the taxi. I pride myself on being a frugal packer. Less baggage, more fun. It should be my life motto.

I’d been determined to bring only a carry-on suitcase for an 11-day trip in Spain. And I fit 11 days’ worth of clothing, including three pairs of shoes (one of which were knee boots), toiletries, an umbrella and two hard copy books, into my bag. (A youth spent playing Tetris finally paid off!) Since there is no way two books would suffice, I downloaded another four on my Kindle. When traveling, Kindle is really very helpful for a book junkie who refuses to use an appropriate-sized suitcase.

After stumbling under the honeycombed ceilings of Union Station and then through the cavernous Penn Station, my arm ached from pulling my anvil-like suitcase. To be honest, there were times I silently wished I had a less strict moral code. It was then I decided I didn’t want to lug that thing around the airport. Nope. After all that effort I put into weeding down and pre-packing, the bag got checked. I’m still sticking with my less baggage, more fun motto, however.

So, why the long, circuitous route to the airport? I live in the suburbs of a city, approximately 30 minutes from two major airports. This self-inflicted extended travel voyage is more evidence of my frugal nature. It cost twice as much to fly out of a Washington, DC airport compared with New York and all the flights transferred through New York anyway. So, I decided, even though I wasn’t paying for my ticket, I just couldn’t spend that kind of money. Instead, I booked a cheap train ticket from Union Station in DC to Penn Station in New York and hopped in a taxi to JFK airport.

For the most part, I did not regret the decision. It allowed me not just reading time but writing time, too.  I worked on the drafts of both my latest novel and my beta read of friend and fellow writer Lisa Tully’s upcoming memoir about her year in Spain. (Um, perfect!)

Worst parts (other than lugging around overstuffed carry-on) of traveling for 20 hours via multiple different transportation methods:

Best parts of traveling for 20 hours:

When one travels, it’s best to have a soundtrack. Here are the artists now forever linked in my mind with my travel to Spain.

Now I’m ready for the adventure to really begin.

5 thoughts on “Longest Travel Day Ever, But I Made It!”