Basements, Danger and Other Things I Learned in Madrid 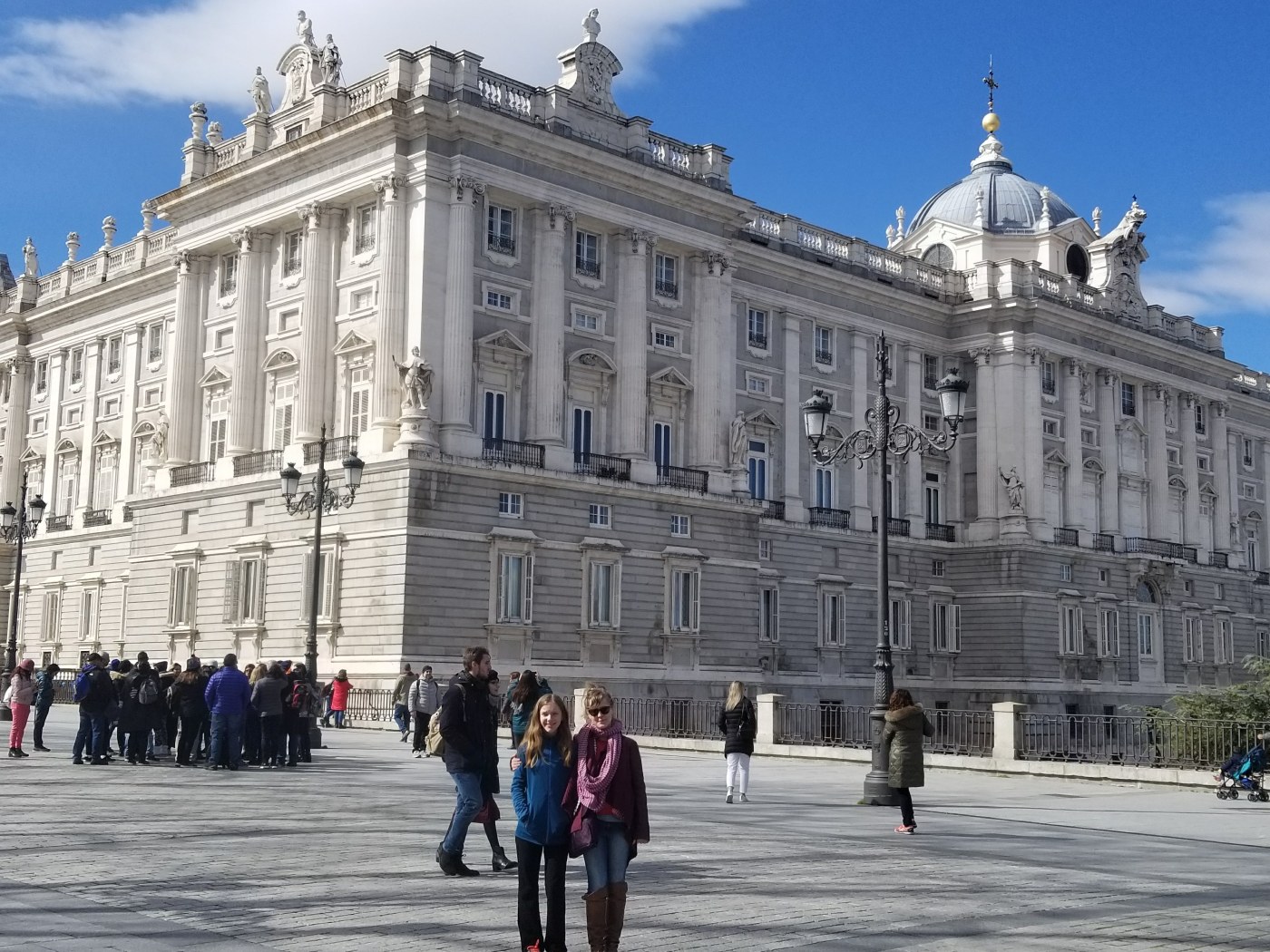 The taxi driver swung around the traffic circle, flashing his lights for other cars to move out of his way. He narrowly missed a smart car (can those things even be called cars?) and threaded into a narrow space that looked like it wouldn’t fit a motorcycle. I wondered if the statue of a woman driving a chariot, a fish shooting water out of its mouth at her feet, would be the last things I’d ever see. 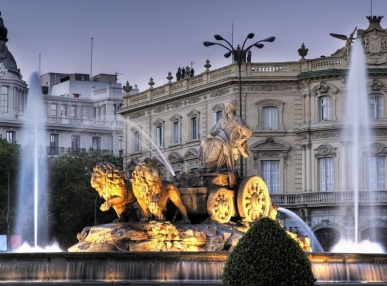 The driver skimmed the edge of the sidewalk. I gripped my daughter tight in the backseat, hoping we’d make it back to the hotel alive. The driver gunned the gas, sprinting down the dark streets, which looked vacant and lonely compared to the La Latina neighborhood we’d just left in the city center of Madrid.

Our hotel, while beautiful and extremely accommodating, hovered on the outskirts of Madrid, close to the airport.  During my five night stay, I often saw men and women dressed head-to-toe in bright red capes and jackets with sailor-shaped hats. The call sign of the Iberia airlines flight attendants, I’d assumed. It catered to the convention and airline workers contingent.

As the cab screeched to a stop in front of our hotel, deserted except for a man with his arm up hoping to take our cab when we exited. I thought about warning him, he might be better off walking, except, it was dark and would take an hour to get anywhere still open.

It was in this moment I learned my first traveling lesson during my trip to Spain, one of many to come.

Lesson #1 – Splurge for the hotel in the city center.

While I travel often for work, I’m spoiled. I don’t have to do anything in terms of travel planning. I don’t even look at my airline ticket until I’m in the cab cruising down the highway. (More than once I have told the cab driver the wrong airport and had to turn around once I checked my phone.) So while I am a seasoned traveler, I am not a seasoned travel planner. This might be why I didn’t understand staying in a hotel on the outskirts of the Madrid city center would be less than ideal for a family vacation (and also subject my family to life-risking taxi rides).

Moral of the story: After adding up all the taxi and Uber rides, it’s likely they’d equal the cost of a comparable hotel room in the heart of the city center.

Lesson #2 – The streets of Spain are one giant bullfight. 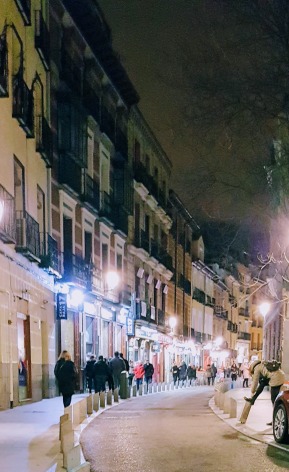 The man walked down the middle of the road, carelessly swinging his arms. He stared off down the road, but he didn’t see it. It barreled toward him, gears grinding. If he had seen it, he would have moved. He wouldn’t have stood in the street while a car curled around the buildings, plunging in his direct path without regard.

My stomach knotted, ready for blood. At the very last moment, the man casually stepped to the side. The car swept past him, grazing the fabric of his bubbly red jacket. The car didn’t break. It didn’t stop. Neither flinched.

The man kept walking. The car rushed past us. I pressed my daughter back with my arm against the stuccoed walls. My heart pounded as if I were a spectator watching a bullfight. In retrospect, the bullfight, an iconic symbol in Spain, seems to represents an underlying aspect of Spanish culture – taunting death. It’s as if by disregarding and teasing mortality, it can have no hold on them.

Moral of the story: The people of Europe may be used to being grazed by a passing car, but anyone who cannot picture herself or himself in a bullring, should stick to the “sidewalk.” (In quotes because a foot-wide stretch of stone does not really constitute a sidewalk.)

Lesson #3 – Respect the schedule or get mugged.

As preparation for our trip to Spain, I told my daughter a story. It was a story of my honeymoon. Not a topic most almost teenage girls care about, but this was important because my daughter likes her schedule and disruption of it can cause some angst. It was important to prepare her.

The story went something like this… On my first trip to Spain over a decade ago, my husband and I were newly married. Our honeymoon dripped thick with love and excitement for the future. After flying into Madrid and immediately jumping on a train to Seville, we couldn’t wait to walk the ancient streets.

Hastily tossing our bags into our hotel room and changing, we stepped out onto winding street, snaking off around a bend. A Spanish sun pressing into our skin, imprinting us with its heat. We clasped hands and strolled down a snaking street. We knew of the siesta, a mid-day rest. We did not think it to be something strictly observed. We strolled through the empty streets looking doe-eyed at each other, not realizing by simply being on the streets, me in a bright white dress, marked us as dumb tourists.

We were promptly “mugged” by two teenagers who zoomed by on a moped, grabbing my purse right off my shoulder. (Although very irate at the time, my husband has since downgraded “mugged” to “purse snatched.” He felt “mugged” was too extreme a description.) Whether mugged or purse snatched, if we’d respected the siesta and just relaxed in our hotel, I doubt we’d have been targeted by the moped kids.

Moral of the story: In Spain, people take a siesta. They eat dinner at 9 pm. This is how it is. Although anxious at first, my daughter adjusted quickly to the Spanish schedule. She learned how the streets of Spain come alive after the sun goes down. Children toddle after their parents, people lounge in restaurants and bars. She embraced the differences. It’s smart for anyone to do so. You might be less likely to get mugged (or purse snatched). You’ll definitely be more likely to enjoy yourself.

Lesson #4 – Art filled with cherubs is not for me.

The first day in Madrid with my family was chilly. The wind raked against our hotel so loudly it sounded like invisible ocean waves crashed against the windows of our room. Although we wanted to walk around the city, the weather made it unpleasant. We decided the best option on a cold, windy day was a museum.

With accolades like the best collections of European art in the world, we decided to go to the Prado Museum. Generally, I like art. Having lived either in New York or just outside Washington, DC, I have probably been to more museums, art or otherwise, than the average American. And I typically find something to enjoy at a museum.

After about the fiftieth portrait of pale-faced, ruby cheeked member of a royal family or battle murals, I realized, I was not enjoying the Prado. What was wrong with me? I’m cultured, right? I thought to myself.

Apparently, I’m not cultured enough to like giant paintings with dramatic religious motifs or old, creepy men eating babies. (No joke, this was a painting.) My husband, in his typical manner, makes a joke of everything, which helped. It wasn’t until the Roman sculpture section that we stopped joking. Note: the marble busts of old Roman emperors are more interesting than Goya painting some King to look like a 50-year-old baby. (Sorry Goya. I’m sure you’re great and I just don’t get it.)

Moral of the story: Don’t let the weather push you around! (Take that, climate change!)

Lesson #5 – Don’t be afraid of basements.

A woman blew smoke out of the side of her mouth and motioned us inside. It was a bar, packed with people sipping drinks. The chatter of many languages thickened the air as much as the heat wafting off the people. It wasn’t what I expected from the Yelp review. I turned to my daughter, only 12, and frowned. A bar wasn’t exactly a place where we could get her a decent dinner.

I was diagnosed with celiac disease before people had ever heard of the word gluten. The explosion of the gluten-free craze has been both a blessing and a curse. More restaurants know of it now. But places take it less seriously as it’s often viewed just as a diet fad. Therefore, finding a place that has both good food and takes gluten-free seriously is challenging, even in the US. When La Concha popped up on my help search with its dozens of celiac-friendly reviews, we’d hopped in a taxi and headed to the city center.

I spotted a set of stairs at the end of the narrow bar. It led down to a small basement area with square tables and tiny wood stools that looked like they were made for children. A woman motioned for us to sit down. In my rusty Spanish, I asked her about gluten-free options. She tucked a menu into my hands, noting the gluten-free options and smiled. It only got better from there.

In the basement, with its white-washed walls, covered in tiny footprints and sketches reminiscent of pencil drawings (which I liked better than anything at the Prado), we drank house-made Vermouth, ate tapas of sardines and shrimp and cheese, each one better than the last. Each one meticulously separated into gluten and non-gluten. Even my daughter enjoyed it. And she is notoriously difficult to please.

It was gluten-free, stress-free and fun in that basement restaurant.

Moral of the story: Don’t fear weird basement restaurants, they may just be the gems hiding in the rock.

Next up: Segovia and Granada…

5 thoughts on “Basements, Danger and Other Things I Learned in Madrid”