We spent the morning in the bright sun, sipping coffee and sampling food at the legendary San Miguel Market in Madrid. It was hard to believe the weather would change so drastically at our next stop, just an hour north, in the town of Segovia.

We’d checked the weather app. It promised temperatures dipping at least ten degrees lower with rain and possibly even snow. But the promise of an ancient Medieval castle made us venture up the mountain anyway. We would not miss the Alcazar de Segovia.

As we drove out of Madrid, drops of white clouds dotted the blue sky. Soon they spread out and connected together forming a gray blanket. Then came the rain.

We flicked on the windshield wipers and didn’t even think of turning back.

When we reached Segovia, we awed at the ancient Roman aqueducts arching up over the city. The unrelenting gray sky and thick sheets of rain blunted the color of the giant arches, but not its grandeur. As our car looped around the bend, I craned my neck to see them through the back windshield.

After parking our car, we tucked our heads into our jackets and set out to the castle.  It was siesta and the streets were empty. This had been part of our plan: spend a few hours in the castle during siesta, then sit at a cafe and enjoy the sights of Segovia. (In retrospect, it wasn’t the greatest plan.) 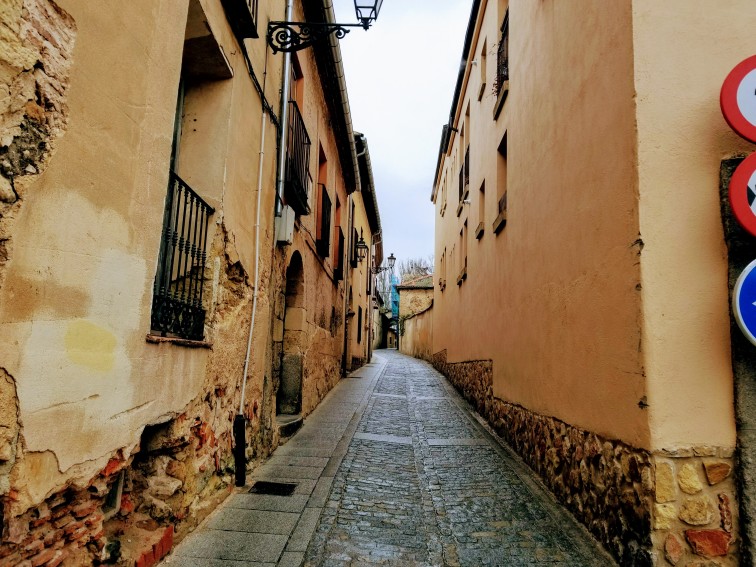 The rain stung our skin with its sharp cold drops, seeping through our inadequate cotton layers.

Sand colored streets, marked with the cracks and nicks of time, made us feel as if we’d stepped back hundreds of years into the past. The depth of the history was almost a protection against the cold.

We followed the long pointing arrow signs until we reached the castle. Its round towers and peaked roofs looked as if they’d risen from the pages of a fairy tale. Even the dreary weather felt appropriate thanks to how many times I’d watched Monty Python and The Holy Grail. (If you’ve seen that movie, the weather throughout the film is much like in Segovia.) 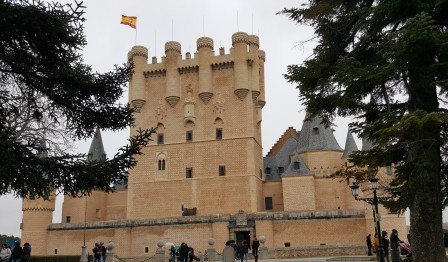 The grey air with its hint of snow could not ruin the majesty of the castle. This was a castle cursed by witches. A castle that locked princesses away in its towers. A castle where girls lost their glass slippers on its steps. The stuff of stories.

We walked over the bridge into the castle. Beneath it the earth plunged sharply into oblivion. I imagined dragons once lived at the bottom, charging up from the darkness to guard the gates. (It was my first time walking over a moat! I felt like I was walking straight into a fairy tale.)

Inside the castle, the air turned even colder. The thick stone walls repelled everything, including warmth. I suddenly wished I had layers of heavy clothing. It was freezing.

The sand-colored rooms glittered with knight’s armor and gold-plated ceilings. In one room, statues of Spain’s rulers sat in judgement above us. The stories of their reigns and their deaths documented on plaques at their feet.

One king was killed by a bear. (I imagined the circumstances leading to his death. A hunting party maybe? A trip across the country to meet with a delegation? Or an ego-driven need to best a wild beast?)

Either way, a gory death seemed befitting of the castle. Stories of the Medieval times never seem happy. They’re always filled with boils and pestilence, murder and death. Even the Disney versions of fairy tales have a dark undertone of monsters and queens always trying to kill people. It seemed like a pretty morbid time. (Especially if you were a stepdaughter.)

Standing within the fortress walls of the Alcazar de Segovia, it was not surprising a castle like this could spawn tales of hardship and woe. Despite its stained glass, rich tapestries and mural-covered walls, the castle felt bleak. Happiness was like the heat, the stone walls just wouldn’t let it in.

For a writer like me, it felt ripe with stories. (Side note: This is the castle that inspired Walt Disney’s Cinderella’s castle.)

My favorite room in the Alcazar de Segovia wasn’t any of the main rooms with their arched windows and ornate ceilings. Rather, I found myself enthralled by a tiny round room off the edge of museum portion of the castle. Hidden behind a narrow doorway, it had a high pointed ceiling and plain rough stone walls.

The only window was a large square opening about knee-height, which narrowed into a tiny hole looking out onto the walls of the city and the expansive cliff below it. I hypothesized it might be a space where they placed cannons to ward off invaders.

There was nothing extravagant or obviously special about the room. It was only about six feet in circumference. But I imagined the people who may have darted in and out. Perhaps they peered through the tiny hole and spied on the town below. Or lit the end of a cannon and plugged their ears as it exploded. Or maybe an alchemist shut himself away for hours, trying to turn water into gold. Of all the rooms, this was the one that made my imagination whisper.

Of all the places I’ve seen, it’s rooms like this that make my imagination bubble.It’s a place where mysterious collect like seashells at the shore, just waiting for me to find them, even when it’s raining.