March Wrap-up: Books, Writing and a Trip to Spain

With a burst of cold air whipping across the East Coast of the US, I had no problem snuggling up in my warm house and keeping up my reading pace at the beginning of March. As I neared the middle of the month and got on a plane for Spain, I thought I’d have plenty of time to read on the trip. Turns out, when you visit another country, it’s best if you put down the book, actually leave the hotel and watch the stories that unfold around you. I know. Crazy.

So, I didn’t quite keep my recent pace of one book every two to three days. And, despite lofty ambitions of finishing a beta read for my friend and finishing a revision of my latest work in progress, I did none of those things. The trip to Spain was a Tasmanian devil whirlwind of sites and car trips, bus rides, trains, walking, walking and more walking through winding streets that narrow until only one person can pass. It lasted until March 31 when we arrived back home just before midnight on the eve of April.

Soaking in the sites of Spain, which dripped with history and culture, made taking a little break, siesta, from my reading and writing sprint worth it.

That isn’t to say I didn’t read at all or find some literary activities. Here’s a brief look at the literary portion of my trip to Spain and a review of the books I read before and while I was there.

Guess what? Spain has lots of bookstores! And if I saw one open, I went in it. Many are small and cute and have that indie bookstore feel I love.

Even with my rusty Spanish, I managed to read a few of the books. Of course, they were books like Donde Viven Los Monstruos (aka, Where the While Things Are.) But I’m still proud of my kindergarten Spanish reading level.

Plus, I got to force my daughter to be Don Quixote, while I was Sancho Panza, sort of. Making a fool out of yourself with your daughter is a priceless vacation experience.

We also stayed in the literary neighborhood of Madrid known as Las Huertas, and also commonly known as Las Letras (“The Letters”). Several times a day, we walked along the Calle de las Huertas, which is stamped with quotes from famous writers. Of course, they were much more complicated than Where the Wild Things Are and I could only understand a bit of each quote. It didn’t matter, I could feel the energy of the literary world coming up through my feet. I didn’t need to read Spanish well. It was literature through osmosis.

It’s also impossible to escape Cervantes, especially in the literary neighborhood of Madrid, who according to this plaque, Vivo Y Murio, lived and died in Madrid. Whether or not I like Don Quixote is irrelevant. Cervantes is a legend, lauded as the greatest Spanish writer of all time and one of the best writers of all time. Standing in the street where he once walked, I felt a little shiver down my spine. It’s not often you walk in the footsteps of greatness. 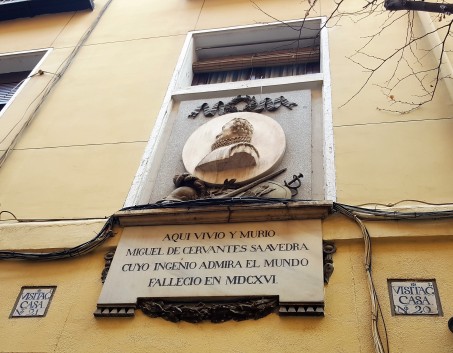 I did manage to read 9 books. Not my usual pace, but I think it’s still pretty decent. Here is what I read, with a very brief review. 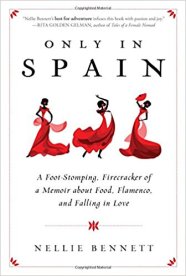 Book 1: Only in Spain: A Foot-Stomping, Firecracker of a Memoir about Food, Flamenco, and Falling in Love by Nellie Bennett

Brief Review: I thought this would make a great preamble for my trip. Unfortunately, it was a bit disappointing, at least for me. I had trouble connecting to the main character (she felt very shallow) and the writing left a little to be desired. It felt like a young woman’s journal an editor tried hard to make into a book. But it does have some bright spots, particularly when talking about dancing. If you love Spain or flamenco dancing, you might like this book. 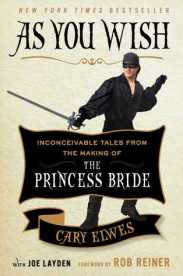 Book 2: As You Wish: Inconceivable Tales from the Making of The Princess Bride by Cary Elwes

Brief Review: I listened to this as an audiobook and would highly recommend it. Elwes is an engaging narrator and many other people from the movie stop in to read quotes and lines. If you love The Princess Bride (I have yet to meet someone who hasn’t), you’ll enjoy this. Plus, Elwes is the only person I know who can make an entire chapter about one wardrobe choice so compelling. 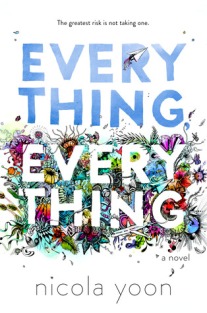 Brief Review: First. I have a superpower. I can predict things not in life, but in literature and movies. It’s less a superpower and more just an affinity for patterns and cues. It’s funny because in real life I am terrible at cues. But in books, I can see it all. I know the end of the mystery in the first few pages. I know the twist in the tragedy. I never thought a book like Everything, Everything would best me. But it’s my kryptonite. I had the trajectory of the book mapped out in my brain. And my map was off! If I thought something would thwart me I thought it would be a thriller or a crime novel. But a YA love story? The author found a way to get to that ending, which I did predict, in a surprising, unexpected and wonderful way. She redrew the map. It ended in the same place but took a new, nonformulaic route. A detour. And it was perfect. Perfect. Perfect.

Book 4: Children of Blood and Bone (Legacy of Orïsha #1) by Tomi Adeyemi

Brief Review: This book had a lot of hype before it ever came out. It’s hard to live up to that kind of hype. And, if I’m being honest, until about halfway through the book I was worried it wouldn’t. It felt a bit derivative. Not the setting, but the characters and the storyline. I’ve read books similar to this, most recently An Ember in the Ashes by Sabaa Tahir. That isn’t to say I wasn’t enjoying it. The writing is well done. The story has a great pace. It’s packed with action and pathos. But there was a bit of, this seems very familiar, maybe too familiar. Then right around the halfway point, it started to change, diverge and really find it’s own way and voice. By the end of the book, I was enthralled. So, if you perhaps felt like I did and didn’t finish it, don’t give up on it. In the end, it’s worth the trip. I’d say, in the end, it lived up to the hype.

Brief Review: This is a great middle-grade novel about a girl who moves back to her mother’s hometown, only to find locals giving her strange looks and whispering about her and her mother. She soon discovers her family has a mysterious and secret history.

At its core, The Gardenia Curse is about a young girl figuring out who she is. Having a daughter about the age of the main character, I think I could really relate to this book. The author does a great job of capturing that uncertainty about your place in the world and self-discovery while weaving it into a story of magic and mystery.

Brief Review: This is part of one of my husband’s favorite graphic novel series, The Sandman series. Since I’m trying to read more graphic novels, I thought it might be a good place to start. The illustrations have a distinct comic book feel filled with emotion and terror. The story is about Dream, also known as Morpheus, and also the brother of Death, of course. Didn’t everyone know the Sandman is the brother of death? Well, after being imprisoned for 70 years by some weird cult, Dream/Morpheus/Sandman, however you’d like to call him, goes on a quest for his lost objects of power. The quest can be gory at times, but it cuts to the heart of human nature in a way that makes you think about life. Pretty deep stuff for a graphic novel. Although I’m probably just underestimating them. I definitely want to read #2.

Books 7&8: Lady Midnight and Lord of Shadows (The Dark Artifices #1,#2) by Cassandra Clare

Brief Review: Here I go again, down the rabbit hole of the Shadowhunters. I am a fan. I’ve already devoured the Mortal Instruments and Infernal Devices series, which are both parts of Clare’s Shadowhunter world and both of which I loved. So how did this series stack up? Well, I really enjoyed the way Clare plays with gender stereotypes. Here the boy is the nurturing caretaker and the girl is the warrior. The rest of the characters are also compelling and I like that Clare continues to focus on LGBTQ themes. My only criticism might be it’s a bit heavy-handed in its political commentary. Not that I don’t appreciate when authors reflect the world around them and it’s hard not to be heavy-handed at the moment. But Clare is usually a bit more subtle in her commentary and I like subtlety. But it’s a small, nitpicky thing. Plus book #2 left off on a huge cliffhanger so it’s not like I haven’t already pre-ordered book #3, out in December.

Brief Review: This is a book about friendship and love and loss and self-discovery. The lyrical prose and blunt acknowledgments of the harsh realities of being a teenager mix together to create a book that is completely relatable for anyone who had even a moment of awkwardness as a teen and anyone who has ever felt alone or confused. There is something about this book. It’s a simple story. Boy meets boy. They become friends. They go through the ups and downs of being a teenager and they discover love. But it’s truly incredible. It weaves its words around your heart and squeezes until you cry (with joy for once). Note: I also listened to the audiobook, narrated by Lin Manuel Miranda (of Hamilton fame), I would highly recommend it.

3 thoughts on “March Wrap-up: Books, Writing and a Trip to Spain”