Comic Con-undrum: The Anxiety-Filled Dilemma of Costume or No Costume & Other Events at My First Ever Comic Con

It started with tattoos…And ended with Deadpool glaring at me.

Actually, let me back up. It started with a little blip on my Facebook page. “Fairfax comic con” it read.

Fairfax comic con? I thought. Never heard of it before. I don’t want to go to that, right?

The preternatural predictive powers of Facebook boggle me…It knows what I want even before I know. [Insert scary music.]

My not-so-little suburb outside DC boasts sprawling neighborhoods, green lawns and even a university. But when I think of Fairfax, I don’t think of a place filled with people secretly wishing they could dress up like fantasy characters and wander around an expo center devouring comic books. Not offense Fairfax, but much of the time this place feels a bit too uptight for the quirky culture of a Comic Con crowd.

Apparently, I’m wrong. (Not the first or the last time.)

So wrong, in fact, this first-ever Fairfax Comic Con was crowdfunded! (Clearly, the people of Fairfax really wanted this to happen!)

And, so wrong, in fact, I never realized I, too, secretly wanted to dress up like a fantasy character and wander around an expo center watching people battle with lightsabers and geeking out over Funko Pop! figurines. I’d never been to a comic con event before. But I, suddenly, inexplicably needed to go as if my life depended on it.

Which brings me back to the tattoos. 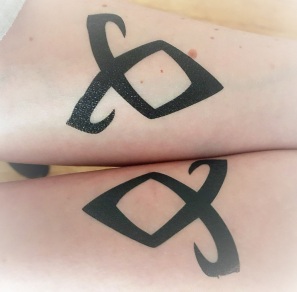 Generally, it’s frowned upon to cover your 13- year-old daughter in large black swirling tattoos. But I’ve never been one for convention. And, well, they are only temporary.

My daughter and I share a mild obsession with the Shadowhunters/Mortal Instruments canon. (OK, hers is mild. Mine borders on crazy.)

As water dripped down my arm and my daughter peeled back the white paper on our matching Shadowhunters angelic runes, I wondered if I would be the only 40-year-old person in costume at this event. Would my daughter and I be the only people in a costume period?

This was the first ever Fairfax Comic Con. People have probably never even heard of the City or county of Fairfax. It certainly isn’t New York or San Diego. Would this be some sort of Carrie moment where I showed up in a costume (albeit a relatively tame one by comic con standards) and everyone else is in t-shirts and shorts laughing at me?

Hiding my fear, I piled on more tattoos on my skin. The best way to deal with anxiety is to cover it up, literally. (Just kidding. You should face your fears everyone. It’s healthy.)

Butterflies flapping, anxiety rising, and three teenagers chattering in the backseat, we drew up to the expo center. In front of the nondescript cement building, stood a woman in a poufy pink dress and a tiny crown. Long blond synthetic hair flowed down her back. The teenagers in the car with me yelled out her character name.

At that moment, all anxiety evaporated. Someone in costume! These were my peeps. I was going to feel right at home!

We followed a miniature ghostbuster and his father through the swinging glass doors and slammed into the echoing sound of hundreds of voices bouncing from stall to stall. 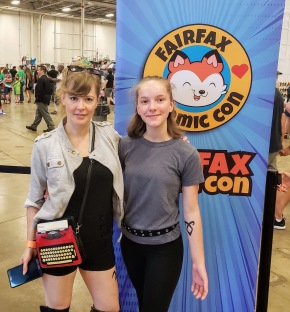 Inundated with colors and art and jewelry, and comic books, our group wandered down the aisles in a daze. Massive sensory overload turning us into temporary zombies.

I wasn’t sure what to expect. My exposure to comic cons are video clips from the New York and San Diego events, where celebrities and comic book authors sit on panels or pose for pictures with fans.

The Fairfax Comic Con definitely had these elements. Greg Grunberg, of Star Wars fame (who will always be Sean Blumberg from Felicity to me), chatted with fans. And there were other comic book writers and heroes, I was less familiar with, posing for pictures and signing books.

Visitors could put themselves inside a wealth of fantasy worlds via green screens and there was a costume contest. All of that felt very traditionally Comic Con.

But I also enjoyed the more local flavor of the event, such as the vendor where I fed my steampunk obsession for well over an hour and purchased this one-of-a-kind beauty.

And there was no shortage of vendors selling my favorite Funko Pop! figurines. I searched every, single stall for a Shadowhunter pop. (There were none. In fact, the event lacked in the Shadowhunter and Buffy swag. Note to organizers for next year!)

But I did find my daughter’s spirit animal. (Yes, her spirit animal is a person and he is Ron Swanson from Parks & Rec. Best. Spirit. Animal. Ever. IMO.)

My daughter also managed to track down a Buffy graphic novel, finally! (YAY)

As our teenagers ran off on their own, the adults floated through the stalls. I gravitated more toward the aberrations, stalls that seemed a bit out of place. For example, I bought a book of poetry. And, I donated to an organization called RPM Wildlife, which makes tiny mechanical wheeled contraptions for animals who can’t walk. (Moral: If you make me cry over your kindness to animals, you get my money.)

It was an odd mishmash of classic Comic Con, local artisans and just randomness. It felt, very, somehow, Fairfax. Perhaps this town is more interesting than I realized.

Plus, it had Deadpool chatting with Princess Smoopledorf. (And yes he pointed those fake guns at me.) A bit surreal. I guess I didn’t have to worry about the whole costume thing.

Sadly, fake Shadowhunter runes do not keep you from having to do laundry. (Those tattoos should come with a warning label: The enclosed items do not turn you into actual Shadowhunter and get you out of chores.) Eventually, my family and I returned home to face the Sunday night music.

As I folded shirts and hung towels, memories of Pop! figurines and Deadpool danced in my head.

Someday, I will find the elusive Shadowhunters Pop!… Maybe in October at the NY Comic Con. Because now we’re hooked. We had a little taste of the heady fantastical world of magical art and nylon costumes. And my family and I want more…

For now, I have the National Book Festival to look forward to, which is this weekend in DC. Holding in my excitement for that event is like holding my breath for more than 5 seconds. Impossible! (I have terrible lung capacity. Can you say out of shape writer?)

Stay tuned…for the next bookish adventure… 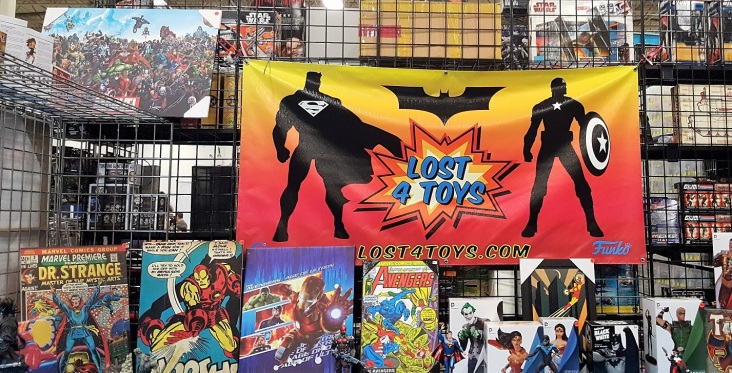 6 thoughts on “Comic Con-undrum: The Anxiety-Filled Dilemma of Costume or No Costume & Other Events at My First Ever Comic Con”