You know you’re lucky when you have a best friend who will spend half of a vacation day wandering around a library with you in Singapore.

My own family wouldn’t even do this. My husband would speed walk up the escalators, through the exhibits, then go sit on a bench and read his phone. To be fair, my husband’s only type of walking is speed walking thanks to his NYC roots. To maintain pace with his ambulatory-challenged tiny wife, he must take uncomfortable half-steps. As for my teenage daughter, she might encourage a visit to a library, but after a while, her shoulders would droop, she’d give a few shrugs and finally admit she’s bored. (Sorry family, this is just true. See every museum we have ever been to ever as evidence.) Watching my family slug through an activity sucks all the fun out of it.

BUT, my best friend, she’s different. While not nearly as book-crazed as me, she appreciates all things literary and, like me, can find the fun in pretty much anything. I think she may have even been the one to suggest we go to the library! I can’t remember, those kinds of details are not the kind that stick in my mind. The details that stuck with me about that day were the following.

It was hot (shocker!). The city-state of Singapore sits right on the edge of the equator so hot is a mainstay.

The prior day we spent time braving the heat and exploring several of Singapore’s unique neighborhoods in search of bookstores and a gluten-free bakery. We found both in the quaint neighborhood of Tiong Bahru, where we visited the children’s book focused Woods in the Books and the more traditional indie bookstore, BooksActually, which I found a rather inspirational place.

What made BooksActually so special wasn’t just the book vending machine out front or the adorable cat or the fact it felt like someone spread a sepia-toned fog across the entire store, it was that the store sold on both popular and obscure literature from the region. And, even more amazingly, it also served as a publisher. Along one whole wall ran an entire section of books stamped with the publishing name of BooksActually.

While it felt like five minutes to me, we probably spent over an hour in the bookstore as I tried to distill down my purchases to something I could manage to fit in my suitcase. I finally settled on a mix of BooksActually publications and other books I’d never heard of before. 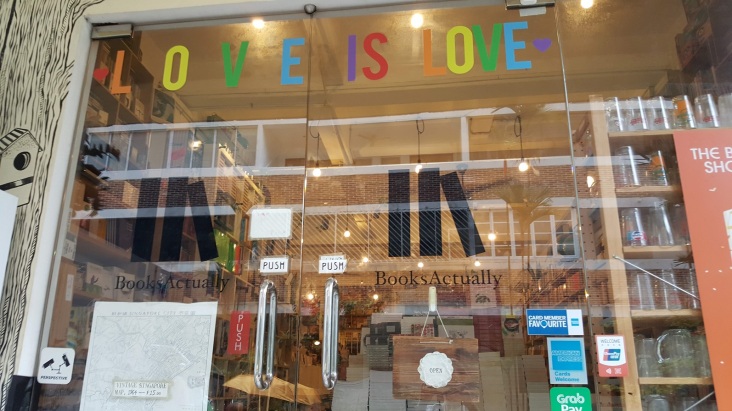 Afterward, we wound down the narrow streets to Tiann’s Bakery where I indulged in waffles with chocolate and kaya gelato. (Kaya is typically described as a coconut jam and spread on the Singapore favorite, Kaya Toast. Since gluten-free kaya toast isn’t easy to find, this was my chance to try the Singapore sweet for myself! It was delicious!)

The next day we continued our literary adventures and visited the Singapore National Library, a soaring tower of glass opening up to the Singapore skyline. This was no mothball, carpeted library. The modern architecture seemed to reflect an understanding that literature lifts us into the clouds. 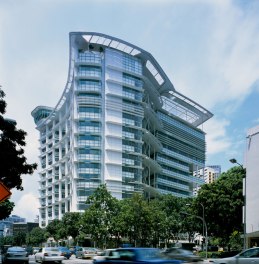 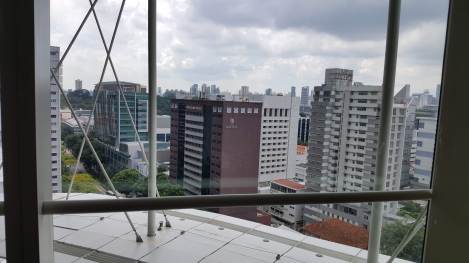 Winding up the escalator we first came upon an exhibit, one of many we’d find enclosed in the glass walls. It embodied what would become one of my favorite things about Singapore: diversity. The exhibit covered the history of literature across cultures and was written in numerous languages. My best friend and I learned about writers we’ve never heard of and sometimes simply stared at the beauty of languages we couldn’t read. 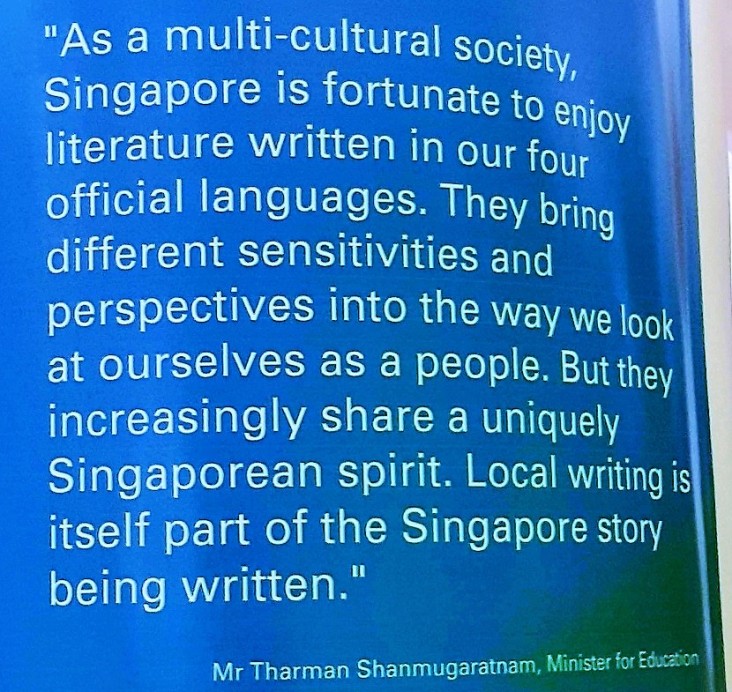 Toward the upper levels of the library, we found another engrossing exhibit, this one on the history of advertising in Singapore, starting in the earliest days of snake oil salesman style medicine and moving into modern day. The exhibit juxtaposed the uniqueness of Singapore with the universality of certain changes in global history, such as the impact of the introduction of the car, or music or television. 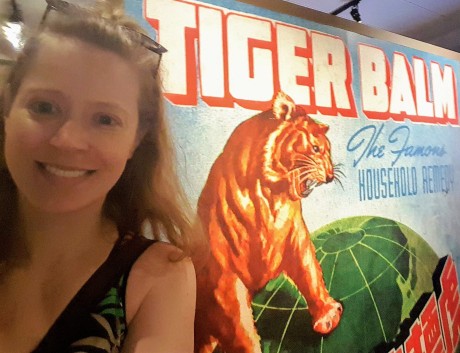 In Singapore, you can always count on a respite of green space no matter where you are. The verdant lushness of the equatorial city-state crops up even in the most over-developed, high-tech and bustling areas. The library is no exception. Suddenly tired of the hum of air conditioning and missing the squeeze of the hot, humid air, we stopped outside to take in the views and sit among the beautiful greenery of one of the libraries terrace gardens. 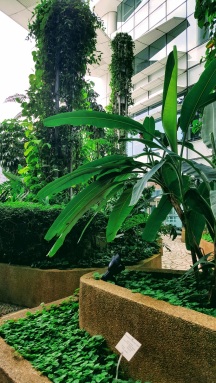 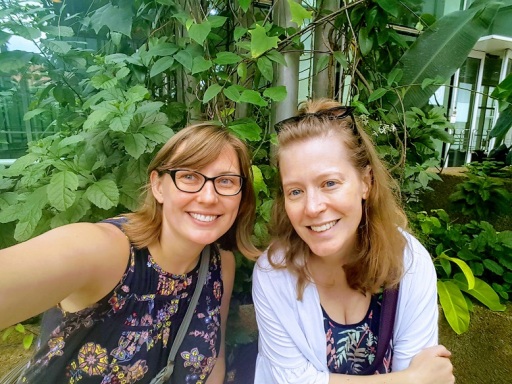 For our last library adventure, we went in search of a rumor, a fable about glass enclosures that bubble out from the side of the highest part of the library. A transparent cubby where readers can climb inside, ensconced in glass, and cozy up as if floating in the sky with a book. (Not that I would ever do this because I am deathly afraid of heights, but I’d be more than happy to take a picture of my much braver best friend doing it!) For some reason, we decided it must be on the mystical top floor. A floor we knew existed from the map but was not accessible via the main library elevators.

Taking the alternative option, the handy escalators, we tried another route, only to find the top level roped off. Refusing to give up, we wandered around the level below, searching for a hidden stairwell and stumbled upon instead a small, seemingly secret elevator in an area that appeared decisively off-limits to public visitors. Unfortunately, no amount of button pressing could get the elevator to stop on our floor or take us up to the next.

Sadly, we never found our literary El Dorado, but we had fun trying. We ended the day, our last together in Singapore, sitting under an umbrella and sipping cocktails at a converted convent in a wonderful rainstorm. Only in Singapore…. 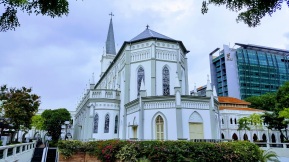 After that, my best friend boarded a plane and I sat alone poolside, planning a trip to a far off, remote island supposedly lost to time….but that is for another blog….