Oscars and Literature: Guess Which Nominated Movies are Based on Books?

I love movies almost as much as I love books. And I love watching the Oscars – the actors, the stories, the dresses, the shoes! (I happen to be very fond of the controversial “shoe cam.”) I love the Oscars in all its opulent, glitzy, materialistic glory. And, for other reasons too. (#merylstreepforpresident) 😉

As much as I love movies, books still come first. Lucky for me, many movies are based on books. In fact, Meryl Streep was nominated for one of my favorite movies – Adaptation – which is based on a book about adapting a book. It’s just so perfectly literary I can’t even stand it.

However, I struggle to see many Oscar movies before the Oscars because I really prefer to read the book before I see the movie. It’s just better that way. When you see the movie and then read the book, something gets lost. I’m learning that lesson again right now as I’m reading book two of the Harry Potter series – The Chamber of Secrets – for the first time. Even though I saw the movies many years ago, having seen them before reading the books takes a bit of the “rush” out of the reading experience. I don’t feel that “what’s going to happen next” page-turning excitement the way I probably would if I didn’t have any idea how the story would progress.

Therefore, I’m always interested to know what movies have books as their basis. If you are too, here is a list of the movies nominated for Oscars that are based on published books and novels. (I’ve excluded short stories, screenplays, plays and comics. I’m also not including documentaries.)

Nomination: Actress in a leading role

What’s it about: Psychological thriller about a woman who plots revenge after being brutally attacked.

Reason for the ranking: This has to be last for practical reasons. I can’t find an English translation of this book and my french is pretty rusty. So, I’ll have to re-evaluate if an English translation pops up anywhere. Although, women being brutalized isn’t something I generally enjoy reading about or watching. 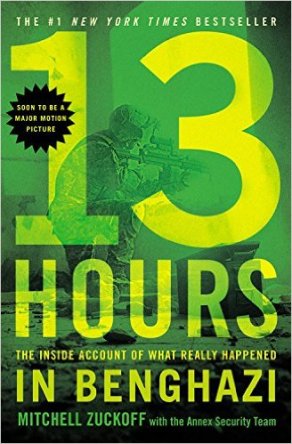 What’s it about: 13 HOURS presents, for the first time ever, the true account of the events of September 11, 2012, when terrorists attacked the US State Department Special Mission Compound and a nearby CIA station called the Annex in Benghazi, Libya. A team of six American security operators fought to repel the attackers and protect the Americans stationed there.

Reason for the ranking: Maybe it’s just me, but I’m really sick of hearing the word Benghazi. I’m going to need at least another few years before I have any interest in this.

What it’s about: Best known for the ‘Mowgli’ stories, Rudyard Kipling’s The Jungle Book expertly interweaves myth, morals, adventure and powerful storytelling. Set in Central India, Mowgli is raised by a pack of wolves. Along the way he encounters memorable characters such as the foreboding tiger Shere Kahn, Bagheera the panther and Baloo the bear. Including other stories such as that of Rikki-Tikki-Tavi, a heroic mongoose and Toomai, a young elephant handler, Kipling’s fables remain as popular today as they ever were.

Reason for ranking: I can’t believe it but I think that I’ve never read this book. I watched the Disney cartoon version a million times as a kid, but never picked up the book. While I’d love to rectify this oversight, it’s just not as important to do so for me than to read some of the other books that have been turned into movies.

What it’s about: At only five years old, Saroo Brierley got lost on a train in India. Unable to read or write or recall the name of his hometown or even his own last name, he survived alone for weeks on the rough streets of Calcutta before ultimately being transferred to an agency and adopted by a couple in Australia.

Despite his gratitude, Brierley always wondered about his origins. Eventually, with the advent of Google Earth, he had the opportunity to look for the needle in a haystack he once called home, and pore over satellite images for landmarks he might recognize or mathematical equations that might further narrow down the labyrinthine map of India. One day, after years of searching, he miraculously found what he was looking for and set off to find his family.

Reason for ranking: While I find this story compelling and interesting, I really struggle with stories about children going through difficult times. (I threw the book The Road across the room before even getting out of Chapter 1). It’s hard for me even if it’s a small part of the story and in the end everything turns out OK. It’s even harder to read when they’re true. Maybe it’s because I’m a mom. I feel the same way about books about animals, which is why I’ve never read Old Yeller or books of that nature! Still this seems like an amazing story, so I think want to try to force myself to read it in the near future.

What it’s about: Seventeenth-century Japan: Two Portuguese Jesuit priests travel to a country hostile to their religion, where feudal lords force the faithful to publicly renounce their beliefs. Eventually captured and forced to watch their Japanese Christian brothers lay down their lives for their faith, the priests bear witness to unimaginable cruelties that test their own beliefs. Shusaku Endo is one of the most celebrated and well-known Japanese fiction writers of the twentieth century, and Silence is widely considered to be his great masterpiece.

Reason for the ranking: I am interested in reading this, even though it’s not really my genre of a book. I do like to move outside my comfort zone. That said, I really don’t enjoy violence, so I’d be perfectly fine skipping the movie. Even if I could endure reading about violence, I have a lot of trouble watching it, even fake violence in movies.

Nomination:  Actor in a Supporting Role

What it’s about: Fifteen years ago, Susan Morrow left her first husband, Edward Sheffield, an unpublished writer. Now, she’s enduring middle class suburbia as a doctor’s wife, when out of the blue she receives a package containing the manuscript of her ex-husband’s first novel. He writes asking her to read the book; she was always his best critic, he says.

As Susan reads, she is drawn into the fictional life of Tony Hastings, a math professor driving his family to their summer house in Maine. And as we read with her, we too become lost in Sheffield’s thriller. As the Hastings’ ordinary, civilized lives are disastrously, violently sent off course, Susan is plunged back into the past, forced to confront the darkness that inhabits her, and driven to name the fear that gnaws at her future and will change her life.

Reason for ranking: I’m intrigued by the premise. (I enjoy any book or move or show about writers).  I also saw a clip of Amy Adams in this role and it really made me want to see the movie. So, I need to read this book. But, just not before…

Book: Highest Duty: My Search for What Really Matters

What it’s about: On January 15, 2009, the world witnessed a remarkable emergency landing when Captain “Sully” Sullenberger skillfully glided US Airways Flight 1549 onto the Hudson River, saving the lives of all 155 passengers and crew. His cool actions not only averted tragedy but made him a hero and an inspiration worldwide.

Reason for ranking: Firstly, I love Tom Hanks. If he is in a movie I want to see it. I mean really, when’s the last time the guy did a bad movie? I mean a real stinker? I can’t even remember. He’s amazing in everything he does. And don’t you totally wish he was your friend? He seems so awesome. OK, done gushing now. I am actually very interested in this story of bravery and its consequences. I’d really like to read this book and then see how well Tom Hanks does at embodying the man I’ll get to know from the pages. I’ll read this soon, hopefully.

What it’s about: Meet Ove. He’s a curmudgeon—the kind of man who points at people he dislikes as if they were burglars caught outside his bedroom window. He has staunch principles, strict routines, and a short fuse. People call him “the bitter neighbor from hell.” But must Ove be bitter just because he doesn’t walk around with a smile plastered to his face all the time?

Reason for ranking: I recently read another book by this author and really enjoyed it. After reading it, I put this book on my “to read” list. So I need to get to it ASAP. But, not before…

Book: Hidden Figures: The American Dream and the Untold Story of the Black Women Mathematicians Who Helped Win the Space Race

What it’s about: Before John Glenn orbited the earth, or Neil Armstrong walked on the moon, a group of dedicated female mathematicians known as “human computers” used pencils, slide rules and adding machines to calculate the numbers that would launch rockets, and astronauts, into space.

Starting in World War II and moving through to the Cold War, the Civil Rights Movement and the Space Race, Hidden Figures follows the interwoven accounts of Dorothy Vaughan, Mary Jackson, Katherine Johnson and Christine Darden, four African American women who participated in some of NASA’s greatest successes. It chronicles their careers over nearly three decades they faced challenges, forged alliances and used their intellect to change their own lives, and their country’s future.

Reason for ranking: A book about amazing women overcoming prejudice and showing the world women are smart. Yes, please, thank you. I need to read this immediately and then go see the movie. This is the kind of book I wish I read before my college counselor told me freshman year I shouldn’t take astronomy because girls struggle with the course. (I got an A in astronomy, by the way, and never went back to that counselor.)

3 thoughts on “Oscars and Literature: Guess Which Nominated Movies are Based on Books?”