Scary Story Time: Ghost Haunting and Hunting in Colonial Williamsburg While Traveling with The Travelers 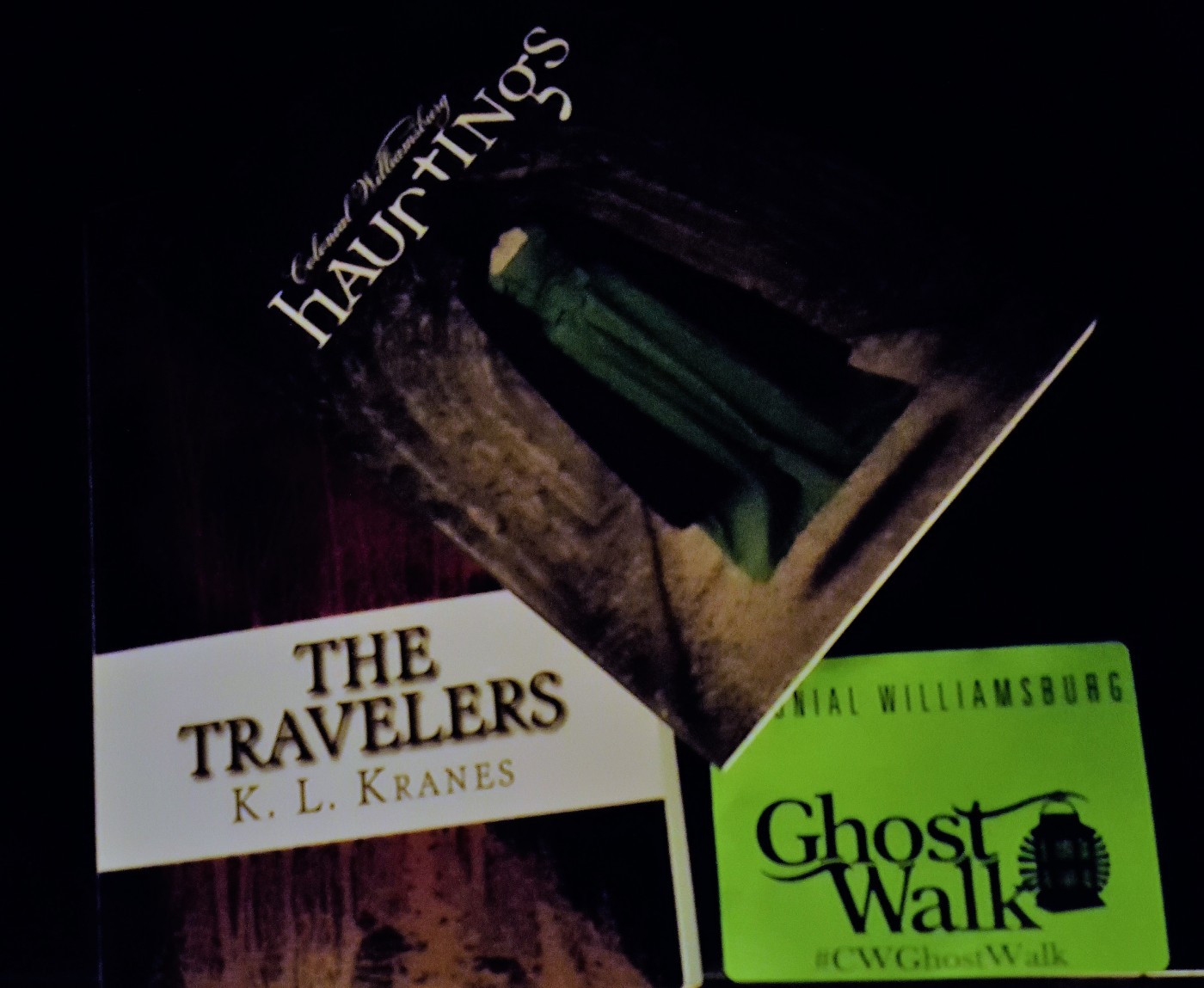 When visiting Colonial Williamsburg, you talk a lot about dead people.

You even meet them on the street. It is considered a town of living history, after all, and it’s one that tells great stories.

As an author (The Travelers, Saguaro Books), I am a consumer of stories in any form. They’re not just entertainment, they’re also inspiration. And I love a good scary story. 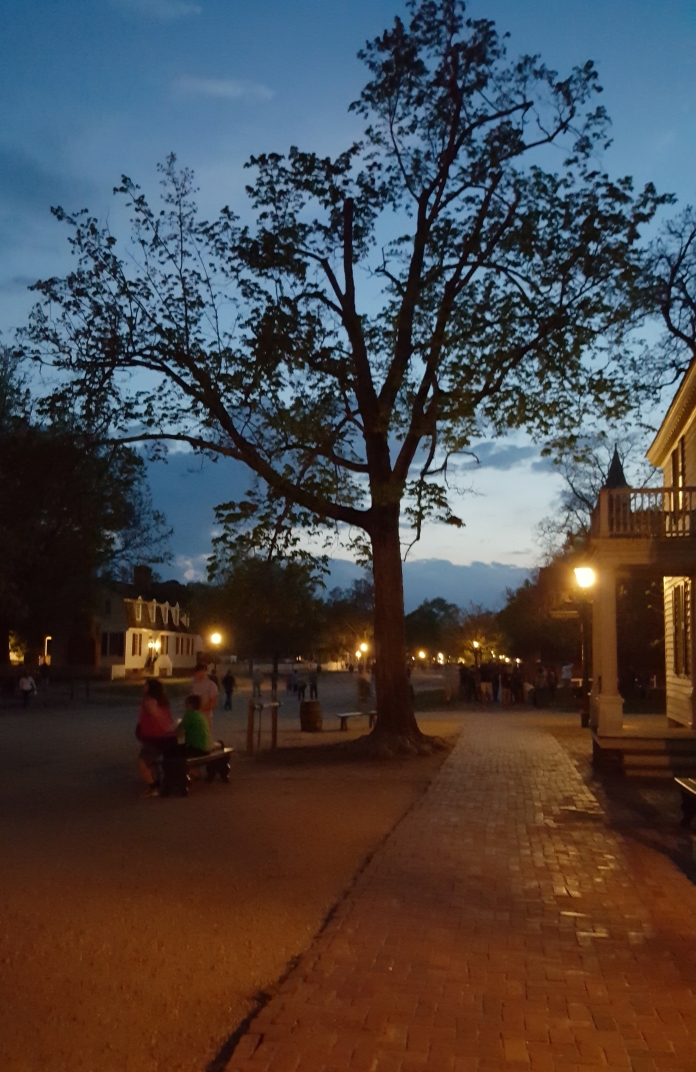 But, the dead people you hear about or sometimes even meet on the streets of Colonial Williamsburg aren’t ghosts. They are just historical figures and re-enactors.  (Is that a word? It is now.)

To see real ghosts you have to go ghost hunting. I don’t like to hunt anything. So, I opted for a much less violent-sounding ghost tour. The official one for Williamsburg actually.

(Side note: If you’re ever in Williamsburg, you should take the tour, even if you’ve heard or read all the stories. There is just something about someone describing scenes of terror by candlelight. It’s like when people tell a scary story over a campfire. Even if you’ve heard it before, you still jump when the storyteller screams that the guy is in the back seat at the end.) 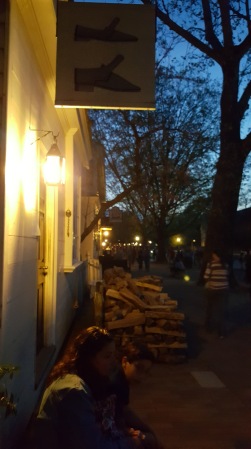 We waited by the Weavers’ store as shadows spread until they covered the ground. (I thought this location appropriate given our tour guide was about to weave us some haunting tales.)

My daughter bounced excitedly, waiting for the tour to start. This was her idea. I worried she might get scared. She’s only 11-years-old and until about two months ago still believed in unicorns. She has a pretty active imagination. But she insisted she wanted to go on this tour.

The man collecting tickets handed us large, bright green stickers announcing we were part of the tour. We slapped them on our clothes. Soon, our tour guide, Margie, authentic flickering lantern in hand, led us down the brick sidewalks to our first destination.

Margie, who has a flare for the telling of stories, began with a tale of a crying baby who tricked workers into following its call through every room of the house followed by the story of a very polite apparition that whispered greetings in people’s ears. They were interesting, cute even. But not terrifying.

Still, both stories were well told by Margie, who kept me hooked as the worker who closed up the building felt a presence sneaking up behind him at the top of the stairs. My daughter, the best gauge of the scariness level of the tale, was unfazed. She smiled and hopped along to our next location. 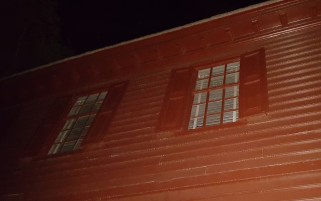 This is where things got serious. At the Getty house, our guide had just been warming us up. On the front stoop of the Randolph House, one of the oldest Williamsburg properties, Margie gave a much more harrowing account.

Margie explained that although ownership changed hands several times, the Randolph House eventually became part of the official Colonial Williamsburg experience for visitors, which means it’s under the purview of security guards who must check it each night.

One night the guard performed his final check of the house. Per the normal routine, he went down into the basement. As he reached the bottom of the stairs the door to the basement slammed shut. The guard pointed his flashlight up the stairs to investigate and it’s light flickered out. Remaining calm, he tried to walk back up the stairs. But as he lifted his foot he felt something holding it back. He couldn’t move.

He remembered he had a radio and called to a fellow security guard for help. For several long minutes he remained pinned to the floor in the darkness, waiting to be rescued, not knowing what else lurked in the basement with him.

After the visit to the Randolph house, my daughter seemed a little less buoyant and carefree. She stuck a little closer to me and my husband.

Next, Margie lead us to the backyard of Market Square Tavern, where eerie trees with thick knotty branches spread out into the sky like bones from a skeleton.

Beneath these trees Margie told a story of an old Church that had since been torn down but served as a hospital for Confederate soldiers during the Civil War. She talked of a mad doctor who stored body parts and a mass grave where many soldiers were buried.

One night, the tavern, which still has overnight guests and once housed Jefferson (some claim to have seen his ghost there) woke to find some very miffed people under its roof.

These guests all called down to the front desk complaining of the same thing – during the night they were woken by sounds of digging. They’d all assumed some sort of construction. Except there was no construction or digging nearby.

One couple called, not to complain, but to report that in the middle of the night they’d also been woken by the digging and looked out their window to the field across the street and saw a woman in a long dress holding a flower. Margie said that field was the site of the mass grave and that each soldier was buried with a flower. The couple claimed the woman leaned down and placed the flower on the ground. Then she disappeared.

With my daughter close by, we walked silently to the next stop on the tour. 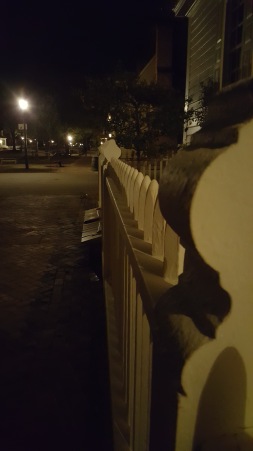 Margie ended the tour with two stories about Mr. Prentis, who, if his ghost is any representation of who he was in real life, was kind of a jerk.

By this point, my daughter was pale, even by candlelight standards. However, I found this part of the tour kind of funny because after Margie told us about how Mr. Prentis’ ghost apparently flung a chess boards at a pair of visitors who dared to criticize the store he once owned, she took us to his house and began another story about a guide named Curtis.

My family and I were already familiar with Ghost Guide Curtis. He’d even become the butt of several of our jokes. Why? How?

Well, we did a little research on our ghost tour before we arrived. On Yelp, Curtis got some not so stellar reviews. In fact, when we learned Margie would be our guide for the evening, I joked, “Thank goodness it’s not Curtis.” (Although, I think I called him Calvin. I’m terrible with names.) Several other Curtis jokes were bantered around by my family as the tour progressed.

So, when Margie explained that the house on the final stop of our tour also once belonged to Mr. Prentis and was once rented by none other than Curtis, my husband and I chuckled. Turns out Crabby Mr. Prentis was even less fond of Curtis than the Yelp reviewers because, according to Margie’s story, his ghostly form managed to somehow slap Curtis twice and glared at him from the window of the house. (I told you Mr. Prentis sounds like kind of a jerk.)

Of course while my husband and I found this story funny, my daughter had gone from slightly anxious to terrified. She was not amused.

As the tour concluded, I stopped to take a picture of the plaque at the foot of the front stoop of Mr. Prentis’ house. My daughter was not happy about that and told me to hurry up. She wanted to rush back to the car before Williamsburg became completely deserted.

I’m not sure I’ve ever seen her walk so fast.

Margie definitely knew how to weave a haunting tale.