Earth Day Thoughts: Science Needs a March? When Did This Happen?

Yesterday I went to the March for Science in DC, which happened to be, appropriately, on Earth Day. It was a day filled with great people, great posters and a sense of purpose. It had that same hopefulness of the Women’s March. Even the rain couldn’t dampen that warming feeling – together, we can change this world for the better.

Still, I struggle with the fact that I just went to a march for science. Science! Really? This is what we’ve come to? I mean #scienceisreal is a hashtag that exists. People feel the need to write this. I’m in disbelief. 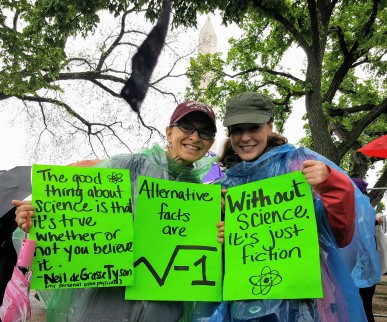 But, First…A Quick History Lesson on Earth Day – It’s Going to Shock You

Before we talk about the March for Science, let’s take a quick look at Earth Day.

Large-scale protests to support the scientifically-based concepts of conservationism and the earth didn’t just suddenly start on November 8, 2016. Earth Day was founded on April 22 in 1970 when millions of people protested the negative impacts of industrial development.

On April 22, 1970, 20 million Americans took to the streets, parks, and auditoriums to demonstrate for a healthy, sustainable environment in massive coast-to-coast rallies. Thousands of colleges and universities organized protests against the deterioration of the environment.

Not so shocking? This will be.

Conservationism and environmentalism weren’t always just a “liberal thing” (nor should they be today.)

None other than Republican President Richard Nixon. The agency was even established the same year of the first Earth Day. The evolution of the Republican slide toward being filled with climate change deniers is a long road filled with manipulation and gas and oil money I won’t tackle right now.

But, it is interesting to note that when Earth Day was founded, Republicans supported it and supported conserving the earth’s resources. So much can change in 30+ years…for the worse. We can’t afford to take 30 years to change it back for the better.

Why a Science March on Earth Day?

And, thus, from this attack on scientists because what they say is inconvenient to people, particularly big oil and gas companies, we now have a March for Science on Earth day.

It’s Even Bigger than Climate Change, Even Basic Science and Logic is Under Attack

A bunch of NBA players with zero science degrees claim the world is flat and suddenly this is a discussion?

Unfortunately, they aren’t the first ones in modern times to question this seemingly super basic understanding of science.

Regardless, it is a basic fact that has been realized for centuries. In fact Pythagoras, back in the 6th century B.C., said the world was round. And by the time Columbus sailed to America, sailors had all figured this out by observing ships, which disappeared over the horizon with the bottom first and then the mast the last to be sighted. But, apparently there are people 500+ years later that can’t grasp that concept. (Soapbox side note: I can’t believe I have to justify that the world is not flat!)

It’s a symptom of a much larger problem. People don’t get science.

Because of this science skepticism, yesterday I felt compelled to go attend a march for science. Seriously? We need to defend science, like the principle on which all life exists in the universe?

What on earth is happening to the world? (Pun intended.) These people pretty much summed up how I feel with their march posters.

This is my big issue with people who question science, such as climate change deniers and anti-vaccination supporters, and people who think the world is flat:

It’s just arrogance mixed with ignorance. If you’re a seasoned plumber and a climate change scientists who’s never seen the inner-workings of a house starts telling you how to fix a broken pipe, how would you feel about that? That’s essentially what people who ignore the consensus of science are doing.

Therefore, I have a proposal. I think all the people who don’t believe in science, shouldn’t get to use it.

I’m using hyperbole to make a point. I obviously don’t think people should stop using cars or soap, nor do I think science should be followed blindly.

Science is About Questions

This doesn’t mean people shouldn’t question scientific findings. But those questions should be based in thoughtfulness and not ignorance or inconvenience or because some talking head on TV told you it’s not true.

In fact, science itself is based in questions. You create a hypothesis. You test that hypothesis. And then you re-test it over and over again. Different people test it. And that’s how you gain scientific consensus, the ultimate goal of scientific discovery. That’s why when scientists say there is scientific consensus on something, you should pay attention. Scientists, unlike most people, are methodical. They don’t make claims lightly.

Here is a great Ted Talk by Harvard Professor Naomi Oreskes on the scientific method I found very enlightening.

Science is Hard and Uncertain

I think much of the frustration with science stems from the fact that it’s complicated. I mean, honestly, I had to have someone explain this sign to me. It’s a great sign, once I found out what it meant.

And I’ve argued that the recent election in the US is a pretty good indicator that many people don’t like things that are complicated. They want simple.

This is the problem. Science is not simple and the fact that it’s based in questioning and testing, means it’s continually evolving. It’s not a flaw, that’s what makes it science.

It’s continued discovery. It’s evolution in thought. It’s learning. Without it, you wouldn’t be on the internet right now reading this.

Great March for Science sign that illustrates this point?

Got Plague? Me either. Thanks science!

How Do We Stop this Attack on Science?

This is my cue to say: books! And books will help. Part of stopping this attack on science is getting educated. If you want to understand the nuances of science, I like this blog called It’s Okay to Be Smart that lists science books that are digestable for anyone by topic. 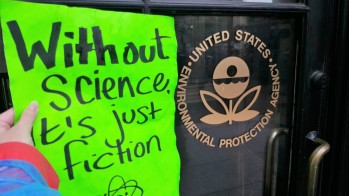 I also think it’s about changing the dialogue. Science shouldn’t be the villain. We need to tackle the real villain here and that’s ignorance and fear. Stop blaming science. If you need to blame something, you should be looking elsewhere.

To End on a Fun Note

How awesome are these brain hats?? They were everywhere at the march. So clever! They just need some pussy cat ears. 😉

2 thoughts on “Earth Day Thoughts: Science Needs a March? When Did This Happen?”