Friday Five: Analyzing 5 Books in My ‘To Be Read’ Pile I Just Keep Skipping Over

Book lovers all have a TBR, aka to be read, pile that is either a real stack of books in their house or a list in their kindle cue or on Goodreads. I have all three. I have more books then I will probably ever be able to read unless I decide to stop working, eating and sleeping for the rest of my life. That doesn’t mean I won’t try.

That said, I have books that have been sitting in my TBR for a long time. They keep moving down, down, down in the pile. I’ll notice them again and think I should read them, but for some reason I just don’t.

Here are 5 books that have been in my TBR for an embarrassingly long time. Clearly these spoke to me at some point. But so did a bright red, ruffled jumper that’s still sitting in my closet unworn.

Time to analyze my motivation for not picking these up…

5. The Curious Incident of the Dog in the Night-Time by Mark Haddon

First, clearly I got past the dog-issue here because I bought this book. It’s very upfront about the dog death. Right there on the back cover it explains, Christopher John Francis Boone knows all the countries of the world and their capitals and every prime number up to 7,057. He relates well to animals but has no understanding of human emotions. He cannot stand to be touched. And he detests the color yellow. This improbable story of Christopher’s quest to investigate the suspicious death of a neighborhood dog makes for one of the most captivating, unusual, and widely heralded novels in recent years.

I took the small step of actually purchasing the book, despite my resistance to books about animal deaths. (I don’t even like spiders and Charlotte’s Web would still probably make me cry like a baby if I read it today.) Those kinds of books are generally a non-starter for me. Although, if I can manage to read this one, it will check a box in my 2017 reading challenge – read a book in a topic/genre you usually avoid. This would work. Maybe that will be enough motivation for me to do it.

4. Ready Player One by Earnst Cline

This book is particularly embarrassing because I bought well over a year ago, probably more, and my husband has even read it now and I have not. (Sidebar: My husband is not nearly the voracious reader I am. Once upon a time he actually read more than me. But somehow his love of reading was drowned by the sheer mass of the Game of Thrones book series and he’s never really been able to recover. That or he needs to stop playing poker on his phone.) Regardless, the fact that my book challenged husband has lapped me here is akin to Michael Phelps losing the 100 meter freestyle to a golden retriever. The golden retriever is cute, but he shouldn’t win.

So why haven’t I picked this book up? It’s scifi, a genre I enjoy. The premise sounds fascinating. In the year 2044, reality is an ugly place. The only time teenage Wade Watts really feels alive is when he’s jacked into the virtual utopia known as the OASIS. Wade’s devoted his life to studying the puzzles hidden within this world’s digital confines–puzzles that are based on their creator’s obsession with the pop culture of decades past and that promise massive power and fortune to whoever can unlock them.

The only thing I can figure out is I may have become less interested based on something my husband said. He liked the book, but he noted that it heavily references the 1980s, a decade that was his formative years, but not mine. My formative years were in the 90s. Maybe I’m worried I won’t relate to this book. Maybe that’s a silly reason. I’m not sure. Perhaps I need to re-watch some John Hughes movies and get myself into the 80s spirit.

3. The Metamorphosis by Franz Kafka

So, my reluctance to read this one is likely not so shocking to many people. However, for me, it’s unusual that I haven’t read it yet. There are certain classic books that I feel I should read to be a well rounded reader. Typically when I decide to read one, I do. (Or at least try . Let’s not talk about Ulysses). But, generally, I’m successful in setting my mind to read a classic and at least attempting it.

It’s possible the problem here is that I’m still trudging through Dante’s Inferno, and the idea of reading two daunting classics is keeping me from starting Metamorphosis. That said, Metamorphosis seems like the less daunting read of the two. Plus if it’s been referenced in the Gilmore Girls I feel a duty to read it. Perhaps I just need to abandon Dante and move on to the traveling salesman, Gregor Samsa, waking to find himself transformed into an insect. I can always come back to Dante later. Oy with the poodles already. 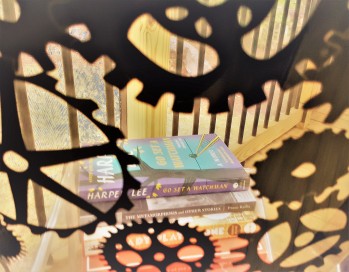 This is a conflict within myself that I can name. I really want to read this book and I really don’t want to read this book. It’s Harper Lee. I mean, let me say that again, it’s Harper Lee. The woman who not only brought Scout and Atticus Fitch into our lives, but took on racial injustices in Southern American through her book in a time when that was extremely unpopular. She’s an icon. She’s an amazing writer.

What if Go Set a Watchman doesn’t live up to To Kill a Mockingbird? In fact, it’s not even an “if.” Although it’s a sequel of sorts, many view Watchman as more of a first draft of Mockingbird, as it was written first and many thought Lee never wanted it published. The book again follows Scout, now 26-years-old, as she returns to her hometown in Alabama and learns disturbing truths about her close-knit family, the town, and the people dearest to her.

I may have read one-too-many reviews and analyses of this book to ever pick it up. Is it childish to not want to see characters I came to love, like Atticus, whose moral fiber is inspiring turn into something hateful and grotesque? I get enough of that in the real world.

Perhaps I need to view Watchman for what is, not a sequel, but Lee’s first attempt at Mockingbird, an alternative universe of sorts. That way both books can stand on their own without ruining the other. If I parse it out that way, maybe I will pick this up and read it.

This one may be the most confounding. On paper (pun intended), this book looks perfect for me. It’s a modern re-telling of Shakespear’s The Tempest in which Felix, an artistic director putting on the play The Tempest, is exiled after he’s betrayed and is haunted by memories of his beloved lost daughter, Miranda. Oh and he’s also plotting revenge.

It’s not just a re-telling of The Tempest. It’s The Tempest within The Tempest. It sounds amazing. That alone should have made me read this ages ago. But to make it even sweeter, it’s written by the wonderful writer Margaret Atwood, whose book A Handmaid’s Tale I loved so much that I was afraid to watch the Hulu series because I worried it would somehow ruin the book in retrospect.

So what’s my problem? Honestly, I’m still trying to figure that out. I want to read it. I’m excited to read it. I just haven’t picked it up yet.

I call this the BarTaco Effect. There is a restaurant near us called BarTaco. They have great food that checks all our boxes – vegetarian, gluten-free, delicious, fun/lively atmosphere. My husband loves the food every time we eat there. But we always have to drag him there. He never actually wants to go, despite always enjoying the meal more than most. He can’t explain why. And I can’t explain why I just won’t start reading Hag-Seed either. It doesn’t make sense.

Maybe I just need to open the darn book and start reading already.