My memory is like a weird block of Swiss cheese. Facts and data sink into the creamy surface and memories of my own experiences slip right through the holes into oblivion.  There’s probably some sort of official name for this affliction. Poor self memory syndrome. Self-preservation selective amnesia. (At least I forget most of the dumb stuff I do!)

Because of this, by the time I write my monthly blog wrap up, I have completely forgotten the whole month. (But I can give you a detailed description of the latest in advances in CRISPR.) Thank goodness for Goodreads, where I track my books, and my camera roll. When my family asks why I take so many pictures, now I can safely say it’s because otherwise I would remember nothing about my life! (‘Oh right, I did that!’ is a common thought in my head.)

What do Goodreads and my photo cloud collection tell me I did in September? Let’s start with blogs.

Now that I’ve revisited my blog posts and consulted my camera feed, I’ve found I did a lot of fun things this month!

The highlight of the festival (other than all the awesome authors)? I still had my temporary Shadowhunters tattoo from when I went to the Fairfax ComiCon a week before and a young girl saw it while passing me on the escalator. She said to her mom, “Wow! Look at her leg!” Yes! I’m cool!! (I’ll take it, even if it’s just a brief, fleeting moment.)

Rain at the beach isn’t ideal, especially when it’s a torrential downpour with lashing winds. Still, gray waves crashing on the shore bred calm serenity. Plus, I was lucky enough to be with one of my closest friends, celebrating her birthday. She didn’t complain once about the inordinate amount of time I spent in the comic book store AND the bookstore. Who says the beach is the best part about the beach?

Oh and this happened. (Yes, that’s an Uber car filled with colorful disco lights. I never want to travel without disco lights again!) 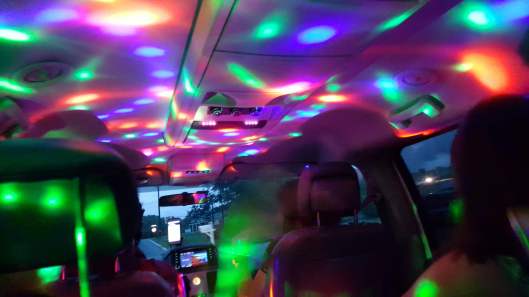 Since what seems like the beginning of time, my daughter dreamed of seeing the play. From the moment she first heard about not throwing away shots, she memorized every line and tried hard not to show how much it hurt when one-by-one all her other friends went to see it, but not her. Finally, she got her wish. We saw Hamilton at the Kennedy Center in September. And I’m not joking, this is the happiest I think I’ve ever seen her (the only exception might be the day we got our puppy.) And, yes, it does live up to the hype and was worth sitting in a virtual line to buy the tickets for 8+ hours. (I was number 14,721 and that was considered a good spot!) 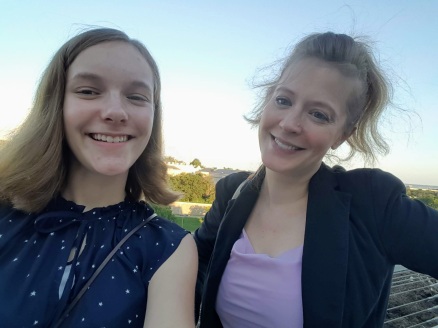 New York to Seattle: The End

To top off my month, I headed to New York for a day for a friend’s retirement party and then jaunted off to lovely Seattle, where I, of course, booked it over to a bookstore the moment I could! Nice way to end the month! 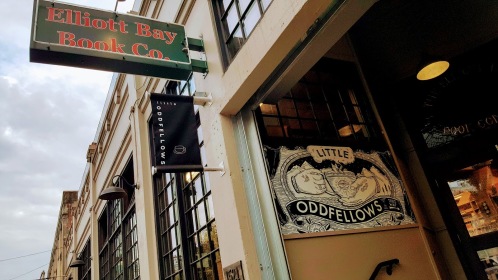 My actual book reading slowed in September. Mostly because I sorta, kinda got sucked into the comic books series/graphic novels called The Wicked + The Divine. Many nights I stayed up late reading about the impulsive, wayward Gods. Plus, I spent a significant amount of time at my local comic book store this month. Once I even got a peek into the Friday night world of D&D-like games and trading cards. It was….enlightening…

That said, I still managed to read some books without pictures. 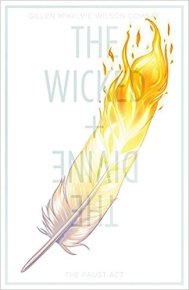 The Wicked + The Divine Volumes 2-6

Brief Review: Given my frequent visits to comic book stores in September, it’s safe to say I really enjoyed this comic book compiled into a graphic novel series. The guy at the comic book store threw out a bunch of terms to explain how comic books get compiled into graphic novels. None of which I was familiar with. But I appreciated that he pretended like I knew what he was talking about and did not try to man-splain it to me (because I really just wanted the books, not a lecture). 🙂 In summary, this series about gods who return to earth, are beloved, wreak havoc and then die 2 years later is compelling and weird and totally unique. While it can feel uneven at times, I’m hooked. I need volume 7 already!!!! 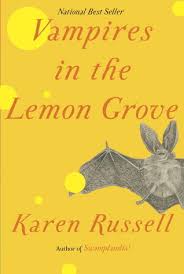 Vampires in the Lemon Grove by Karen Russell

Brief Review: As my book club pick for the month, I laid many hopes upon this book. I hoped my book club would like it. I hoped it would spawn interesting conversations. I hoped it wouldn’t be too weird. (Because I love weird and this book is WEIRD with all capital letters.) Even as a writer myself whose imagination has a wide berth, I kept thinking, “what kind of mind comes up with this stuff”? Vampires is an utterly original collection of short stories that can sometimes confuse, sometimes frustrate, but always make you think and wonder. My kind of book. I loved it.

We the Animals by Justin Torres

Brief Review: When I finished this book, I felt unsatisfied. The book launches immediately into the vivid world of three young brothers growing up in relative poverty with unstable parents, to put it kindly. The author describes their adolescent trajectory in all its horrifying and brutal detail. And then there’s the end, which felt disjointed from the rest of the book. A puzzle piece that didn’t quite fit. The dramatic turn almost felt unfair to the main characters. But maybe that’s the point. Life is unfair and random and justice is a wonderful, but completely impractical idea. OK. Maybe I liked this book more than I thought. 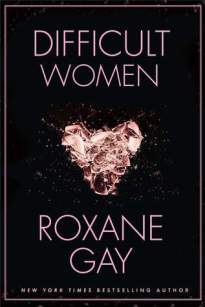 rief Review: During the National Book Festival, I watched an amusing interview with Roxanne Gay where she seemed to barely tolerate the interviewer. You could practically see the sweat beading on the man’s brow as she answered his rambling, self-indulgent questions with quick, profound responses. At the time, I’d just started reading Difficult Women, my first foray into her work, and didn’t quite realize the power of Gay, both on the page and in person. After the National Book Festival and finishing this book, I get it. This collection of shorts stories is challenging because it does not shy away from very troubling subjects. But through adversity and atrocity, Gay celebrates how women can triumph and find strength in themselves and each other. My favorite story is about a woman made of glass. The idea of everyone looking through her, thinking her fragile and not realizing how hard and strong glass can be was beautiful and poignant. All of the stories delve deep into the collective conscious and unconscious women share. In the same way women embraced the “nasty woman” moniker as a beacon of power and independence, I am proud to say, “I am a difficult woman.” Definitely a book worth reading.

Brief Review: Although I have recently started reading a lot of poetry again, I have never before read Neruda’s work. Part of me worried there would be some sort of “lost in translation” element. Rest assured, if anyone else worries about this, there is not. The title Love Poems is apt. It’s the kind of work you dream someone will read to you while you stare longingly from a window. It’s sensual and intimate. A true reflection of how words create and capture beauty all at once. In my edition, the Spanish version runs down the left side of the page and the English translation on the right. Having taken Spanish in high school, it was actually really interesting to try to read it in the native language and then read the English version. Even though my Spanish was never great and now calling it “rusty” is putting it nicely, I still gleaned the essence of his poems in Spanish. This was, of course, much more a testament to Neruda’s lyrical genius than to my understanding of Spanish. The way he writes almost transcends language. It’s kind of crazy, to put it not so poetically.

Between the World and Me by Ta-Nehisi Coates

Brief-ish Review (It’s hard to keep this one brief!): It almost feels like cheating. Coates did all the intellectual work and we get the reap the benefits of his insight. And there are insights aplenty in this book. In the beginning, I worried his blunt, almost nihilistic, viewpoint might be too difficult for a “glass half full” gal like me. But I strive to know the truth (like THE truth) and work hard to open my mind, so I was determined. And whether Coates cares or not, his book furthered those self-imposed goals.

As the story progresses, nihilism bends into practical philosophy. As much as Coates is focused on the reality of what is and not the hope of what could be, he is also a philosopher. Philosophy is the study of the fundamental nature of knowledge, reality, and existence, especially when considered as an academic discipline. And while Coates never graduated from college, his studies continued in libraries and through discussions and experience. There is so much to think about in this book, so much to consider. My copy is so bookmarked and underlined it looks like one of the texts I read in college.

Coates puts thought and words to the things I think I want to ignore, often because it hurts to face them. He doesn’t care. He digs down into our cores and exposes how roots in a history of subjugation continue to bloom new flowers. Every line is a punch of realism and truth. “The Dream thrives on generalization, on limiting the number of possible answers, on privileging immediate answers.” “…there was no golden era when evildoers did their business and loudly proclaimed it as such.”

This is a book I will read again and again. But what struck me most, selfishly, on the first read, was even though I am white, and it is impossible for me to ever truly understand what it is to be a black person in America, I am a woman. And this concept that your body is never really safe, that it’s viewed by many in power as expendable, hit me hard. I may feel that in a different way and for different reasons, but I feel that, every day. Coates didn’t write this book for me, though. He wrote it for his son. Like I said, I’m just the cheater reaping the benefits. My actual brief review: Read this book. No matter who you are.