Every month has its “thing.” January has New Years. February has love. April has showers. May has flowers.

And October’s “things” all go bump in the night.

Thanks to capping off the month with the sugar-coated scares of Halloween, the entire month seems devoted to all things creepy. And, this year, I embraced that wholeheartedly, starting with several of my blogs this month.

The month started out hot, in more ways than one with a book festival. This is where I met one of my favorite authors, Kwame Alexander, sort of. I gawked and barely sputtered out two works. Feel free to read about in the blog above. Despite my social ineptitude, the festival included crafts, a local bookseller and several very interesting author presentations.

Stonehenge and Unicorns (aka, a trip to a funny farm)

I love anything weird and, therefore, I am a big fan of the fall festival at the local Cox Farms. The entire festival, from rides to food to attractions is random and sooooo weird. Although maybe all farms keep foam-based life-sized replicas of Stonehenge on their property and I’m just out of touch.

I spent < 24 hours in Chicago, where I got to see this much of the city from by cab and hotel room.  😦 I will make it back someday and actually see the city!

A Night of Scares

To prepare for Halloween, we also visited The Madhatter’s House. This temporary local attraction boasts food trucks, a bar, paintball and a movie playing while you wait for your turn to go down the haunted trail and into an old prison.

The trail itself was 30 minutes of stepping through sticky mud while ghostly figures followed zombie-like down a winding path and creepy clowns leaped out from behind bushes. It ended in one terror-filled jaunt up to and through the old prison where arms reached out of cracks in makeshift walls, slanted to give a disjointed sensation. And, of course, we were chased by a guy with a chainsaw. Because what respectable haunted attraction doesn’t have a guy with a chainsaw?

It truly felt like a nightmare come alive. As ghouls jumped out, zombies chased, witches hexed, my daughter’s friend froze in terror. My daughter? She laughed. She found the whole thing rather funny. I’m not sure how I should feel about that…. Maybe I need to find a trail haunted by spiders. THAT she would find truly terrifying. Sadly, no pictures. This was a pre-trail pic of the girls where I made them look ghostly. Best I could do! 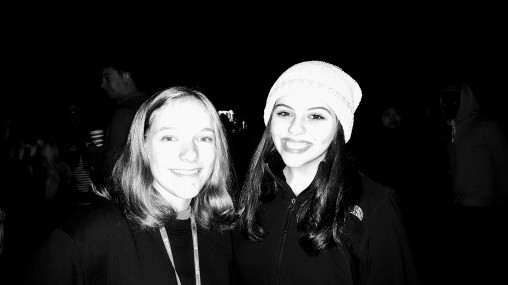 And for the main attraction of the recap – BOOKS!!!!

Brief Review: This is an example of a book I might never have read, but so many other bloggers enjoyed it and it sounded so adorable, I had to read it. As the title suggests, it’s a modern take on Cinderella where the movie star is the prince and the girl is a fan of a Star Trek-like series. Sounds like a perfect fit for me and I did enjoy it. But I didn’t love it. In fact, I felt the story got a little bogged down by trying to conform too closely to the Cinderella myth. Those classic fairy tale parts felt the least authentic to me, they felt almost forced. That said, I loved the characters and, mostly, I love the one way it did break from tradition – there was no love at first sight. I won’t say more as I don’t want to spoil it. It’s a fun read and despite some of the drawbacks mentioned, I really did like it. 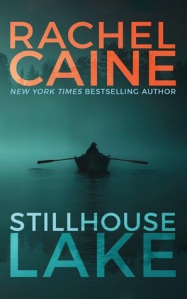 Brief Review: This is an example of a book I probably never would have read if it weren’t for a little note in the bookstore telling me to buy it. (I’m a sucker for those handwritten recommendations by the bookstore staff, particularly in genres I don’t read often, such as thrillers.) This was another book I liked but didn’t love. It kept me on the edge of my seat and I really enjoyed the mother/daughter/son dynamic. The main character’s strength and growth were the best part. But it was predictable. I was yelling at her saying “IT IS THAT GUY!!! DON’T YOU SEE IT???!!” from about page 20, or whenever “that guy” was first introduced. Frustrating, but it’s hard for me to blame the author. It’s my superpower. I always know who did it. Like Geekerella, Stillhouse Lake is a fun read filled with twisted thriller scares and characters you care about. If you like thrillers, I think it’s a good one. (Although, full disclosure, I don’t read a lot of thrillers.)

One of Us Is Lying by Karen M. McManus

Brief Review: This YA murder mystery hooked me immediately. And my favorite part, while I had about two to three possible scenarios as to what happened or “who done it” swirling in my head after chapter one, I wasn’t certain which one was right until the back half of the book. Comparatively, in Stillhouse Lake, I knew it from the beginning. In this book, it took me longer to be certain. It’s billed as The Breakfast Club meets Pretty Little Liars, an apt description. I enjoyed the fast-paced writing and the unreliable narrators. At times I couldn’t always distinguish the different first-person voices and had to remind myself whose section I was reading. But that’s a small thing. I know switching first-person narratives between four different people is very difficult! All and all, I loved this book.

Life As We Knew It by Susan Beth Pfeffer

Brief Review: Oh this book. I have such a love/hate relationship with it. If you’re someone who enjoys post-apocalyptic fiction and YA, you’ll probably love this book. My problem with it is probably one of the reasons the book is so good. It’s too realistic. In the story, the world goes to crap after an asteroid knocks the moon out of orbit. Tsunamis, volcano eruptions plummet the earth into a wasteland. In a first-person diary format, the reader experiences this through the perspective of a teen girl and her family who live in a remote-ish area in Pennsylvania. While the science behind the post-apocalyptic disasters is questionable, the responses of the characters are not. It’s chillingly realistic. Too realistic for me. Although the disasters occur in the book as a result of the moon’s orbit being out of whack, it hearkens a little too closely to the consequences of climate change, which are very, very real. If you want to prepare for your future, read this book. 😉

The Crossover by Kwame Alexander 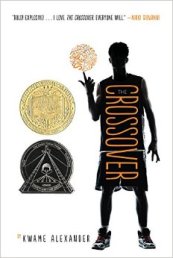 Brief Review: If you’ve read this far, you know my adoration for Kwame Alexander. I’ve read his other work, but I had not yet read his award-winning book of poetry, The Crossover. I was not surprised that I loved it. The way Alexander combines the lyrical rhythm of poetry with storytelling still feels fresh and unique, even though I’ve read his other work. In this story, twin brothers come of age in the backdrop of middle school basketball. For these two hoops stars, who always win, they must learn what it really means to lose. The book is charming, heartwarming and heartbreaking. I’m a fan. I think everyone should read it.

Brief Review: This book was given to me as a gift and also falls into the category of a book I would not have picked up on my own. But it was the perfect book to end the month! If there was a genre of creepy books about writers, this would fit right in. A little bit supernatural, a little bit noir mystery, a little bit Dickensian, the book follows the life of writer David Martin as he grapples with what being a writer does to your soul and how it can consume you if you let it. Any writer would relate to this tale of obsession and vanity with a bit of the supernatural stirred in. And any reader, no matter your profession, I think would easily fall into the rich story.