Life-Changing Books: Review of Me and Earl and the Dying Girl (Guest Blogger Emma Flood)

The following is a guest blog by a young writer and poet, Emma Flood, who has contributed previously to this blog. Glad to have her back again! This time she reviews one of her favorite books and explains how it kinda changed her life. (That’s the best compliment I think you can give a book.)

The book: Me and Earl and The Dying Girl

This book….changed my life in an odd way. 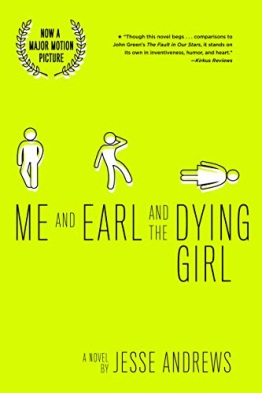 I always saw myself as the therapist friend growing up. Greg Gaines, the main character, was me for all intents and purposes. Floating between crowds and never really finding his own place expect beside his best friend Earl, the last thing he thought would happen was his mother forcing him to hang out with a childhood friend diagnosed with cancer.
The interesting thing about this book is that, in a sense, it isn’t.

Greg himself says “I’m not really putting this very well.”

My point is this: This book contains precisely zero Important Life Lessons, or Little-Known Facts About Love, or sappy tear-jerking Moments When We Knew We Had Left Our Childhood Behind for Good, or whatever. And, unlike most books in which a girl gets cancer, there are definitely no sugary paradoxical single-sentence-paragraphs that you’re supposed to think are deep because they’re in italics.

And, unlike most books in which a girl gets cancer, there are definitely no sugary paradoxical single-sentence-paragraphs that you’re supposed to think are deep because they’re in italics.

Do you know what I’m talking about? I’m talking about sentences like this: The cancer had taken her eyeballs, yet she saw the world with more clarity than ever before. Barf. Forget it. For me, personally, things are in no way more meaningful because I got to know Rachel before she died. If anything, things are less meaningful. All right?

He knows she is going to die, and thus we know she is going to die. But still—we don’t know until we know. It doesn’t hit us until it does. Contrary to the above, there are a few insane one liners that might have become infinite in wisdom without the intention to be so, but they’re there nonetheless.

This book is written for teens, by someone who is as close to a teen as he can get without a time machine. It’s full of bitter truths, bargaining with whoever comes before God, and trying to realize that it’s okay for life to suck, sometimes. It doesn’t mean it’s the end of the world. Even if it is, that’s fine too.

I think this book is something everyone should read, because not only does it remind you that we are all human and death is a side effect of living, but it does so with the perfect tinges of humor and sadness that round out the teenage-angst experience without giving it such a degrading title to begin with. This book is, in essence, the human condition without having to focus on the after. It lets you feel the feeling. I think that’s something we’re all missing, nowadays.

Jesse Andrews once said “Just because something is weird and hard to understand doesn’t mean it’s creative.” This book, while slightly…weird…is not hard to understand. It’s three teenagers with no true crowd: one dying, one emotionally stunted, and one satirical approach on a comic relief and mystery-man character all tied into one that he somehow is both the most important and least insightful all at once. Trust me, if you read this book, somewhere inside of it you will find at least a part of yourself. And God forbid if you ever find yourself grieving young, it will teach you how to let go…and more importantly, how to hold on—healthily.

One thought on “Life-Changing Books: Review of Me and Earl and the Dying Girl (Guest Blogger Emma Flood)”