A World Within a World: Singapore’s Unusual Biodomes

In one world, Alice ponders a giant mushroom inside an arid wonderland. Two rabbits mirror each other with claws up as if fighting their own reflections. The scent of flowers fills the air.

In the lost world next door, a skyscraper sized waterfall beats against the ground. Mystical sculptures hide within a tangle of exotic plants. The paleolithic era of giant plants and vines weaves up a mountain.

These are the Flower Dome and the Cloud Forest, two separate worlds encased in half-moons of glass on the edge of Singapore’s Gardens by the Bay. Both magical and beautiful biodomes evoke an ancient, organic sensation nestled in with fairy tales and science fiction. Upon entering each world, it is as if you’ve been transported to an experimental outpost on Mars built by people with an interesting sense of humor. 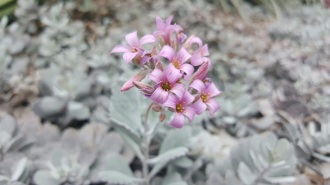 Approximately mid-way through our trip to Singapore, my best friend and I had visited botanical gardens, eaten at Michelin star restaurants and visited a strange park with life-sized dioramas of Chinese folklore. But our next adventure took us to what felt like another world.

One of my favorite songs of all time is the melancholic, dream-like “Can’t Make a Sound” by Elliott Smith. In it, there is a line that says “Why should you want any other when you’re a world within a world?” The ethereal, other-worldliness of that song reminds me of wandering beneath that arching dome, separated from the Singapore skyline by a layer of glass. Outside, lightning struck, thunder growled. Inside pink petals gleamed, refusing to acknowledge anywhere else existed except this whimsical place of flowers and fairy tales.

A world within a world.

At the top, a desert of dusty gray and brown succulents overlooked a valley of bright flowers. Here Alice frolicked in a wonderland of spiky plants and brittle, curling trees formed into giant mushrooms. Clean and refreshing air hit my lungs, and a subtle floral scent followed us along twisting pathways. Perched on a sand-colored rock formation, a dragon watched over the visitors as if ready to defend his kingdom. 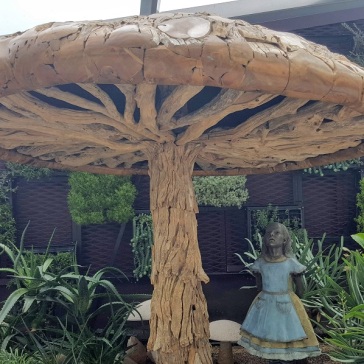 Flowers nestled into hills and pockets. Trees out of a Brother’s Grimm story stood next to animal sculptures hidden behind fields of yellow and orange.

Even Winnie the Pooh enjoyed a little walk through the Flower Dome Garden. 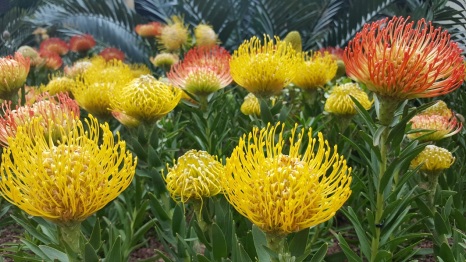 As night fell, my best friend and I moved to a second world within a world, a misty jungle reflection of the fairy tale Flower Dome. A verdant mountain showered ribbons of water down at the entrance, turning the cement floors slick. We guarded our phones and cameras from the spray of the waterfall as we peered upward.

The air grew thick with moisture, coating our lungs and acclimating us to the new environment. A spring day scent nestled into our quickly dampening hair.

We followed a sign pointing us to the Lost World, a place high up at the top of the cloud dome. An elevator brought us to the apex where we peered out from the mouth of the waterfall. Below lush plants and bright tropical flowers flowed outward.

As we walked along a steel catwalk, a futuristic pathway circling ancient mountain foliage, mist gathered. It fogged the air and cemented us inside the cloud. Ever so slowly, slow enough to enjoy each leaf, flower and even slow enough to enjoy the cool mist on our skin, we strolled down to the ground.

The sun followed our decent, lowering us into darkness. When we returned to the base of the mountain, we exited into a mystical forest where stalagmites sprouted up like flowers and stalactites dangled like icicles. Lights twinkled, little stars lighting our path in the green darkness. 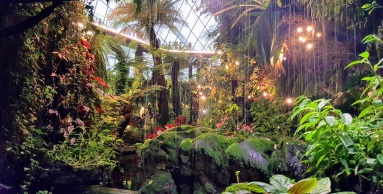 The Cloud Forest was beautiful during the day, but at night it became a land of mystical wonder. I swear I wouldn’t have been surprised if the giant snail sculpture decided to talk or if the lion’s mouth shaped wall might open into some kind of fairyland.

Leaving the biodome was like closing a really good book and trying to come back into reality. The atmosphere lingered. 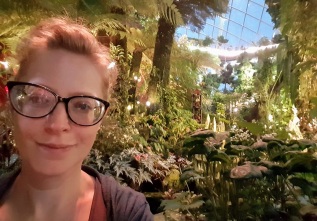 That’s what it was like. The Flower Dome and the Cloud Forest clung to me for the rest of the night and into the next day. They’re both still there, a dreamlike sensation tickling the back of my mind, stoking my imagination. I’ve visited other biodomes, but the Flower Dome and Cloud Forest in Singapore were like nothing I’d experienced before.

6 thoughts on “A World Within a World: Singapore’s Unusual Biodomes”