The Day K.L. Meets Her Favorite Author (And Makes a Fool of Herself) 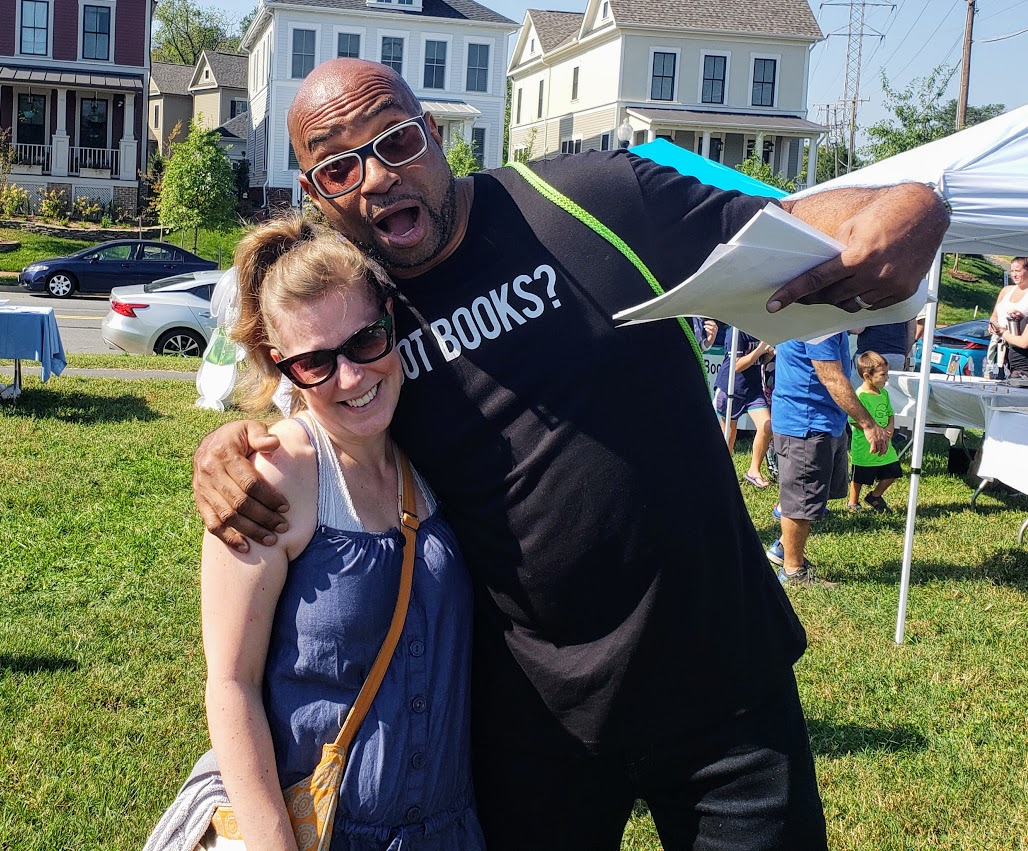 Although the exchange took approximately 30 seconds and six words, I walked away from meeting my writing idol, Kwame Alexander, filled with equal parts elation and embarrassment.

Here’s how it went down.

It all began a week ago.

Facebook, the terrible, clairvoyant, blunter of rational thought, blinked with a notification about a literary festival in a nearby town. If it’s about books, I’m interested and Facebook knows it. (Scary.) I scanned the line-up and there, in big bold letters, it read: Kwame Alexander.

At seeing the name, I clapped my hands together and a squealed like a child who just got a pony. Immediately, I shot off an email to my family informing them of how I would be spending my Sunday. (They could join me if they’d like or not. But I was going.)

If you frequently fly on my blog, you may have noticed I LOVE KWAME ALEXANDER. Not in an inappropriate way. It is probably better to say I really admire him. But if I had to count the ways… I love him for making poetry cool again… I love his enthusiasm for reading and learning… I love his bright, positive nature… And I love his writing.

I’ll stop at four, but I could go on.

A man to admire.

In all seriousness, Kwame Alexander has the kind of author story one can only admire. In college, he traded the study of medicine for the study of writing, despite initially receiving a C in a poetry class. The grade only made him more determined.

After college, there was no insta-success for Kwame Alexander. He worked hard.

“He gave poetry readings at universities, coffee shops, churches, community centers and any other place that would have him. He sold copies of his self-published poetry collections for around $10 a piece.” – The New York Times

For 10 years he ran his own publishing company, the Alexander Publishing Group. Then came The Crossover, an aptly named book for his crossover from struggling writer to award-winning author. The book of poetry tells the coming-of-age story of two brothers who play basketball. It won countless awards, including the Newbery Medal and Coretta Scott King Award of Honor.

The Crossover was not my first introduction to Alexander’s work. In fact, I became interested in the author before reading anything he’d written. Again, the witchy powers Facebook manipulated my world. One day a vlog called Bookish popped up as a suggestion. I clicked. There was Kwame Alexander reading a poem from his book Solo, while a musical friend played an accompaniment on the guitar.

His excitement for poetry, his creativity and his warmth were infectious. I bought the book Solo the next day and finished it two days later, underlining and bookmarking passages for their lyricism or emotional impact so I could re-read them later. The way he used poetry to tell a story felt fresh and unique and important. Poetry has always had a little piece of my soul and Kwame’s poetry reminded me of that.

Entry to the festival: One smile.

As I entered the festival, I was ill prepared. I don’t know what I expected. But I didn’t expect the first face as I craned my neck around the corner to be Kwame Alexander, just sitting casually in a chair, wearing a green backpack and a smile.

A half-moon of teeth must have taken over my face because he looked at me and his own smile grew bigger in acknowledgment. My insides squeezed with excitement and nerves. Grabbing my husband’s hand, I yanked him down into a row of chairs.

A woman in a yellow dress and a truly awesome blonde mohawk-like haircut stood at the front of the room, holding up a book. I tried to focus on her. Snippets of words bounced against my head. Artist. Children’s book. But my mind kept slipping back to how I would get over my crippling inability to walk up to Kwame Alexander, a stranger, and form actual words.

A smile, a wave, a polite nod, even an “I like your shirt!” These brief interactions with strangers I can handle. They come naturally. If I’m at the grocery store fawning over the limited-edition cotton candy grapes and a stranger next to me voices her mutual love for the tiny bites of sweetness, I will likely talk to her about it. This is because the stranger opened the door and invited me into the conversation. But the cold call version of meeting someone? Nope. It’s the stuff of nightmares for me.

Following the presentation, I glanced back nervously and watched as a group crowded around Kwame. Being the coward that I am, I used the thickening circle surrounding him as an excuse to wait until later to approach him. Instead, my husband and I left the air-conditioned indoor portion of the festival to peruse the collections of white tents and colorful tables in the grassy field outside.

The poet and the mute.

As my husband hopped from shadow to shadow to avoid the hot fall sun, I spotted Kwame. Fingers tucked into the strings of his green backpack, he wandered from vendor to vendor, chatting like he was just a regular person and not a literary giant. My feet pumped back and forth whenever he moved to a new table, as I chickened out again and again.

Finally, my husband decided he couldn’t take it anymore and threatened to go over to Kwame himself if I didn’t.

Sucking in the sunshine as if it might give me strength, I watched as Kwame strode through the grass in my direction. My nerves made me deaf to the wild beating of my heart.

Leaping into his path like a terrifying bunny, I stretched out my hand and managed to sputter out six words. “Kwame Alexander?” (In my head, I thought ‘why are you saying his full name, dummy. That’s weird!!’) “Hi! I am Kristin.”

All the other things I wanted to say caught in my throat. Simple things like: “I love your work,” or “I am a huge fan,” or “reading Solo changed the way I think about poetry and writing,” even “you are my writing idol” got stuck in the teeth of my wide grin. Worst fangirl ever!

After that, I kind of blacked out from the intoxicating overload of excitement and embarrassment. (For the first time, I fully understood the term “star struck.”) My husband, seeing my tongue-tied madness, suggested we take a picture and said something to the effect of, “my wife is a little obsessed with you.” To which Kwame kindly laughed instead of cringing. He gave me a hug and posed for a picture. I remember he was very tall. (And I am grateful for the photo evidence as I don’t remember much else.)

I stumbled away from the scene like a girl drunk on happiness. Sure, he’d never remember meeting me, unless being a verbally stunted, gawking moron is memorable. But I didn’t care. That’s the thing about meeting a person you admire. It’s more about finding out they’re real. It’s even better when they live up to the hype in your head, which Kwame Alexander definitely did.

Curious about the author I am so enamored with, my husband did a little research on Wikipedia. He discovered Kwame Alexander lives pretty close to us and even attended the same college as me, Virginia Tech. Although we weren’t there at the same time.

I mention this not because I have plans to stalk him in the near future, although after reading this blog you might think me capable. In fact, I learned about my geographic proximity to him well after I became a crazy fangirl.

Instead, I mention it because I find it interesting how people can shape our lives in such unusual ways. Yes, I graduated from Virginia Tech. It was a fine school and I received a great education there. (I, too, remember receiving a terrible grade on my first writing assignment, in which I not-so-brilliantly wrote about T. S. Eliot’s The Wasteland. A grade forever marked in my brain for its transformative power.)

I never felt any significant amount of pride, or lack of pride, for the school. It was my college, that was it. And, let’s be honest, if you’ve heard of Virginia Tech it’s likely for one of three reasons: 1) football, 2) the dog-torturing Michael Vick, or 3) that mass shooting. Obviously, the latter two items are super terrible and the first, football, I couldn’t care less about.

After learning Kwame Alexander went to Virginia Tech, a sudden pride for my alma mater swelled inside me. I went to the same college as the award-winning poet and all-around awesome guy Kwame Alexander! Next time someone gives me that pinched look and says, “Isn’t that the school where <<insert chosen terrible event>>,” I can respond with “I like to think of it as the school that produced an incredible poet and writer.” Sometimes the ways in which your idols impact your life can be surprising.

Let’s Chat (because I can do that over blogs since they don’t require walking up to strangers. 🙂 ) Anyone else met their idols? Tell me it went better for you!

10 thoughts on “The Day K.L. Meets Her Favorite Author (And Makes a Fool of Herself)”